Since its announcement at 2011’s SHOT Show, the Ruger LC9 concealed-carry sidearm has generated unending complaints about its onerous, long trigger pull. At the end of July, 2014, the company released a striker-fired version of the LC9 chambered for 9mm Luger ammo, called the LC9s, with the primary selling point being a shorter, lighter, crisper, and in all other ways better trigger. Thanks to a great FFL in my area, Best Buy Surplus, who suggested I borrow one of each self-defense model from their stock, I’m able to provide the following side-by-side comparison of these CCW handguns . . .

First, by way of saying thanks, give Best Buy Surplus a call next time you’re pricing out an online firearm purchase (assuming you aren’t local and can’t just drop by). There’s plenty of stuff on their website and listed by them on GunBroker, but you’ll likely get even better pricing over the phone. They work with multiple distributors so can get just about anything, plus have ~250 or so firearms in stock including lots of police trade-ins and some hard-to-find models. I believe the going rate on LC9s’es is ~$359, and they do have ’em in stock.

Ruger’s LC9 uses an internal hammer, while the LC9s is striker-fired. Although they likely could have re-engineered the trigger system in the hammer-fired pistol to create a shorter, smoother, lighter pull, I think it’s fair to say that market demand leans towards striker guns in this category of small, single-stack 9mm polymer-framed pistols, and Ruger chose to respond.

The comparison here is on trigger pull. There is really no other substantive difference between these two pistols for the shooter. The only item of note, the only other thing that stands out as being at all different is that the LC9 has a loaded-chamber indicator (LCI) “flag” on the top of the slide, and the LC9s does not: 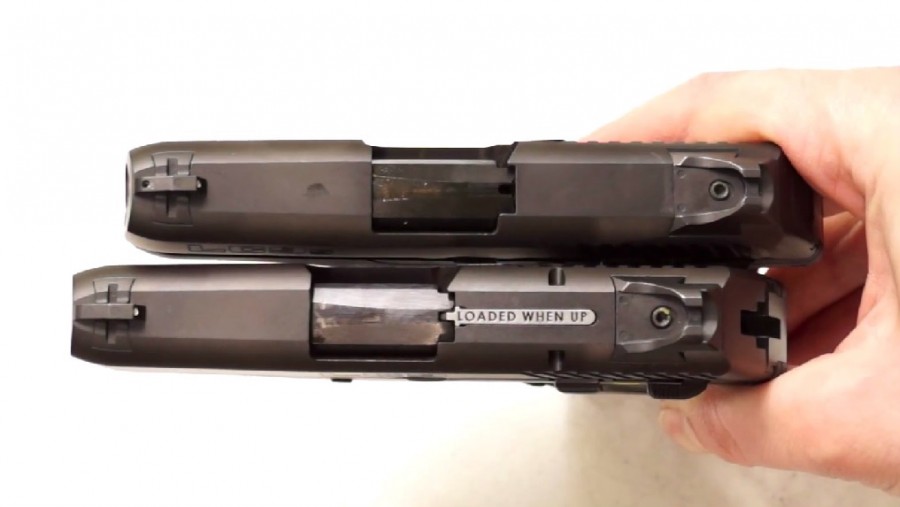 I assume Ruger did away with this once it became impossible to get new pistol models onto California’s roster of not-unsafe handguns approved for sale in the state. Instead of a bar of metal that rises up, the LC9s simply retains the notch in the chamber that the loaded chamber indicator used to fit into, but it now works as a viewing port, allowing the user to see the rim of a cartridge (or not) in the chamber. This is a really minor difference, but is my preference between the two options here. It may be slight, but any physical loaded chamber indicator will impede the round’s progress into the chamber by some degree since it has to push the indicator out of the way at the same time.

Let me first say that the trigger pull on the LC9 isn’t as bad as they say, or at least is no longer as bad as it has been historically. I have no idea if Ruger’s made changes to the mechanism, but the trigger on the new production LC9 I borrowed was very smooth. It’s still long and it still stacks at the end, breaking at the rear of the trigger guard and overtraveling the little remaining distance into it. But it isn’t the horrific, gritty trigger a lot of folks talk about. The one I used in the comparison was smooth. It also broke in the same place every time — a consistent, decently clean break. I measured the trigger pull weight at 6.75 lbs.

Both triggers suffer from a near complete lack of an audible or tactile reset. This remains the sole legitimate flaw on the LC9s’ trigger, and it’s a pretty big one in my opinion. I like to ride the trigger reset when I’m shooting, and it really isn’t something you can do on either of these models. They’re both identical in this regard, and they’re both horrible in this regard. You basically have to slap the trigger, because there’s no other way to know if you’ve let it out far enough to reset. Both triggers reset at the extreme front of their travel.

Although I was pleasantly surprised by the smoothness of the LC9’s trigger, the new LC9s‘ trigger is undeniably much better. It only travels rearwards about half the distance, before a clean and crisp break. There is no change in double action trigger pull weight leading up to the break (no “stacking”), and there is very little overtravel. The trigger stops well ahead of the back of the trigger guard. It’s definitely easier to shoot this trigger rapidly and accurately. Pull weight came in at about 4.8 lbs.

Both triggers are metal, which I like. The LC9s trigger does get a little blade safety a la GLOCK, which the LC9 trigger doesn’t.

The video at top has close-up, slow trigger pulls and resets so you can see the difference in travel length, break, and reset distance with your own eyes.

I wouldn’t be surprised if Ruger phased out the original LC9 carry gun completely. Considering it has an internal hammer so it cannot be manipulated manually, and it isn’t a true double action in that the slide does have to cycle in order to reset the system, I can’t think of one reason whatsoever why anybody would want the hammer-fired model over the striker-fired one. The trigger on my LC9s subcompact striker gun was simply better in every way in which they differ. Both single-stack guns require a couple more steps to field strip than the norm, but the striker gun does add the need to pull the trigger first. As both pistols have magazine disconnect safeties (trigger will not pull unless a magazine is inserted), the LC9s pocket carry gun actually ships with a dummy magazine. This way dummies can insert it in order to pull the trigger while reducing the likelihood of having an ND. I guess.

The LC9s pocket pistol wins. I’d expect the LC9 carry pistol to go the way of the Dodo.

Ruger LCP .380 Holsters: How To Carry A Pint Size Pistol

Electronics and an LCP II: Everyday Carry Pocket Dump of the Day

GLOCK 43 or GLOCK 42? : Everyday Carry Pocket Dump of the Day