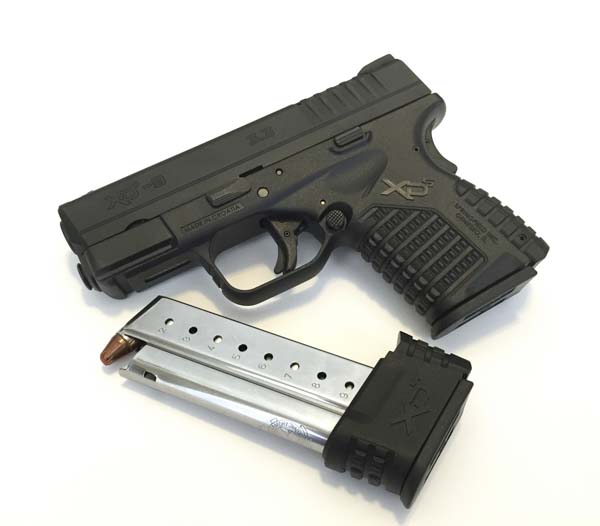 The Springfield XD series of handguns evokes a wide range of feelings in the gun community. For every person who appreciates the XD series as a viable handgun option, another person will claim they refuse to buy one because they see it as a fancier GLOCK without a significant value-add. Personally, I’m a fan—one of my first handguns was a 4.5” 9mm Springfield XD(m), and I’ve always had good success shooting it. For that reason, when Springfield announced the single-stack, nearly pocket-sized XD-S carry handgun, I immediately wanted to take a closer look.

Springfield offers the XD-S in a variety of configurations, differing only by barrel length and caliber. The smaller 3.3” model is available in 9mm, .40, and .45ACP, while the larger 4.0” model comes in 9mm or .45ACP. The model used in this review is a 3.3” 9mm version with an MSRP of $499.99, and this particular gun is a post-recall XD-S. I’d like to make a quick note about that recall before discussing any other aspects of the XD-S. In August 2013, Springfield issued a recall of both the 9mm and .45ACP XD-S models for an issue where it was possible for the gun to fire while chambering a round. This is obviously not something that should ever happen with a modern firearm, and Springfield rightfully received a torrent of criticism from the gun community for both the necessity of the recall and their handling of it. That said, by all accounts the problem has been successfully resolved by Springfield. Users who had both a pre-recall and post-recall XD-S have generally reported that the trigger pull feels smoother, albeit slightly heavier than the original version of the gun. Needless to say, there is plenty of discussion in the online community about the recall, and I won’t cover it in any more detail here, but my personal opinion is that the post-recall version of the gun is as safe and reliable as any other gun I’ve handled. My first impression upon seeing the XD-S is that it looks like a serious tool. Springfield ships everything in a heavy-duty molded plastic case with foam cutouts for the gun and included magazines, paddle holster, and magazine holder. The frame is molded in an aggressive way that gives the shooter a firm grip on the gun, and the slide consists mostly of straight lines with a series of cocking serrations along the rear.

Overall, it looks like it’d be home in a gritty, slightly futuristic thriller. Function aside, I can appreciate a cool-looking gun and the XD-S certainly fits the bill in that regard. The design is functional as well—I feel like I can get a very strong grip on the gun due to the way it’s designed. However, the physical design of the XD-S leads to one disadvantage: it makes the gun a bit less concealable than other guns of a similar size. In my experience, the blocky slide and rough grip texture make the gun more likely to “print”, or show a visible shape, under clothing. It’s still a small gun, and is fairly easy to conceal, but I have a hard time singing the praises of this design for concealability with other choices like the Ruger LC9s Pro and Smith & Wesson M&P Shield providing more concealable options for this class of gun. For a handgun intended for concealed carry, I think Springfield should have deviated from the trademark styling of the XD series a bit to round the edges of the XD-S.

As far as the rest of the physical design, the XD-S includes an ambidextrous magazine release, which is a welcome addition on any handgun. The slide stop and takedown lever on the left side of the frame are both low-profile to avoid snagging on clothing or holsters. 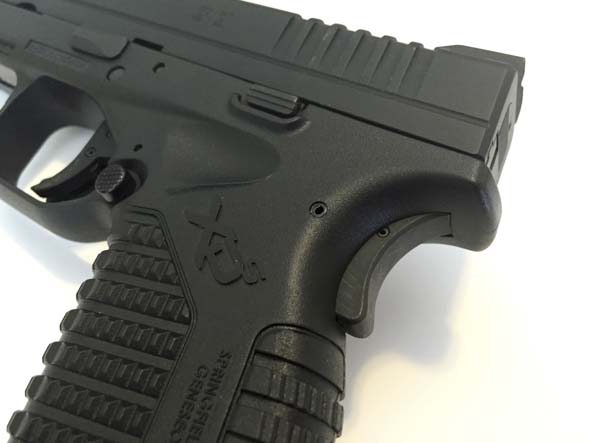 The XD-S (and the rest of the XD series) also includes a grip safety. I’ve seen widely differing opinions on the idea of a grip safety, with some shooters choosing the XD-S specifically for the added safety feature and others avoiding it for the same reason. I’m indifferent about it; in my testing I was unable to grip the gun in such a way that I would be able to pull the trigger without also depressing the grip safety, but I can understand the complaints about it adding another point of failure to the weapon.

One other bonus Springfield included on the XD-S is a standard accessory rail on the front of the gun. I’m appreciative of this feature because it allows me to mount a standard weapon light rather than needing to purchase a special model made specifically for the XD-S. I had no trouble mounting a Streamlight TLR-1 on the rail and like having the option of doing so. Unlike extended magazines for some other guns I’ve used, the 9-round magazine essentially makes the XD-S feel like a full-size handgun. I’m satisfied with the grip I can get on the gun with the flush-fit magazine, but the gun is more pleasant to shoot with the extended magazine inserted. Another standout feature of the XD-S are the factory sights. The gun features a fiber optic front sight with a two-dot rear sight, which is a configuration that provides excellent rapid target acquisition and adequate performance in lower-light situations. Springfield even includes spare fiber optic tubing, allowing the owner to choose between a red or green front sight. The sights are probably the best factory sights I’ve seen on a concealed carry pistol, and the XD-S is one of the few guns I’ve purchased where I didn’t immediately want to swap the sights out for an aftermarket set. The trigger on the XD-S has similar qualities to other striker-fired handguns I’ve fired, with the take-up being a bit shorter than average. I did feel that the trigger pull on the XD-S was a bit heavier than it needed to be, but the trigger breaks smoothly and resets quickly with a tactile and audible click.

In general, I felt that the trigger was easy to shoot quickly with, but the heavier-than-necessary weight was amplifying the mistakes I tend to make in my handgun shooting form, which caused me to have a bit of trouble shooting the gun at long distances. However, I was easily able to achieve “minute of bad guy” accuracy at normal defensive handgun range and I have no doubt that a better handgun shooter could achieve impressive groupings with the XD-S.

I enjoyed shooting the XD-S at the range more than I have with other handguns of this size. For a single-stack 9mm carry gun, I’ll typically be tired of dealing with the recoil and small grip of the gun after firing a box or two of ammunition at the range, but I didn’t feel that way with the XD-S. The extended magazine provides some welcome extra real estate for gripping the gun, and the XD-S generally seemed to recoil a bit less than other handguns in this size class. If you’re looking for a single gun to pull double duty between concealed carry and range use, the XD-S would be particularly worth considering.

I’ve been pleased with the reliability of the XD-S. I experienced no failures in my testing, and have tested the gun with a few different types of defensive rounds such as Hornady Critical Defense and Winchester PDX1 +P jacketed hollow points. The XD-S fed both types of rounds (as well as normal FMJ practice ammo) reliably and was accurate with all types of 9mm ammunition. For maintenance and cleaning, the gun can be easily field stripped using a takedown lever on the left side of the frame. There were no surprises upon taking the gun apart; the internals are very simple and are similar to every other polymer striker-fired handgun, with the exception of the extra components related to the grip safety. I would have no concerns about the continued reliability and performance of the XD-S for defensive carry.

The Springfield XD-S gets a lot of things right, but misses the mark in a few areas. It’s a solid offering in the single-stack carry handgun space, with excellent sights, above-average firing ergonomics, and reliable performance. However, the blocky design detracts from concealability, and the trigger pull is a bit heavier than I prefer for this type of gun. Overall, the Springfield XD-S performed very well in my testing, and while I do not currently use it as my daily carry weapon, I’d have no qualms about doing so.

Concealability: * * * *
It’s a single-stack 9mm handgun with a barrel slightly over three inches, so it’s small, but the aggressive design hurts concealability a bit. You won’t want to wear a tight shirt over the XD-S.

Ergonomics: * * * * *
The gun feels great to hold, especially with the extended magazine. Recoil feels a bit lighter than other handguns in this size class, making the XD-S pleasant to shoot at the range.

Accuracy: * * * *
Excellent sights and a relatively good trigger, but the pull was unnecessarily heavy. I was noticeably less accurate with the XD-S than some of my other handguns, but it’s certainly accurate enough for defensive use.

Reliability: * * * * *
Zero concerns here, and the gun worked great with every type of ammo I used. The XD-S has had a recall in the past, but I didn’t experience anything in my testing to suggest that any issues exist in current versions of the gun.

Overall: * * * *
The XD-S is a solid performer that is accurate, reliable, and fun to shoot. However, it’s not the best in its class in terms of concealability, so if you’re particularly concerned about the size or comfort of your carry gun, you may want to consider other offerings.