I bought my HK P7 (which now looks like this) for a screaming good price in early 2012. You see, the older gentleman I bought it from was selling all of his semi-auto pistols, as he could no longer operate them due to arthritis in his hands and generally diminished finger/grip strength. This is where Smith & Wesson’s new M&P380 Shield EZ comes in. It’s supposed to be an easy-to-operate pistol that basically anyone can run confidently.

But does it hit the mark?

As I see it, there are four major factors to operating a semi-automatic pistol that are made difficult with limited strength. Whether you’re a petite woman or have arthritis or for any other reason have lesser finger, grip, and/or forearm strength, you may struggle with the following . . . 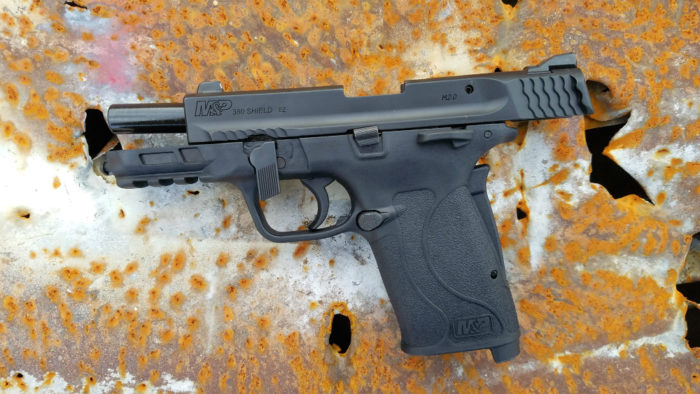 Loading and unloading a pistol requires you to manually pull the slide to the rear. Often, clearing jams and field stripping necessitates this as well. If it’s a struggle, a semi-auto may not be a good choice.

As you’d hope, racking the slide on the Shield EZ is easy. The recoil spring is soft and the internal hammer provides little additional resistance. The lockup disengages easily. It’s one of the lightest-racking pistol slides I’ve felt. Likewise, pushing up on the slide stop to lock it to the rear is accomplished particularly easily. Once the slide is locked back, rotate the takedown lever down 90 degrees (as seen two photos up), pull back on the slide to release the lock, and slide it forwards off the frame. No trigger pull is needed to field strip the EZ. 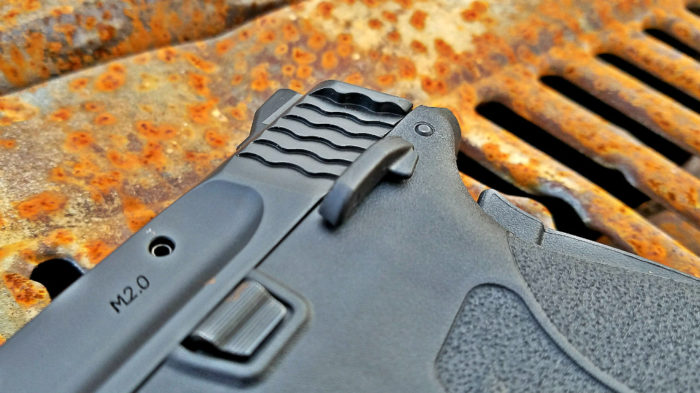 A solid purchase on the slide is also a necessity, and while I think S&W could have done even more here they’ve done very well. At the rear of the rear slide serrations is a markedly raised ledge. This provides a solid backstop for fingers and makes slipping off of the slide much less likely, even with a softer grip.

I would have gone with ledge-front rear sight as well, to add another point of gription for those who wrap their palm over the top of the slide. Or, as the marketing typically suggests, for use as a “claw” to rack the slide off of a belt, pocket, table, or other object.

Ultimately, though, manipulating the slide is probably the most critical aspect of being able to operate a typical pistol, and the Shield EZ really is about as easy as it gets. At least in the world of centerfire calibers. It takes notable grip strength, finger strength, and dexterity to load the magazines of most pistols (UpLULA aside). Much of this is due to the upwards pressure applied on the loaded rounds by the magazine spring. It has to be strong enough to push the next round up into position so it can be picked up on the slide’s return trip forwards. And it has to do this regardless of recoil motion and the weight of a full compliment of lead and brass objects on top of it.

So there’s a definite limit to how light the magazine spring can be while still affording reliable function. Though I can’t speak to how much fudge-factor (“extra” spring weight to overcome dirt, depleted uranium rounds, etc.) S&W built into the M&P380 Shield EZ mags, I can say they’re easy to load.

The single-stack design helps, as these magazines are almost always easier to load than double-stack mags. With less ammo and less ability for the rounds to shift around, the spring just doesn’t have to be as stiff.

But S&W took another step towards easy loading and added finger pegs on the follower. As seen on many .22 LR pistols, this allows the user to pull down on the follower while loading the next round. It’s an easier proposition than trying to depress the top round with one finger while simultaneously depressing it with the being-loaded round while it’s also being crammed back under the feed lips.

Whether you load the Shield EZ magazines by pulling down on the follower and literally dropping the next round in or do a pull from the bottom while pushing from the top hybrid maneuver, the end result is a much easier-to-load magazine than the standard semi-auto. Capacity, of course, is the only real downside here. The frame of the M&P380 Shield EZ is wide enough to accept a staggered magazine. Possibly not a full-on double-stack, but staggered for sure. It might be capable, for instance, of 11 rounds in the mag instead of eight.

Creating room for the follower’s finger pegs and sticking with a typically-easier-to-load single-stack mag meant not using all of the grip volume afforded to it for ammo capacity. As you can see above, there are ribs molded inside of the grip to center the skinny magazine body and provide clearance for the follower pegs.

Smith’s choice of easy loading over capacity wasn’t made by mistake. However, if there’s a flaw with the Shield EZ it’s magazine-related: it’s particularly difficult to lock a fully-loaded magazine into the grip when the slide is forwards. You either have to push up on the basepad extremely hard, punch it firmly with the heel of your hand, or put a thumb on top of the slide and fingers under the magazine and squeeze like you’re trying to milk a rock. Different pistol models have different controls, and user preference varies. One thing that stays true, though, is that the controls should be usable and well-placed, which unfortunately is not always the case.

With the Shield EZ, we found nothing to complain about. The slide stop is easy to reach without being in the way at all, and it’s easy to operate. Likewise, the magazine release is positive and very easily activated, while still just stiff enough and shielded enough to prevent depressing it accidently.

Users with less finger strength will find the flip-down take-down lever easier to use than the small, pull-down tabs or pull-out pins on many competitors’ products.

Even the trigger strikes a great balance between safety and ease of use with its just over four-pound pull weight. Small hands with short fingers shouldn’t have difficulty reaching it, either. Hotly contested though they are, if you choose the Shield EZ with manual safety (there’s also a model without the manual safety) you’ll be glad to know that the safety lever, too, is easy to operate and well-placed. The safety snicks on and off smoothly and easily with a clean click on each end. I’d personally prefer a stronger detent, but for the purposes of the EZ it makes sense to make it, you know, easy. Not unsafe, mind you, but it isn’t as stiff as many manual thumb safeties.

I could also see lowering the ambidextrous levers to make them that much easier to reach for those with short thumbs, though very few are likely to have a problem there. The length of the safety levers and their serrations make them harder to miss and easier to operate, whether flipping them up (safe) or down (fire). Finally, a grip safety adorns the back of the grip (where else?). This is a passive safety, disengaged automatically when the user acquires a typical shooting grip.

Unique in its bottom-hinged design, I found the EZ’s grip safety entirely unobtrusive. Though it does not depress flush with the back of the grip, which could, in theory, let the user get higher up into the beavertail, it’s hardly noticeable on the palm or in the web of your hand. There’s also no chance of gripping the gun in any sort of semi-normal fashion and not disengaging this lightly-sprung safety.

This, of course, isn’t specific to semi-automatic pistols but applies to all firearms. However, in the realm of pistols, poor recoil control can lead to malfunctions. The slide must cycle fully to the rear, and if the frame is also moving rearwards this may not happen properly. A stiff recoil spring and a difficult-to-control gun can exacerbate the issue.

Thanks to the M&P380 Shield EZ’s slim grip with good ergonomics and grippy texture and its nice little beavertail, shooters with most any hand size will have no problem acquiring a high, solid, secure grip. Thanks to the .380 ACP chambering, which puts out about 56 percent the energy of 9mm, and the tilt-barrel short recoil operation rather than straight blowback operation, the Shield EZ shoots very softly.

It’s also large enough to allow a full grip. Even I found my pinky securely on the frame, not on the magazine baseplate or under it. All too often we see sales guys, friends, and significant others recommend pocket pistols to women — small person, small gun, right? — but that’s a recipe likely to backfire. Harder to grip securely and harder on recoil, those tiny, lightweight guns are difficult and unpleasant to shoot.

Striking a great balance between mouse gun and duty gun, the compact or sub-compact M&P380 Shield EZ provides a healthy sight radius, a full grip, proper control ergonomics, and 18.5 ounces of recoil absorption. It shoots every bit as soft and as flat as you’d hope. Though the rear sight on my Shield EZ clearly needed to be drifted right to line up point of impact with point of aim, I found the little pistol to be very accurate. Above is a five-round group shot slow, off-hand, with 95 grain Blazer Brass from Freedom Munitions (coupon code TTAG for 5% off everything on their site). And it sang the same tune with Hornady Critical Defense.

With the great trigger, decent sight radius, and Charmin soft recoil, the M&P380 Shield EZ is an easy gun to shoot accurately.

It’s reliable, too. In 500 rounds of mixed ammo, from Freedom Munitions 100 grain flat nose to Alchemist Ammunition 75 grain frangible to three brands of self-defense hollow points, we didn’t suffer a single hiccup. The EZ ran everything and was a pussycat on recoil even with the self-defense stuff. Due to its .380 ACP chambering, the M&P380 Shield EZ may not be for everyone. Most self-defense guru types will suggest 9mm if you can shoot it confidently. But the “confidently” part comes first. You have to be able to operate the gun and you must be able to put rounds on target. Shot placement is king.

Everything about the Shield EZ makes pistol operation and shot placement easy. It shoots as flat and as soft as can be. For me, I was able to dump rounds right on target as fast as I could pull the trigger. For the EZ’s target market — those with limited grip strength — it’ll likely get you back in the semi-auto game.

The easy to rack, easy to load, easy to shoot, easy to field strip M&P380 Shield EZ is possibly the best semi-auto, centerfire pistol going for those who find operating pistols difficult. It fills a need, fits a niche, and does it extremely well.

Reliability * * * * *
Flawless function straight out of the box.

Accuracy * * * *
Point of impact was a bit off as the gun shipped, but the EZ is an accurate shooter that’s easy to shoot accurately.

Overall * * * * *
Well-deserving of a full five stars. The EZ delivers on all promises. Side note: the breech block is pinned into the slide rather than machined in as an integral part. While this could be due to manufacturing limitations, it may also indicate that Smith & Wesson plans to release other calibers in a Shield EZ format. This is pure speculation, but a swappable breech face certainly makes that easier.