If you poll gun owners about what they consider to be the most appropriate handgun for concealed carry, you’ll likely get answers ranging from a .22 mini revolver to a .50 AE Desert Eagle. Suffice it to say that opinions vary, and it’s up to each individual to decide what size gun they feel comfortable with as a carry weapon. Personally, I feel that single-stack 9mm handguns strike an excellent balance between concealability and effectiveness, so I typically use one as my EDC weapon. And when this category of guns comes up in conversation, the Ruger LC9s Pro is almost always mentioned, and for good reason.

Ruger has released a total of three guns in the LC9 series. The original LC9 was introduced at the 2011 SHOT Show and included a notoriously bad double-action trigger, a frame-mounted safety and a magazine disconnect. They updated the design in July 2014 with the LC9s, which replaced the double-action trigger with a striker-fired design but retained the manual safety and mag disconnect. In December 2014, Ruger came out with the LC9s Pro, further building on the LC9s by removing the manual safety and magazine disconnect.

You’ll find endless debate in the gun community about whether features like manual safeties and magazine disconnects are a help or a hindrance. Ruger, wanting to cover their cases, offers both options in the LC9s and the LC9s Pro. Ergonomics
Size and shape are clearly important aspects of a handgun intended for concealed carry, and the LC9s Pro hols up well in this regard. The frame has smooth, rounded edges, which not only makes the gun more comfortable when pressed up against your body for long periods of time, but also reduces the likelihood of the gun’s outline being noticed by others when wearing tighter clothing.

The top and front of the slide are curved slightly too, and the factory sights are a low-profile design that won’t snag on clothing or holsters during the draw. On this Pro model, the lack of a manual safety also means that the only protruding controls are the slide stop and magazine release. All of these factors work together to make a very concealable handgun. Of course, a smaller gun also means less space for ammo, so magazine capacity is typically lacking in handguns intended for concealed carry. The LC9s Pro is in the middle of the pack in this regard, with a fairly standard 7+1 capacity. Ruger only provides one magazine with the LC9s Pro—although mags are readily available, I’d have been a lot happier if a second magazine had been tossed in the box from the factory.

Ruger makes an extended 9-round magazine which lengthens the grip of the gun. It’s also possible to swap out the base plate on the flush-fit 7-rounder for one with a pinky extension. That should please shooters who don’t appreciate a dangling pinky. On the Range
One major downside to concealed carry weapons is that some of the qualities that make them excellent for concealment can make them miserable to actually shoot, so I was interested to see how the LC9s Pro would fare in a standard target shooting session. I ended pleasantly surprised at how things went, although at times I was definitely reminded of the fact that I was shooting a gun that’s more intended for slipping into a pocket holster than making bullseye shots at 50 yards.

My first impression: it’s definitely a bit harder to get a firm grip than it would with a larger pistol, but the LC9s feels substantial enough that I was able to easily maintain control of the weapon through the aiming and firing process. The 7-round magazine with pinky extension and the 9-round extended magazine both provide a noticeably larger grip area than the flush-fit 7-rounder, but I’d be hesitant to train exclusively with those options unless I intended to carry the gun in that configuration. One thing I’ll point out here is that with any handgun of this size, most shooters will need to be careful when reloading to get their ring and pinky fingers out of the way of the magazine. I managed to pinch myself a few times when reloading before I figured out that I needed to pull my fingers away from the grip a bit before inserting a new magazine into the gun. Not a major issue, but something to keep in mind with a gun this small.

The factory sights on the LC9s Pro are acceptable, but not the best I’ve seen on a handgun of this size. This is one of the cases where concealment is at odds with usability. Athough the sights are small and unobtrusive, they can be hard to visually pick up when shooting quickly, making it more difficult to take accurate shots at distance.

The sights are a standard white 3-dot arrangement. That’s fine during the day, but less than ideal for low-light shooting conditions. Fortunately, there is a decent selection of aftermarket sights available so you could easily swap in a set of fiber optic or tritium night sights if desired. Having had previous experience with the double-action trigger pull of the original Ruger LC9 (horrible as it was), I was very interested in seeing what kind of improvement the striker-fired design of the LC9s Pro offered. Fortunately it seems that Ruger has done a lot of work here. The trigger on the LC9s Pro is a night-and-day difference from the trigger in the original LC9.

The there’s a short take-up followed by a smooth, clean break with a bit of overtravel. The trigger has to be released a bit farther than I’d like before it resets, but it’s easy to tell when the reset occurs, which helps with rapid follow-up shots. I didn’t have access to a trigger pull gauge for this review, but it feels to be a standard pull weight for a striker-fired handgun, in line with a typical GLOCK or Springfield XD trigger. Overall, the trigger on the LC9s Pro is above average for this category of handguns, and lends itself well to accurate shooting. Speaking of accuracy, I had little difficulty making accurate shots with the LC9s Pro, largely due to the excellent trigger on the gun. Small carry handguns aren’t typically used for precision shooting for a reason, but I was able to easily put shots where I wanted them at standard defensive shooting distances. For fun, I decided to try a few longer distance shots at a silhouette target 50 yards away, and surprised myself by hitting the target with my first shot. I’m confident that the accuracy of the LC9s Pro is more than sufficient for its intended use case.

Due to their small size, concealable handguns typically exhibit stronger felt recoil than a shooter who is used to larger weapons may be used to. The LC9s Pro is no exception. With its snappy recoil, it’s harder to get back onto target than a larger handgun. However, the recoil is certainly manageable, and a bit more snappiness is to be expected when firing a gun that only weighs a little over a pound. You wouldn’t want to shoot the LC9s Pro all day at the range, but shooting a box of ammunition for practice is very do-able. Reliability is of paramount concern for a gun that you intend to carry. The LC9s Pro has only been available for a year and a half so reliability data is still scarce, but I’ve fired hundreds of rounds of PPU 115 grain FMJ practice ammo and several boxes of Federal Hydra-Shok 135 grain JHP defensive rounds through the gun with no malfunctions, which bodes well for long-term reliability. The LC9s Pro had no difficulty feeding the jacketed hollowpoint rounds, and overall the gun was reliable and accurate with all three types of ammunition. Field-stripping the LC9s Pro is a fairly simple affair, although it might require a small punch or other tool to remove the disassembly pin from the side of the gun. I would have preferred a design that doesn’t involve removing a part from the gun to take it down, but the pin is held in place by a latch which requires firm pressure to disengage. I’m not concerned about the pin backing out during use, and disassembly is still relatively easy.

Conclusions
Overall, the LC9s Pro is impressive and a definite step up from its predecessors. Ruger has made some major improvements in this iteration, with the striker-fired trigger being notably better than many other guns in this class. Removing the manual safety and magazine disconnect is a plus, too, making for a handgun that’s simple to operate. The LC9S’s small size means it’s easy to conceal, and since it has identical physical dimensions to the original LC9, plenty of holsters and other aftermarket accessories are readily available. 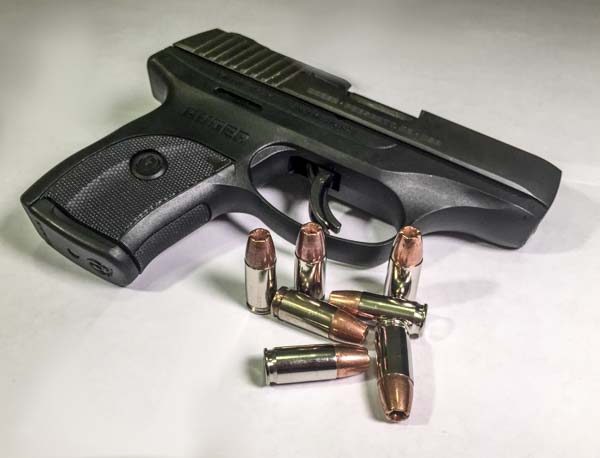 The LC9s Pro still exhibits the typical downsides of shooting a smaller concealable handgun, with minimalist sights and snappy recoil. You’ll also want to budget for a few extra magazines since the gun only comes with one. But if you’re in the market for a new carry pistol, the Ruger LC9s Pro should be a strong contender.

Concealability * * * * *
A small frame and rounded edges make the LC9s Pro easily concealable, even among other 9mm single-stack handguns. Holsters made for the original LC9 work with the newer Pro model, meaning that a wide range of options are available for carrying the gun.

Ergonomics * * * *
The gun’s smooth, rounded edges make for a comfortable grip and a snag-free draw. Firing 9mm rounds from such a small handgun produces noticeable recoil, but the LC9s Pro is otherwise enjoyable to shoot. The trigger is above average for a gun in this class.

Accuracy * * * *
It’s a defensive handgun made for close range shooting, but was extremely accurate at distances of 10-15 yards.

Reliability * * * * *
It goes bang. No failures at all with either FMJ practice ammo or JHP personal defense rounds.

Overall * * * * *
Reliable, accurate, easy to shoot, and designed for easy concealment. It’d be hard to go wrong with the Ruger LC9s Pro as your daily carry pistol.