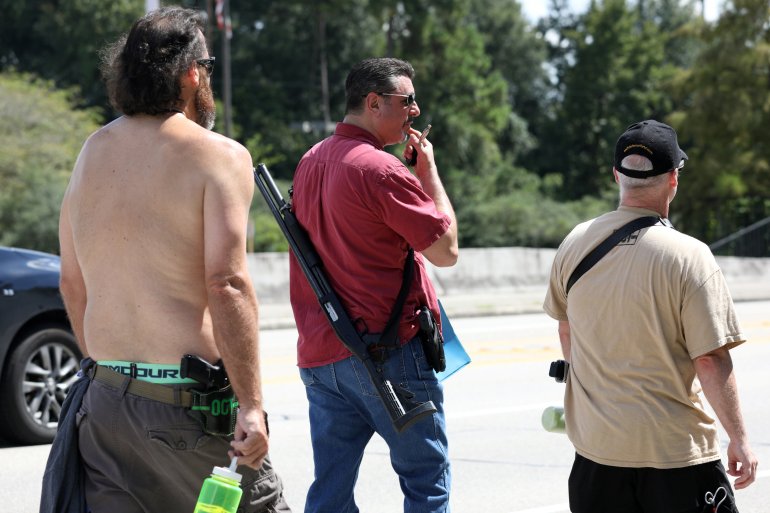 A person shall be is guilty of unlawful paramilitary activity, punishable as a Class 5 felony if he:

1. Teaches or demonstrates to any other person the use, application, or making of any firearm, explosive, or incendiary device, or technique capable of causing injury or death to persons, knowing or having reason to know or intending that such training will be employed for use in, or in furtherance of, a civil disorder; or

2. Assembles with one or more persons for the purpose of training with, practicing with, or being instructed in the use of any firearm, explosive, or incendiary device, or technique capable of causing injury or death to persons, intending to employ such training for use in, or in furtherance of, a civil disorder; or

3. Assembles with one or more persons with the intent of intimidating any person or group of persons by drilling, parading, or marching with any firearm, any explosive or incendiary device, or any components or combination thereof.

Thomas Jefferson would be so proud.

Frankly, most of that seems pointless as it would already seem to be covered by Virginia’s conspiracy law. I think number 3, however, is the real point here.

I suspect, being a Democrat, that Rep. Lucas has the Pantifa Redneck Revolt or John Brown Gun Club in mind.

But those on the left often consider simple open carry by anyone other than a police officer to be intimidating. No doubt the intended targets are folks like Oath Keepers and OC activists.

For Class 5 felonies, a term of imprisonment of not less than one year nor more than 10 years, or in the discretion of the jury or the court trying the case without a jury, confinement in jail for not more than 12 months and a fine of not more than $2,500, either or both.

With the new Democrat-controlled Virginia legislature chomping at the bit to enact new, more imaginative ways of limiting the right to keep and bear arms in the state, chances of passage seem good.