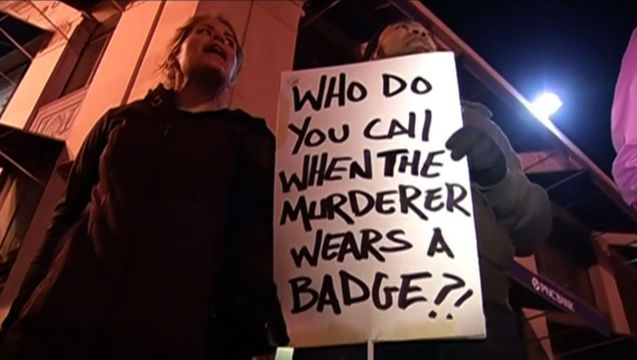 Let’s start with an assumption. Let’s assume that the standard argument about American society and race relations that we hear from academics, SJW types, and their apologists in the legacy media is generally true. Let us also assume that, based on that first point, the below statements are also correct.

(1) Everyone exhibits some degree of implicit racial bias. As the left-wing Mother Jones reported, white people “might write down on a questionnaire that they are positive in their attitudes toward black people…but when you give them a behavioral [test] of how they respond to pictures of black people compared with white people…” the implicit biases become clear.

(2) Those implicit biases impact people particularly in ambiguous situations. As one researcher put it, “A person reaching into a pocket is ambiguous. If I, as a white, middle-aged woman, reach into my pocket most people aren’t going to experience fear. For a black male with dreadlocks, that ambiguous action would produce fear in many people.”

(3) The American government was created by white people, for white people, and the scales will always, institutionally, be weighted in their favor — all else being equal. As a matter of history, the institutions of government in this country were created by men with both explicit and implicit biases (in many ways more explicit than implicit at the time the Constitution was ratified.) As a result, even if individual police officers or other government officials truly were free of their own prejudices (which they’re not, see point (1) above,) the institutional bias that exists would overwhelm the well-intentioned folks who truly judge people by the content of their characters, and not the color of their skin, from disparities in in pre-school discipline to disparities in the rates at which white and black people are shot by police officers.

(4) People are largely incorrigible on the issue of racism. There will be no magical, Gene Roddenberry-esque moment in our lifetimes in which we can finally be done with this sort of bigotry. It isn’t merely learned behavior, but is innate. (Granted, there does not appear to be a consistent #SJW line on this point, but it seems to me that innate racism makes the problem more intractable so let’s go with that.)

Some recent examples of police/citizen interactions in which racial bias (institutional or otherwise) may have placed a role range from Eric Garner, killed by New York police when they attempted to detain him on suspicion of being an illegal cigarette vendor, Philando Castile, a Minneostan with a license to carry a concealed firearm, who was shot by police when his girlfriend was pulled over for a busted taillight (yes, for the record, Jeronimo Yanez, the officer responsible for Castile’s death claims that he thought Castile resembled a suspect wanted for armed robbery. For this thought experiment, let’s assume this isn’t true.)

So, do you have arms around all of that? Good. Now let’s talk about guns.

In response to the violence of last week — in Baton Rouge, Minneapolis, Dallas, Michigan, and elsewhere — the usual suspects are calling for more gun control. But what is it that gun control would actually accomplish?

There are over 300,000,000 firearms in the hands of the citizenry in the United States right now. More if you add state and local civilian police forces (which, as we’re all civilians together, we probably should.) One study of uncertain accuracy cited by the Congressional Research Service estimated the total number of rifles in the United States at 110,000,000 in 2009.

I won’t speculate about the possible effect some gun control restriction might have had on last week’s violence. As bad as they were, those incidents were one-offs, and I suspect our readership has no need to be educated on that question. What I’d like to ask instead is: what impact would more gun control laws have had on the day-to-day lives of Americans — the African-American community in particular?

In the vision of many gun control activists, the enemy is the NRA and other law-abiding gun owners who, essentially, just seek to be left alone, free to pursue their hobbies and interests, and to own and carry weapons and other equipment for their own personal self-defense. In their minds (perhaps wrongly) the typical NRA member and gun owner is, to borrow a line from Don McDougall, an old white (or “Anglo”, as my Chicano family in Texas would put it,) man who lives in flyover country and needs to lose thirty or forty pounds. That isn’t exactly the case anymore (as McDougall reports,) but again, we’re giving the left the benefit of the doubt here, so let’s roll with it.

Who is really going to feel the brunt of any putative gun control law?

Sure, gun owners will howl. Sure, the occasional naive folks visiting New York City may be taken by surprise when they learn that their Oregon Concealed Handgun License doesn’t amount to a hill of coffee beans ground by Portland’s finest baristas there. But the truth is, if ANY of the assumptions we’ve made above have ANY validity, the people who are going to bear the brunt of the law’s effect will be those people who are experiencing the most difficulty with the law right now.

If #BlackLivesMatter to you, gun control is the last thing you want.

Think about it: if American institutions are all racist, if the police are perpetrating violence against members of the African-American community because of that institutional racism and their own inherent racism, and if at every step, justice is systematically biased against African-Americans, what do you think those same ‘racist’ institutions are going to do with a series of laws that give them still more power to observe, harass, and arrest people who are otherwise minding their own business?

If you’re concerned about the fact that African-Americans are incarcerated at six times the rate of whites, what do you think is going to happen to that disparity when the (again, ‘racist’) justice system gets one more crime, or one more aggravating factor to pile on years of a prison term?

Which community do you think these allegedly racist police forces will prioritize when choosing to devote resources toward enforcing gun control laws? The rural, mostly white hamlet with a large number of NRA members? Or an inner city mostly African-American neighborhood?

If all of the assumptions above are true, I think we all know what the answer would be.

Of course, this is just a thought experiment. Proposed gun control laws would fail the reason test even without the assumptions made above. But considering how many people — especially people on the left — are endorsing those assumptions at the moment while simultaneously calling for more gun control laws (as well as making spurious assertions about the difficulties of buying a GLOCK,) I have to wonder if they realize that those two forces are actually in opposition to each other.

Assuming facts and reason play a role in the calculus, of course. That’s one assumption that you can’t exactly take to the bank.

From time to time, though, I am pleasantly surprised.