You’re walking out of the grocery store and heading toward your car. To your surprise, you see that a violent mob has descended on the parking lot and is vandalizing vehicles. What can you do? What should you do?

What if this happens in your driveway at home, rather than a public place? What rights do you have to defend your vehicle and property? These are more complicated questions than you think.

Life Is More Important Than Property

The starting point is this: in most states, the law favors lives over things. If you catch someone breaking into an unoccupied vehicle, you may have a tough time justifying the use of deadly force to protect the property. Property damage alone, such as spray-painting your vehicle, is rarely a justification for deadly force.

However, let’s say someone threatens you in addition to some other act like vandalizing your vehicle or trespassing on your property. You may be allowed to use force — but probably not deadly force — to stop the interference.

What About An Occupied Vehicle?

The situation usually changes when the vehicle is occupied. In the case of an attack on an occupied vehicle, you are no longer just protecting your car. You’re now also protecting a human life.

If your state does extend the castle doctrine to occupied vehicles and an assailant is unlawfully attempting to forcibly enter your car — your “castle” — you may be justified in using deadly force to protect yourself depending on the laws in your state.

What Crime Could I Be Charged With?

Most states have laws against “displaying” a weapon — especially a firearm — in a threatening or alarming manner. For example, Ohio law states it is a crime to display, brandish, or indicate someone possesses a firearm.

Although different states may use a different word, such as “exhibit” or “produce,” most states ultimately criminalize the same behavior: the intentional display of a firearm in a threatening manner.

Often, there is an exception to these “brandishing” crimes if the weapon was displayed in defense of a person. For that reason, it’s not advisable to intentionally display a firearm unless you reasonably fear that a life is in danger.

Displaying a Gun Versus Pointing It

Many states also draw an important distinction between displaying a firearm and pointing or discharging one. In Florida, it’s a misdemeanor crime to exhibit a weapon in a rude, careless, angry, or threatening manner, and not in necessary self-defense.

In Texas, producing a weapon, as long as the actor’s purpose is limited to creating an apprehension that he or she will use deadly force if necessary, constitutes a use of force (but not deadly force). Complicating this is the fact that courts, district attorneys, and police officers all can have different interpretations of this statute. However, it generally means you can display a gun as a warning in self-defense and the action will not be considered deadly force. 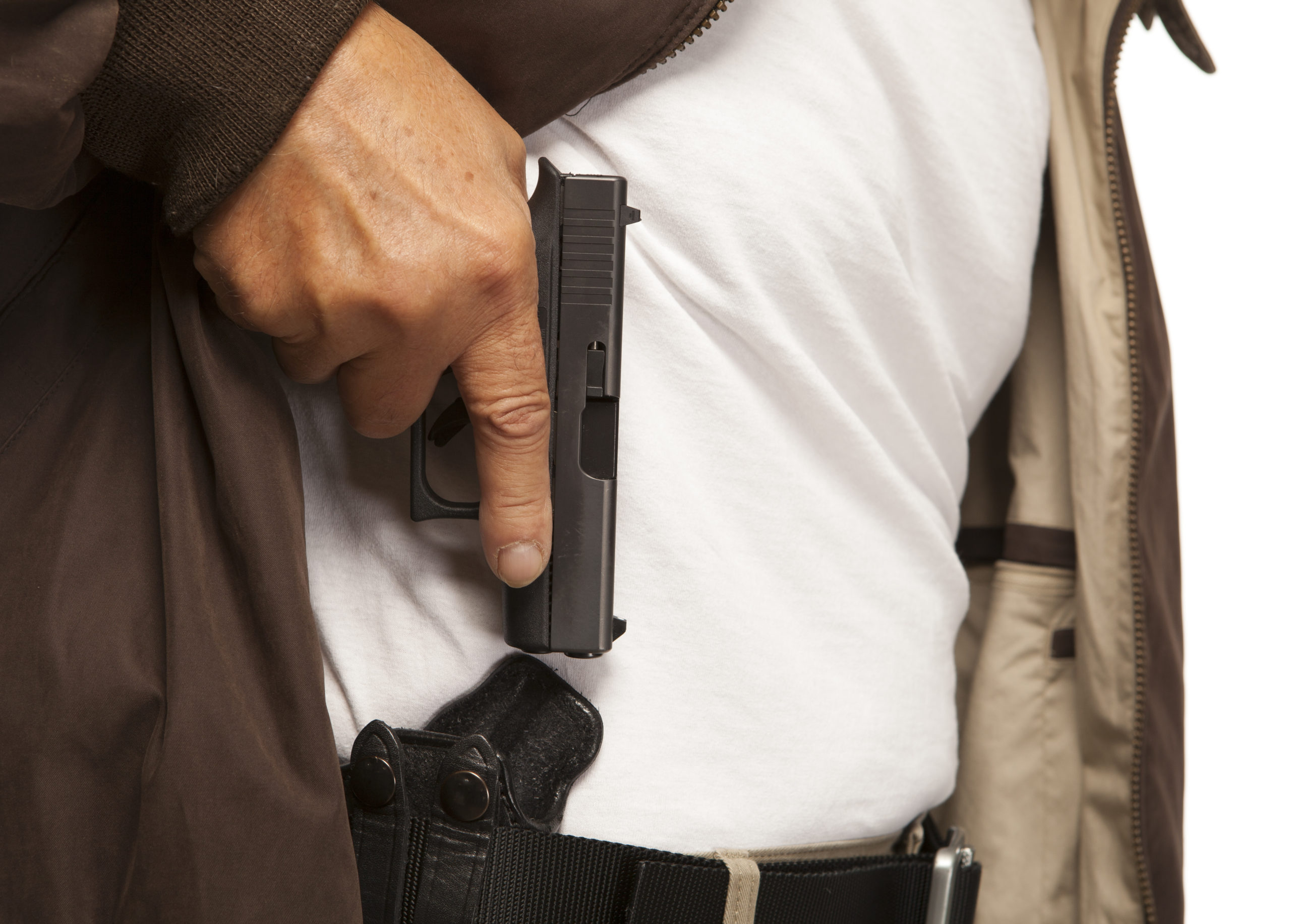 Similarly, Kansas specifically excludes threats of force from the definition of deadly force when the “actor’s purpose is limited to creating an apprehension that the actor will, if necessary, use deadly force in defense” of themself or another. This is a great legal protection because, as discussed above, deadly force is often not justified to defend against a property crime. In Kansas, a threat of force may be appropriate when dealing with damage to your vehicle by a vandal or looter.

As another example, in California, drawing or exhibiting a deadly weapon not in self-defense, under certain circumstances is a crime. So what does that mean? Whether loaded or unloaded, if a firearm is un-holstered or intentionally shown in a rude, angry, or threatening manner — other than in a self-defense situation — you could be arrested.

The same goes in Illinois (see here and here). If a person uses a firearm while putting another in fear of a battery — whether the firearm is “pointed” or just exhibited — the offense is classified as an aggravated assault.

Moral of the story: you must take the time to learn the laws of self-defense that are on the books in your state. It can be a complicated process, but every responsible gun owner needs to have a reliable source of information. Sort fact from fiction and be sure you’re informed enough to stay on the right side of the law.

Emily Taylor is a program attorney with US LawShield.