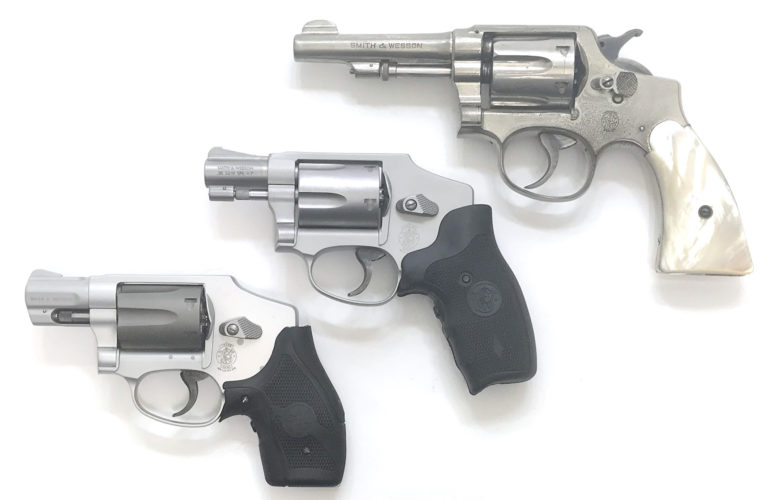 We all have our favorite guns, and I’m no different. Something about the design and cosmetics of certain arms speak to me, but I’m not exclusive to any single brand. In the safe right now are semi-auto handguns from Colt, FN, GLOCK, Ruger, and SIG Sauer, and rifles from Remington, Savage, Beretta, Daniel Defense, F-1, and Mossberg. Many of them are transients, sure, but, occasionally, something will stick.

Overwhelmingly, the ones that have stuck are Smith & Wesson wheelguns. S&W revolvers have solved specific problems for me, so I’ve tended to keep them and mess with them. Are they my favorites? I guess by definition of the word “favorite” they are, because each handgun is “one that is treated or regarded with special favor or liking,” as Merriam-Webster describes it.

Herewith, then, are my favorite Smith & Wesson revolvers, which have earned that distinction by time in service, enjoyment, utility, and history.

I bought this double-action-only revolver back in 1999 as my primary concealed carry gun, a role it has served in for 20 years now. I recognize many TTAGers wouldn’t think of carrying it because of its capacity and chambering, but it has worked for me because of its size and light weight. It is the polar opposite of a Dirty Harry magnum revolver.

There aren’t many M332s available for sale, but when they come online, they usually run about $375 and up.

The satin-finish hammerless DAO M332 weighs only 10.8 ounces empty and 12.8 ounces loaded with six rounds, so whether it hangs on a pants-pocket edge with a clip or in a pocket holster, it doesn’t sag my clothing. With the revolver measuring 6.5 inches in overall length and only 4.1 inches in height, I usually wear it in the front-right pants or shorts pocket in khakis or cargos, but it will also drop into a rear pocket and not print.

As a self-defense gun, it will also ride fairly comfortably in a Tru-Spec 24-7 Series Uniform Shirt, a tactical shirt with chest-zipper pockets. Also, I can secure it in Under Armour Team Coaches Shorts, which have a right-rear button pocket. I don’t like wearing the gun in the front of the sports shorts because it bangs into my leg.

When I bought it, the M332 had shortcomings that I knew had to be resolved. Unlike a similar M331 with hammer I tried briefly, there was no relief from the stock 10.8-pound double-action trigger pull on the M332. The M331’s single-action trigger pull was a really nice 3.5 pounds. I had a local gunsmith polish and respring the M332’s DA pull to break at 7.8 pounds. Haven’t had any ignition problems at that weight.

The Smith’s original laminated grips were nice looking, but they were too slippery. This resulted in poor control even when firing less-powerful .32 Long cartridges. It so happened that the minimal sights were just a groove machined into the titanium topstrap and a machined-in serrated front sight ramp, so the addition of Crimson Trace Lasergrips (LG-405 for J-Frame Round Butt Compact Grip) solved both problems.

There aren’t as many loads for the .32 H&R Magnum as for the .380 ACP or .38 Special, and they’re slightly more expensive. But my favorite carry load is Black Hill’s 85-grain JHP, which develops 1100 fps and 228 foot-pounds of energy at the muzzle and is easy to shoot in the AirLite. That compares favorably to the company’s .380 Automatic 90-grain JHP running at 950 fps, but the .32 has 4 to 5 inches more penetration in ballistic gelatin, Black Hills’ ballistic images show.

Buffalo Bore has a starchy 100-grain .32-magnum JHP that comes out at 1300 fps with 375 foot-pounds of muzzle energy. No, that’s not 357 Magnum or 44 Magnum territory, but I have not felt undergunned when carrying the Smith & Wesson M332 with that load. It’s just a bear to shoot in the light revolver.

Still, when Federal and Ruger collaborated on the .327 Federal Magnum launch in 2008, I looked hard at switching. The .327 Federal Magnum is basically a lengthened .32 H&R Magnum, which itself is a lengthened .32 S&W Long. Ultimately, I decided not to switch, and the .327 FM led to more bullets being made in .32 caliber, which has increased commercial availability of the .32 H&RM. For this, my M332 and I are truly grateful.

I bought this double-action revolver to replace my M332 a few years ago when it looked like .32 H&R Magnum was becoming obsolete, and I still carry it occasionally. The manual of arms is the same as the M332, though the trigger rework on the .38 Special is a little better at 7 pounds.

Smith & Wesson J-Frame revolvers have been around since 1950. The Model 642 is a variation of the Model 42 Centennial Airweight.

This is my second-favorite Smith, and like the M332, this one is no longer cataloged on the company website. It is still available NIB at retail, however, for around $575. Other similar models are more current, however, such as the M642CT No. 12555. It has the lock mechanism above the cylinder release and a CT Lasergrip in Robin’s Egg Blue. It lists for $700.

The M642LS is nearly mechanically the same as my M642-1 No. 105972, but without the Lasergrip and the lock. It’s also inscribed “Lady Smith” on the frame. I’ve shot previous LS models and liked them. (Yes, my pronouns are still he/him.) Perhaps the closest fit, however, is the Performance Center Pro Series Model 642 178041, listed for $499. It is a J-frame with no internal lock.

My Model 642 with Crimson Trace grips and no lock has a fully enclosed Centennial Hammer and double-action-only operation like my M332. The M642 holds one fewer round, five, than the M332. It likewise has the integral front sight serrated post and fixed rear sight groove augmented with the CT red laser in the grip, but this laser (LG-305) came on the gun.

The cylinder is stainless steel, which pops out of an aluminum-alloy frame. The stainless barrel length is 1.875 inches. It’s a heavier than the M332, though not by a lot, at least in gross weight. It weighs in dry at 14.8 ounces and 16.8 ounces loaded, which is only slightly heavier than the .32 Magnum. But on a percentage basis, that’s 40% more than the M332. So that’s why it’s my second-favorite.

This was my grandfather’s revolver when he was a peace officer in West Texas and has recently come to me as a collectible. It was also called the .32-20 Military & Police, which makes sense for him to have owned. Blued versions of these K-frame all-steel revolvers were more common than the nickel finishes for law enforcement, and .38 S&W Special was a more common chambering.

The .32-20 WCF cartridge was introduced by Winchester in 1882 for the Model 73 lever-action rifle, but also had considerable popularity as a medium-power cartridge in both rifle and revolver, according to Cartridges of the World 16th Edition. Rifle loads in .32-20 should not be fired in pistols because the long-gun ammo develops higher pressures than what the pistols were designed for. It has been called the first “magnum” cartridge ever developed, though without the formal “Magnum” appellation.

The 4th Change was “built on the square butt K-frame with five screws, a 4-, 5-, or 6-inch pinned barrel, blue or nickel finish, forged round blade front sight, with a flattened top strap with a square-notch-cut rear sight for service sights,” says the Standard Catalog of Smith & Wesson 4th Ed.

Mine has the 4-inch barrel and has been fitted with imitation pearl grips, and likely saw duty for home defense as well as being a favorite revolver. A bore scope shows the barrel has no micro pitting, and the rifling is well-defined and visible. There’s some finish pitting on the outside of the gun, so I’ll have to decide what to do about that. It’s in NRA-grade “good” finish overall, I’d think. Maybe “excellent” for antique firearms conditions.

I may also get it lettered by S&W, which costs $75 from the Smith & Wesson Historical Foundation.

The “Letter of Authenticity,” formerly called the “factory letter” when Smith & Wesson issued the letters, includes information on the model and gives information, when available, on when and where the gun was shipped and how it was outfitted. These files can go back to 1858, but the information generally just supplies the date shipped through 1880.

Will I ever shoot the Model 1905 Hand Ejector 4th Change? Time will tell. If so, it might move up the list at least a notch.

To see other TTAG entries on Smith & Wesson revolvers, click the links below: