In the increasingly litigious world we live in, simply being of good character and stating the whole truth often isn’t enough. Pictures can be taken out of context, witnesses can lie, and a good lawyer can spin situations to the point where you’re no longer in the right in the eyes of a jury. That’s where the Taser Axon Flex comes into the picture, providing officers (and others) the ability to capture an entire event, not just what happens in front of the cruiser’s dashboard camera . . .

The idea of a wearable camera isn’t exactly new. First person cameras have been around since they could make cameras small and light enough so they don’t break your neck. But they’re still typically too heavy to leave on your head continuously. What police officers wanted was something light and unobtrusive enough that they could put it on and forget about it, turning it on only when needed. Something like this: The video camera itself is tiny, as seen here in relation to the shooting glasses to which they’re attached. It’s also remarkably lightweight — when I was wearing it, I could barely feel it attached to the glasses. The way it does this is by leaving all of the battery and power components in a remote package that straps to your belt.

The downside is that you need a wire to run between the power pack and the video camera, which gets annoying. You can run the cable inside your shirt, which will keep it from getting caught on your equipment or ripped out by accident, but then you run into problems where you don’t have enough slack and the camera can get ripped off its mount. 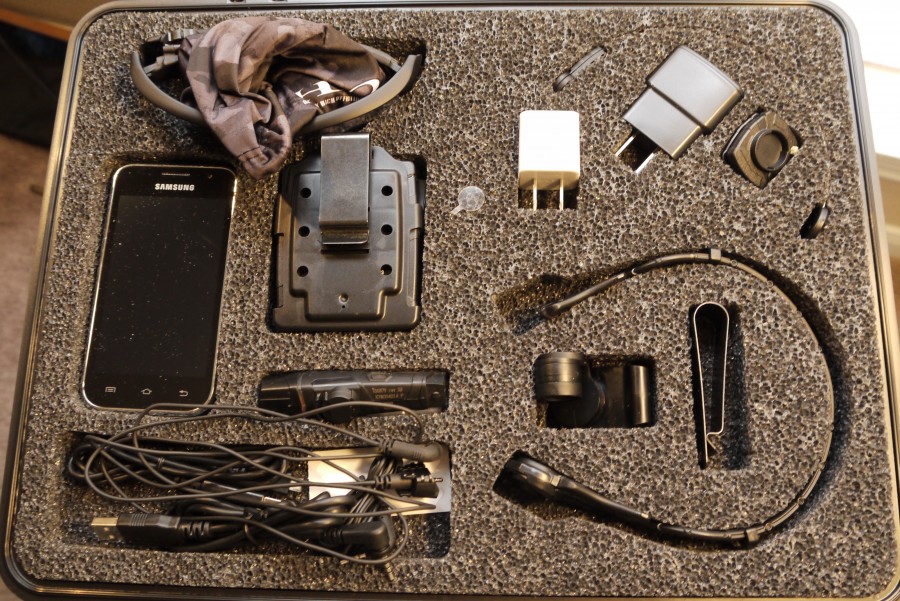 The Axon Flex system comes with everything you see here, which includes a headband mount, a collar mount, a shirt mount and a sunglasses mount. The camera has a small yet very powerful magnet embedded on its side, and that marries up with a similar strong magnet in each of the mounts. The mount is designed in such a way that it doesn’t move very much, if at all, once it’s locked in place. It’s a well-made, simple system that allows the camera to be quickly attached and fall away harmlessly if someone (like an attacker) tries to grab it.

While all of the mounts seem to be pretty useful, I found that the sunglasses mount works the best. There are fewer things to get in the way, and it’s always pointing in the right direction. If you were to go for only one mount, sunglasses mount is it.

At this point, I know what you’re thinking. There are tons of personal cameras out there already, why not with one of those? Something like a GoPro or a Contour? Well, two reasons. First is the weight, and second are the features.

Like I said, the camera weighs so little that you con’t really feel its presence. In contrast, a Contour or GoPro strapped to your noggin would be a noticeable increase in weight and you’d probably take it off at the first opportunity. Having something lightweight that “just works” is essential to ensuring that it’s actually used.

Second is that this was designed from the ground up to be a “police” camera. Normally, cameras only record once you hit the record button. With the Axon Flex, the camera is constantly buffering, and will record the 30 seconds BEFORE you hit the button as well as everything that happens afterwards. There’s no sound for the first 30 seconds, but all of the video is of the same quality. The video is also stored in a tamper evident file format that has all sorts of forensic goodies attached to it, and requires proprietary software to recover the video.

Speaking of the video quality, it’s acceptable. The first person video segments in this competition segment were recorded using the Axon Flex system, and while it’s good enough to figure out generally what’s going on, we aren’t talking about cinema quality footage here.

For police work, I can see a definite need for something like this. In a world where the jury expects to be spoon-fed all the evidence and to have fingerprint and DNA matches for simple possession charges, having irrefutable video evidence of illegal activities is a huge benefit to law enforcement. The constant 30 second buffer means you’ll never miss a second of the action, and the “officer proof” design of the on/off buttons and record feature means that anyone can be trained to use the camera.

For regular citizens, though, I don’t know if there’s really enough to recommend this over other camera systems. Assuming you get Taser to sell you one, that is. The video quality is low, the software is more complex than required and the wires are annoying as hell. My recommendation for consumers: get a Contour instead. Unless you find yourself — for some reason — regularly needing to record defensive gun use situations, in which case the Axon Flex would work well.

Utility * * * * *
For officers, there really isn’t anything better. Lightweight and with all the bells and whistles you could ever want.

Overall * * * * 1/2 (LEO) / * * * (Citizen)
I’m dropping a half a star for the annoying cable, but otherwise I don’t know why every police department in the country doesn’t have these already. For citizens, though, there are better and cheaper options for first person video recorders.