Stop me before I Fudd again! . . . One gun owner’s plea for Congress to do something

I own multiple shotguns, handguns and rifles, including an AR-15. Unfortunately, when the gun-control debate is reignited by another mass shooting, my voice is often unheard. Maybe my message is drowned out by the NRA’s continued silence. Perhaps I’m ignored because I don’t fall within a pre-defined box, allowing you to label me an outlier. Either way, in the wake of yet another mass shooting by a U.S. citizen, please do not allow my plea to fall on deaf ears. So I ask that you do the following:

Put me on a registration list or ban my AR-15. Force me to wait three days before I pick up the next gun I buy, or conduct a more thorough background check. Tell me I can’t own a 20-round clip for my AR-15. I don’t care what you do. But please do something. …

Sure, there may be debate about which laws appropriately strike the balance between individual liberties and the safety of civilians, but the time for discussion has long passed. It is time for you to enact laws that require mandatory waiting periods and universal background checks. If you need to ban all semi-automatic, high-capacity guns, then draft the bill. Steve Wynn is the billionaire CEO of Wynn Resorts. Steve Wynn and his wife Elaine Wynn are also a gun control advocates.

The Wynns have long banned guns from their casinos and resorts. Steven Wynn’s latest statements give us an insight into the minds of the gun grabbers.

Mr. Wynn believes that the attack that Stephen Paddock launched killing nearly 60 people would never have been able to happen at any of his properties. He thinks that the fact that his hotels and properties are gun-free zones would have stopped the massacre that occurred in Las Vegas.

Paul Nehlen, the America First conservative who is challenging House Speaker Paul Ryan in the 2018 primaries, has released a campaign video using his fingers to demonstrate how a bump stock is not necessary to simulate automatic gunfire — as fake news permeates the airwaves about the misunderstood accessory.

The video is in response to media reports making strange claims about the accessories in the wake of the Las Vegas shooting massacre, and the hysteria to ban them.

“What’s Congress gonna do? Outlaw fingers?” Nehlen asks after bump-firing his M214 without a bump stock. 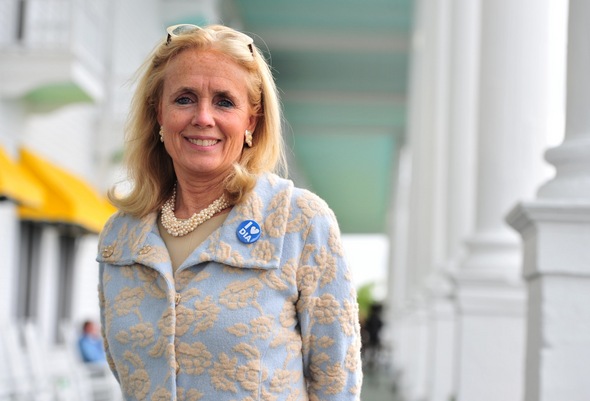 Wish we were as confident . . . Dingell On Gun Control: Bump Legislation Unlikely to Pass

A bipartisan bill banning the accessories was introduced in Congress yesterday. Does that mean we’ll have a law in the books anytime soon?

Congresswoman Debbie Dingell, a Democrat from Michigan who advocates for “common sense” gun control, doesn’t think so. “It’s very hard to get anything through,” she said at Fortune’s Most Powerful Women Summit in Washington, D.C. Wednesday morning. “We probably won’t even get the bump legislation even though the NRA says we should. People have a way with the legislative process of adding other things to the bump stock legislation, which will make it toxic and will get it killed in the senate.”

Data shows gun violence is disproportionately a male problem. Of the 91 mass shootings in which four or more victims died since 1982, only three were committed by women, according to a database from the liberal-leaning news outlet Mother Jones. Men also accounted for 86% of gun deaths in the United States, according to an analysis by the non-partisan non-profit Kaiser Family Foundation.

Men are more likely to own a gun — three times more, according to a 2017 survey from the Pew Research Center. This, despite marketing from gun manufacturers and groups such as the National Rifle Association to lure women. So why the discrepancy? Why are men so drawn to guns and so much more likely to live and die — and kill — by them? Rifles carried by Spokane police on patrol will soon be equipped with suppressors, a move the department says will protect officers and civilians from hearing damage.

“It’s nothing more than like the muffler you put on your car,” said Lt. Rob Boothe, the range master and lead firearms instructor for the department.

Outfitting the department’s 181 service rifles with suppressors will protect the city from the legal costs of worker’s compensation claims filed by officers, as well as from potential lawsuits filed by bystanders whose ears are exposed to firearm blasts. The sound of a fired shot can be louder than the takeoff of jet engines, the department says. Please, don’t confuse them with facts . . . The simple truth is that guns help, not hurt, millions of Americans

Anyone seriously concerned about violence knows that none of the usual panaceas would do much to reduce gun deaths. Gun restrictions in countries such as Australia and Great Britain didn’t end gun-related crimes.

“Assault weapons” is a fake category, cooked up for political purposes. Most guns are “semi-automatics.” Silencers do not enable James Bond wannabes to silently kill; they only modestly reduce the noise.

Purchase limits won’t stop a criminal from planning ahead. Any competent person can quickly swap out gun magazines. Gun shows account for only a small percentage of sales, and dealers still must follow the usual rules. Machine guns are extremely hard to obtain, and the legally owned ones have been used in a crime only three times since 1934. There was never any doubt . . . Mass. House Approves Ban On Bump Stocks

The Massachusetts House approved a bill Wednesday that would outlaw devices that allow semi-automatic weapons to mimic fully automatic guns.

The House voted 151-3 in favor of legislation to ban so-called bump stocks, such as those used by the Las Vegas shooter.

Republican Gov. Charlie Baker has said he supports a ban.