Yesterday TTAG published an article talking about Houston Police Chief Art Acevedo attacking Republicans (and the NRA) after a HPD officer was shot and killed during a domestic violence call, often the the most dangerous calls police officers deal with. The attack would have been shocking…if it had come from someone else. But Acevedo’s made a career of injecting politics into his job.

Houston’s police union, in a letter to its members, expressed their disgust at Acevedo’s politicization of the shooting.

By now you have heard Chief Art Acevedo engage in a 5-minute rant on gun control outside the funeral home where fallen Sgt Chris Brewster was taken. The fact that Chief Acevedo chose that moment to make a political statement on guns, is nothing short of offensive and inappropriate. There is a time and place for every discussion and this was neither the time nor the place.

But this isn’t about the political attack. This is about Chief Acevedo’s connection to Michael Bloomberg’s anti-gun political machine. Sometimes, a picture is worth a thousand words.

It’s no coincidence that Shannon Watts endorses him, as Chief Acevedo was one of the first members of the Everytown Advisory Board back when he was chief of the Austin Police Department.

Don’t forget this as well (when he was in Austin). Also note that the current mayor of Houston is part of Bloomberg’s Everytown via Mayors Against Illegal Guns (from February of 2019).

Mayor Turner is a member of Mayors Against Illegal Guns, a coalition of mayors across the country advocating for life-saving gun safety reforms and part of Everytown for Gun Safety.

Further, Everytown is also listed as a Trump resistance organization, so it’s no wonder that the Chief used the tragic death of one of his officers over the weekend as the basis for a partisan attack on his political opponents. 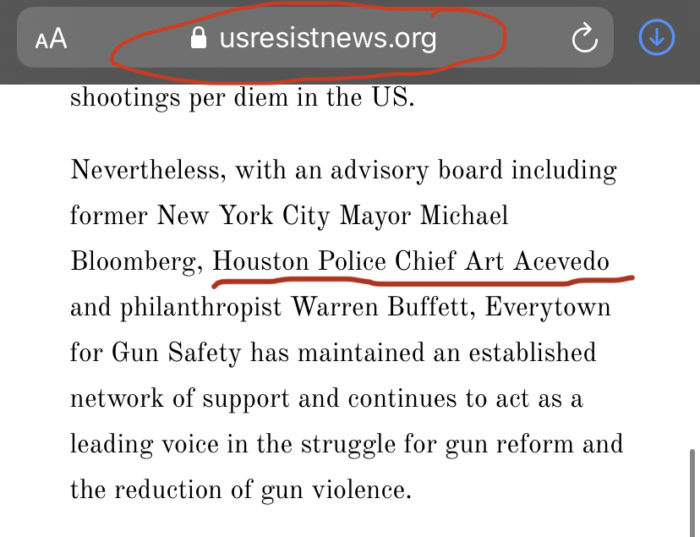 Also, it goes without saying that the Chief has no problem testifying before Congress to push the Everytown agenda. Why is “Marjory Stoneman Douglas High School” highlighted as well? Remember March For Our Lives (think David Hogg and friends)? Well, Chief Acevedo is with them as well.

March For Our Lives was hijacked almost immediately after it formed after the 2/14/18 shooting and used by Democrat operatives in order to push gun control as a wedge issue in the the 2018 midterm elections.

In fact, the group staged an entire summer tour for that purpose (which in reality was just to elect more anti-gun Democrats). Take a look at those links and see how dirty March For Our Lives and their allies are. It’s fitting that a political hack like Chief Acevedo would be allied with them. Heck, he even loves getting into immature twitter battles with the NRA!

When you use the death of one of your own officers in order to blame your political opponents in Washington D.C. rather than the recidivist scumbag who pulled the trigger, you’ve already lost the argument and any remaining credibility.

Shame on you, Chief Acevedo, for using the fallen officer’s death to push your (and Michael Bloomberg’s) partisan political agenda.

One question though, Chief: what’s your (or Everytown’s) statement on your department lying in order to get a bogus warrant to raid the house of a couple and shoot them dead? Are you still trying to find fault with Republicans or the NRA on that?

One final note. In the same link at the beginning of the article (this one), the Everytown For Gun Safety Support Fund is mentioned:

Today, Everytown’s charitable affiliate, the Everytown for Gun Safety Support Fund, released the first video in a series called “Scenes from Everytown: Stop the Violence.” The first video illustrating the dangers of child gun access can be viewed here.

That fund is listed as a 501(c)3, in which the IRS lists as not being allowed to conduct any major lobbying activity. Seems they like find a way to do it anyway, though . . .