A Model 700 so cheap that Remington barely acknowledges its existence. You can’t find these ADL’s in any Remington catalogue or website listing. Nope, these cheaper-than-cheap guns are available in limited areas and only in limited stores – mainly “big box” retailers like Wal-Mart, Dick’s, Sportsman’s Warehouse, and a few others.

Recently I’ve been making friends at the local range and I finally found someone to take me coyote hunting out here in the desert (yay!). When going through my inventory, I realized that there was a gun “hole” – a gap in my firearm selection if you will. Everything small was either too small, (such as the Savage 93R17 .17HMR I reviewed in November) or, if the caliber was right, it was too heavy (namely all my AR’s) for this type of hunting (stalking, sitting, calling, stalking, sitting, calling, etc).

I love buying used guns and have literally bought dozens of them over the past few years. With the exception of the S&W 629 Mountain Gun that wouldn’t shoot worth a damn, I have had nothing but the best of luck with them and at a significant price savings. I tried my hardest to find a used .223 or .243 – every gun and pawn shop within 50 miles has been thoroughly searched each week for the last two months. So I got frustrated to the point of looking into a new gun and quickly spotted a potential candidate.

At my local Wal-Mart, there was a Remington .243 ADL for a whopping $399.97. I didn’t even realize they still made the ADL but apparently in an attempt to sell rifles at Savage-like price points, Remington still offers the ADL to a few big-box retailers. For the record, both ADL and an equivalent Savage .243 were the exact same price. I went with Remington because I have an extra BDL trigger guard for a short-action and an adjustable OEM trigger hanging around if I should so desire.

After looking around, at less than four bills, the ADL is actually a pretty good deal – after all, you’re getting the same M700 action that all other 700’s get, the X-Mark Pro trigger, and a 3-9x scope. Since the SPS is nothing more than an ADL with a hinged floorplate, I couldn’t justify spending $200 more (or more, considering you are getting a 3-9x scope) for the trigger guard that I already had.

Out of the box…

The barrel has a 1-9.125″ twist rate which should be sufficient enough to send 100 grain projectiles down range sufficiently stabilized. Since I’ll be using this for coyotes and coyote food (i.e. ground squirrels for bait), I’ll be working up some handloads in the 50-85 grain range. For those of you who live in whitetail country, the .243 with 100-grain Core-Lokt rounds have proven to be quite effective for many hunters. Since I also will be putting in for a javelina tag, I picked up a couple of boxes of the previously mentioned 100-grain Core-Lokts for testing purposes. 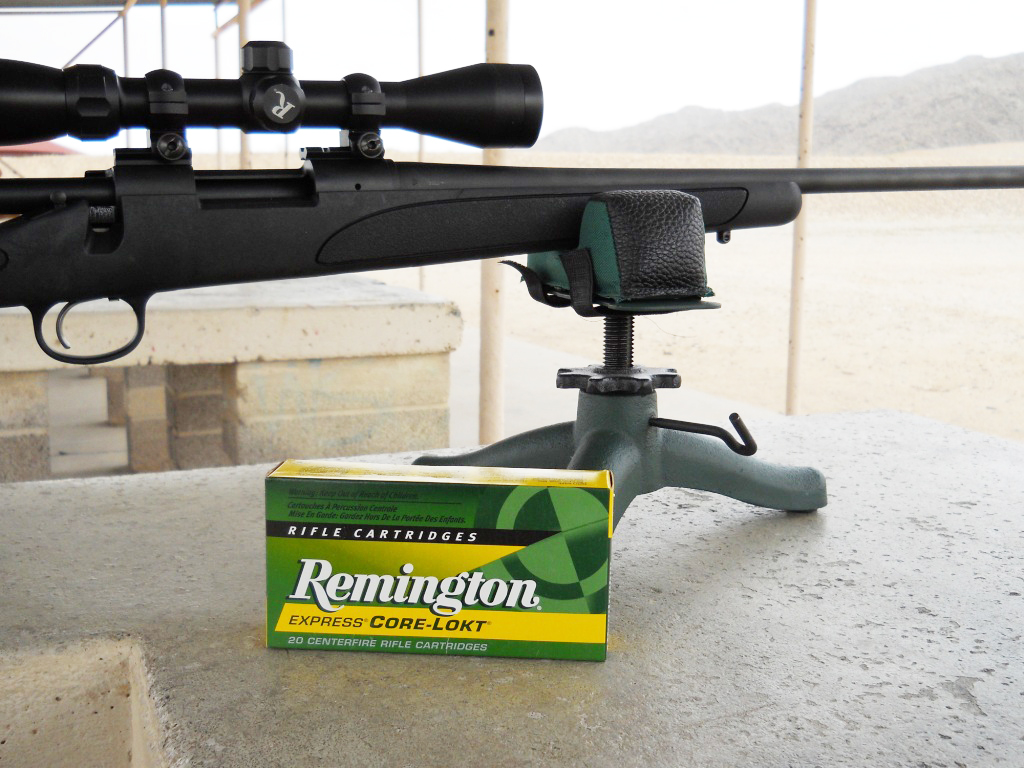 The scope comes mounted and bore-sighted and from what I can tell, is nothing more than a Tasco World Class 3-9×40 available elsewhere for $50-60 – except that this scope has a Remington “R” on each of the turret caps. Like previous ADL models, there is no floorplate, simply an internal box magazine that holds 4+1 in the short-action calibers. The trigger is an X-Mark Pro trigger but is adjusted from the factory and has no provision for any external adjustments. Surprisingly enough, the trigger breaks cleanly at 5 pounds and has no perceptible slack or creep. Certainly not a target trigger, but it works well enough for coyote hunting.

Unfortunately, the wind was gusty on the only day I could give the gun a test – 10 mph was the normal wind speed and gusts up to 25 mph weren’t uncommon. I figure if I could shoot between gusts and swells, I could at least test the action and check pressure tolerances of my handloads.

Apparently when Remington says that the scope is bore-sighted they mean that the scope is pointed in the general direction that the muzzle is. As it turned out, the first couple of rounds downrange couldn’t even hit paper on a 2’x3’ board. After pulling the bolt out and bore-sighting by eye, I found paper and was only a little off. After a couple of clicks here and there, I was centered and ready to begin testing for real. 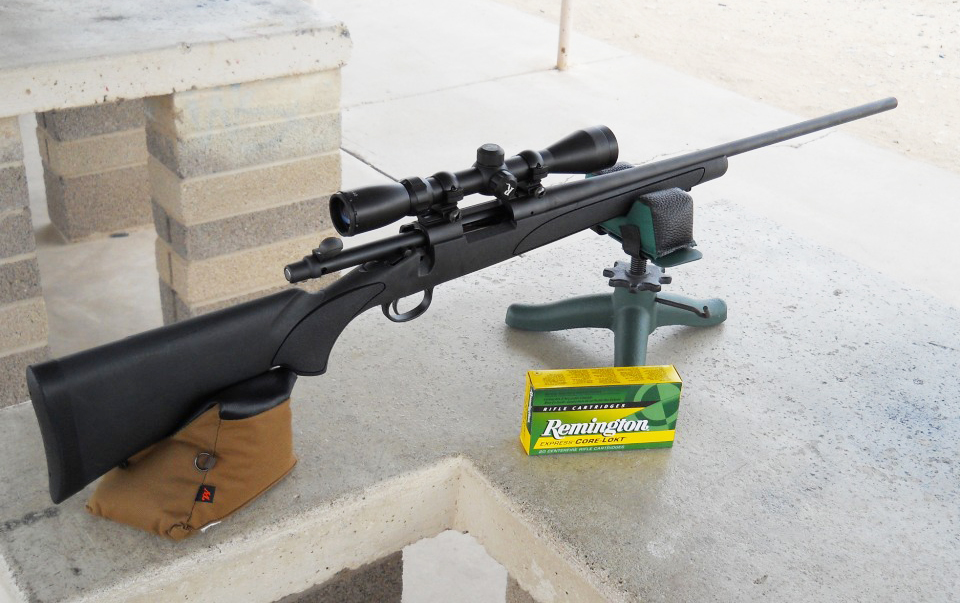 Since getting my Beta Chrony from Brownells a few months ago, I seem to be using it all the time, even when testing factory ammunition. I started with the 100-grain Remington Core-Lokt PSP rounds and as expected, they shot fine and showed moderate accuracy. Trying my best to deal with the wind, I was able to keep a 10-shot group under 2-1/2”. Not great, but not bad for the conditions. The Core-Lokts clocked in at an average speed of 2942 f.p.s. (10’ from the muzzle) with an SD of 15 and an ES of 51. I did some handload testing to see how the ADL held up to high pressures and was happy to find that I could get the velocity that I wanted without any signs of pressure. I tested the 75 and 87-grain versions of the Hornady VMAX rounds loaded in fully-prepped R-P brass. Velocity measurements were as follows: For my handloads, I was using 2x and 3x used brass that I picked up alongside a set of dies off of Backpage.com. I have some more load development to do – mainly I want to try a few lighter bullets and some new brass, but was overall happy with my results. The 75-grain bullets will certainly be enough for coyote, so I at least have a “go to round” in the mean time.

Anyone who has tried to squeeze accuracy out of an SPS stock with a bipod knows that they’re better used as a boat paddle. The ADL stock is no different and it’s on top of my list of things to upgrade. The Remington-badged Tasco scope is a close second. It works, but suffers from only having around 2” of eye-relief, blurred edges, and a very stiff magnification knob.

However, despite the pitiful stock and a scope that leaves much to be desired, the Remington ADL still represents a great value for the money. Remington 700s are easily modified and tuned into any “gun” you want. For me, this gun will be dragged through scrub desert, leaned against Golden Barrel cacti, and likely bungee-strapped to an ATV mounted gun-rack.

For those who may be just getting into hunting or are trying to find a “back up” gun for the occasional friend or relative that comes to shoot/hunt with you, the ADL is a great choice. At my local store, they are available in .223, .243, and 30-06 – three calibers that should cover almost every game animal in North America.

Remember – all of these ratings are both subjective and relative to the class of firearms they are in. A 5-star “budget” rifle is not on the same playing field as a 5-star custom 1911.

Style * * *
I wouldn’t call it “stylish”, but it certainly looks better than a “Sporterized” Mosin-Nagant in an ATI stock.

Ergonomics * * *
Like most stocks, I have a problem with my cheek-weld – most end up being “chin welds.” I need to pay attention to solid and repeatable placement, which is why I prefer adjustable comb stocks on my target guns. Overall, the ADL handles just like any SPS so use that as a reference.

Reliability * * * *
Two boxes of factory ammo and 50 handloads that approached maximum loads with no problems to speak of. The barrel cleaned easily but required some Hoppe’s 9 to get all the copper out. A few good soaks and it was as clean as new. I’ll add the 5th star after taking it through the desert a few times. Maybe.

Customizable * * * * *
Well, it’s still a Remington 700 so the sky’s the limit when it comes to customizing. I’ll be adding a B&C Alaskan II stock and a nicer scope ASAP. The advantage of the ADL is that you’re not paying for any “extras” that you don’t need.

Overall Rating * * * *
A great backup or entry-level “starter” gun. I’d give it a 5th star if it had a better scope, but  considering that the ADL package is almost $200 less than a stock SPS (which doesn’t include scope or bases), it is worthy of at least 4 stars.