I really appreciate this recent post. It has answered a bunch of questions for me. If I may, I have one question left that I am sure you can help with. […] I am confused about how to setup the top rail with respect to BUIS and an optic system. Just to be clear, I have no idea what I really want as far as optics but I know I do want to be able to use both the optics and iron sights.

In your example, you have the fixed front sight (which I agree with, it does look proper and I don’t think it will interfere with the holo if both eyes are open). But how would you ever use the rear sight if you had to? Is it supposed to be setup so you can peer through the red dot and use the rear and front iron sights? Or, do you have to rip off the red dot to utilize the BUIS’s?

What you’re looking for are called “co-witnessed” sights, and they’re very easy to set up. Let me walk you through it…

Holographic or red dot sights are fantastic for quickly putting rounds on target. They’re nearly idiot proof aiming devices that work great especially in competition or LEO/Mil applications, or even just for shooting stuff at the range. The problem is that red dots have the ability to fail, and they usually do at the most inconvenient moments. Like, the middle of a firefight.

The solution is to mount a set of iron sights on your gun in addition to the red dot. Iron sights don’t run out of batteries and are a lot harder to damage, so chances are if the gun is still functional the iron sights will work. Especially with the more modern “flip-up” style iron sights, it’s very easy to mount a set of these puppies, zero them and then ignore them until you need them.

The most popular method of mounting and zeroing iron sights is by “co-witnessing” them with the red dot. The first thing you need to do is make sure that you will be able to see your sights through the optic. With standard A4 upper receivers the front sight on the gas block and a standard rear sight (such as the Magpul MBUIS) mounted on the flattop rail will line up precisely through the middle of most optics such as an EOTech (shown here) or Aimpoint with a standard height riser. Even if you have a full length rail and no front sight on your gas block, the standard flip-up sights you can buy will typically work with the standard height optics.

Usually this will just work, as the manufacturers design their optics with this trick in mind, but if the sights or the optic is too low you may need a riser. A riser is a small platform that attaches to your rail and raises the device slightly. They come in different heights, so make sure to get the one that will lift things up just enough to get it all lined up.

Where you start to get into trouble is when you add a scope onto the gun, as the magnification combined with the lower height on the gun makes co-witnessing almost impossible. For that reason I use offset iron sights on my scoped AR-15 rifle instead.

Once you have your irons on your gun and they’re properly in line with the optic the next step is to zero the iron sights. I always like to zero the irons first as I use them as my reference point when mounting optics, so knowing that they’re precisely on target is essential. Make sure you put a good number of rounds downrange to confirm the zero. 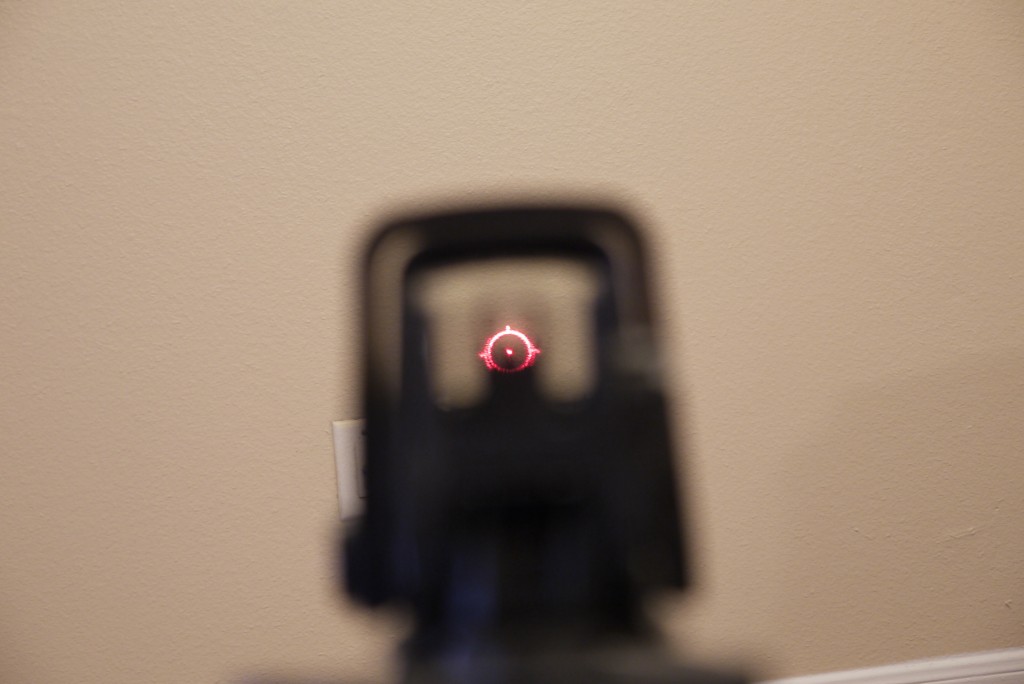 Congratulations! You now have a red dot with co-witnessed iron sights!

At this point, I usually fold away the sights and never touch them unless I’m swapping optics. This allows the red dot to operate without any of the iron sights getting in the way, but they’re still attached and able to be quickly flipped back up if needed. But there are moments when the irons can be handy.

For example, if you need to make a precise shot on a target you may want to consider flipping open that rear sight. As good as your red dot is, there’s still a chance for some parallax to screw up your shot. By using the rear sight you can make sure your head is properly aligned and squeeze out just a hair more accuracy from your dot, as you’re now using an extra reference point to aim your gun. It may be purely psychological, but I find that it works for me (see the above video).

And that’s the benefit of co-witnessed sights and how to set them up on your gun.