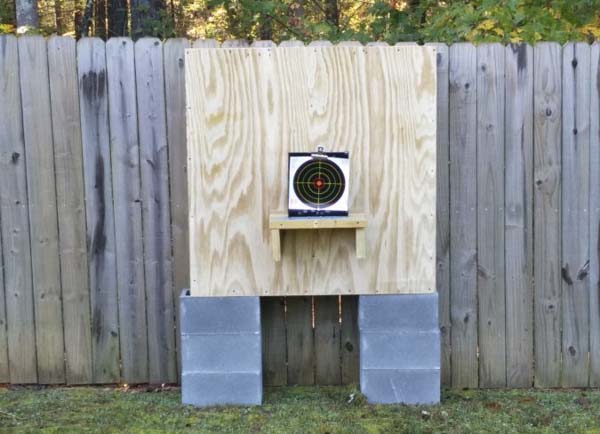 I live in a part of Cobb County, Georgia that is unusual in that it lies in between three towns, yet none of them have tried to annex this area. (Yet.) And while developers have built subdivisions all up and down the road I live on, I am fortunate to live next to 11 acres of woods owned by a very sweet widow who refuses to sell to anyone. This means I have no city firearm ordinances to deal with, and when I discovered the county ordinance concerning weapons discharge didn’t prohibit me from firing a weapon on my own property I decided to enlist my brother’s assistance and build me a back yard shootin’ gallery.

Where to place it was the easy part. The Eleven Acre Wood forms the southern boundary of my property and my neighbor’s house is on the other side of the woods. She has no problem with me firing toward the woods but I really wanted to be sure that the majority of whatever I fired stayed on my side of the property line. So we constructed a backstop that could easily stop a stray .22 round if I missed my target. The secret to the “bullet proofing” is rubber mulch, the same stuff used on playgrounds to make sure sweetums doesn’t get a boo-boo when he falls off the swing. It’s nothing more than shredded tires dyed some neutral color. Before we put the top on it, we put it into place on the concrete blocks, popped a few screws through to the fence post behind it for good measure, and filled it with as much rubber mulch as we could cram into it, packing it down as much as possible. Then we screwed the top down, further compressing the mulch. We figured that with the weight of the wood and the mulch it clocks in at around 350 pounds.

I use a steel bullet trap that’s rated for .22LR on the shelf to hold my targets. So far I’ve only missed the target twice, and while it made a nice round entrance hole on the front side, there’s no indication on the backside that any fragment of a bullet made its way though the foot of rubber mulch. I’ve been tempted to fire a 9mm at it to see if it would stop that, but I really don’t want to risk putting a hole that size in my fence in case it doesn’t.

Before I used it the first time, I notified the neighbors next to and behind me that I would be firing a pistol in my back yard and not to be alarmed. None of them cared so I loaded up my Ruger Mark III and opened fire.

There’s a housing development directly across the road from my house and for whatever reason they put the swimming pool in the front, next to the road. In the summertime, particularly on weekends, it gets really noisy. I didn’t pay that much attention to the yelling and splashing and other sounds coming from over there when I started firing. But after I emptied the first magazine I noticed it was eerily quiet.

Then I had to laugh. I had a picture in my mind’s eye of a bunch of kids and their parents huddled under the tables around the pool or crowded into the poolhouse with someone on a cell phone frantically dialing 911 to report “shots fired.” I waited several minutes to see if the law had been alerted, but no one showed up to confiscate my weapon or march me off to jail. So I reloaded and popped off a few more rounds. The noise across the street slowly began to build back up as they finally figured out no one was shooting at them.