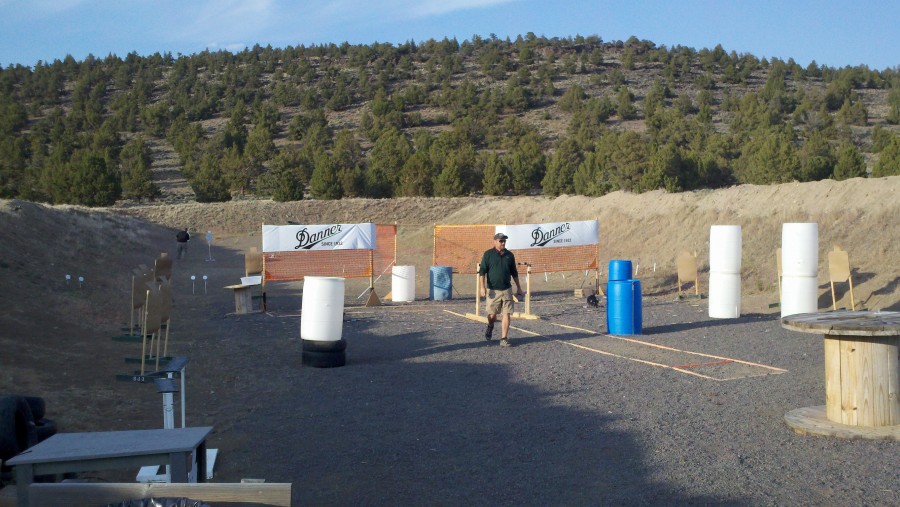 There’s a saying that no plan survives initial contact. 3-gun is known for being a sport where the way you planned it and the way you run it are completely different, but when you throw in the element of darkness things can get a little insane…

Let’s start with what worked. The flashlight strapped to the shotgun with duct tape worked flawlessly, and my lighting solution for the rifle could not have been more ideal. The handgun could have used a touch more illumination, but the light from my hat was more than enough to see what I was doing for the most part.

What failed miserably was the camera equipment. Save for the guys with night vision enabled cameras, no one was getting a good idea of how the action was rolling. Of the four stages I shot, only two were somewhat visible, and even then it turns out that my GoPro wasn’t properly configured. Tonight should be better, as I know what to expect and can rig my equipment better, but its still annoying that I didn’t get the footage I wanted.

So let’s talk about the stages.

Stage 3 was first for me. You needed to pop a pepper popper 50 yards away to open a gate, and then take out eight paper targets before moving downrange. My Surefire Fury lit up the night better than expected and I could see EVERYTHING, but when I ditched my rifle it went too. The second part was grabbing a shotgun and taking out some clay pigeons, which was easy enough. But then we got to the hardest part: the handgun.

The first few targets were easy enough. SOme small steel and paper targets more or less at contact distance. But then they threw in a twist: four rounds on some steel targets about 25 yards away. Since my handgun didn’t have a light on it I was stuck with my headlamp, and while that did a fine job of lighting up the target it didn’t help much telling me where my shots landed. I eventually decided that it was better to take the failure to neutralize than to waste another 30 seconds trying to hit the thing, and based on how some of the pros fumbled at that point I think I made the right decision.

Stage 4 began with a stage gun — an M&P with lights and lasers provided by Crimson Trace. Pop 4 bonus targets, then ground the handgun and grab our shotgun before running into the house. Eight clay pigeons, 4 on either side tucked away into the corners, and then dump the shotgun in a barrel. Finally, draw your handgun and engage eight paper targets.

This stage was tons of fun and shows off just how well my shotgun lighting solution was working. I ran the thing clean, and except for the one clay pigeon that failed to break (and threw off my count) life was good. I probably could have run that handgun a little faster, but I didn’t want to push my luck.

Stage 5 was AWESOME. You started in the doorway of a shoot house with night vision goggles and a PWS full auto AR-15 with IR designator. On the start signal you enter the house and shoot 15 targets from various positions, all in complete darkness (hence the issue with video). Bud despite the blackout the NODs made it look as if it were bright as daylight.

As I came to the end of the stage I had done one reload and had a mostly full magazine, but no targets remaining. I had forgotten to crank the thing over to AUTO for the last one like I planned, and it was all over. Until the RO leaned over and said “I’ve stopped the timer — go ahead and dump it into the dirt.” I then happily proceeded to chug through 20 rounds of ammo on full auto, watching it through night vision goggles. It was an amazing moment. Stage 6 was a more “classic” 3-gun stage. Engage 4 steel plates at 100 yards with the stage gun — the Colt Competition AR-10 we had seen a few days before and about which I am preparing an article — and then take out some clay pigeons and a couple plate racks while running between two different shooting bays. The toughest part was maintaining your balance while running, as you couldn’t see the ground and the gravel made it difficult to speed around the corners. I had an issue with that, almost tripping and faceplanting into the gravel once but I recovered and finished out the stage.

As we finished the stage, a lightning storm was rolling in. We were done for the day, and we were all absolutely exhausted. Crimson Trace had kept us up since 7 AM that morning, and we were all feeling the effects. But we were happy that they didn’t expect us today until 6 PM — until a work crew started hammering stuff in the room upstairs at 10 in the goddamn morning and woke me up.

I’ll do a longer article about what works and what doesn’t for night shooting in a bit, but I wanted to mention some things I learned. First, EVERY gun needs a light. EVERY SINGLE ONE. If I had a Streamlight on my P226 I could have made those shots on stage 3. Another thing I learned is that Crimson Trace’s laser grips are the absolute bee’s knees when it comes to night shooting. Properly zeroed, those puppies make it easier to hit plates in the night than my own crappy shooting in the broad daylight. And finally, I love the way I have my .300 BLK AR-15 set up. It is perfection itself.

Well, now I’m off to scrounge up some food. Which might be difficult, since apparently this hotel is outside the delivery radius for just about everything. Might have to hop a cab into town for supplies before I starve…