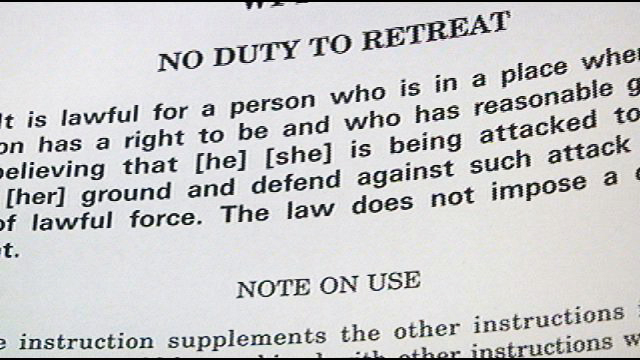 [The following article is reprinted with the permission of the author, Paul Valone.]

Amid rhetoric about “legalized vigilantism,” national media rush to indict both George Zimmerman and Florida’s “Stand Your Ground” (SYG) law. But even as editorialists call for curtailing such laws, Zimmerman’s own lawyer admits SYG probably doesn’t apply.1 In 2007, I wrote North Carolina’s first “Castle Doctrine” bill (our version of SYG), shepherding it though countless iterations of eight different bills.2 Far from “sloppily written,”3 as one editorial alleged, our law, effective December 1st, was vetted by legislators, legislative counsel and legal experts . . .

Castle Doctrine comprises three parts: The first establishes legal presumption that if somebody “unlawfully and forcefully” enters your home, workplace or vehicle, you have a “reasonable fear of imminent death or serious bodily harm” and may use up to deadly force in self-defense. You may not, as some suggest, shoot door-to-door salesmen; invasive entries must be both unlawful and forceful.4

Second, anywhere you may lawfully be, if you face “reasonable fear of imminent death or serious bodily harm,” you have no duty to retreat before using deadly force.5 Media misstatements notwithstanding, this provision, like Florida’s, does not change centuries-old standards for deadly force. It merely reinforces existing doctrine that you need not risk attempting escape before responding.6 Despite editorialists’ claims, saying “I was afraid” isn’t enough: In jurisprudence, objective “reasonable person” standards are well established.7

Finally, it grants immunity from litigation and malicious prosecution (think “Mike Nifong”) for people who justifiably use deadly force.8 Lest that seem unimportant, consider 64-year-old Joshua Moore of Rocky Mount, who defended his wife when their produce stand was robbed, then got prosecuted for murder. Moore spent thousands on appeals before winning acquittal in the NC Supreme Court.9

Like ours, Florida’s “aggressor” clause generally precludes the SYG defense if you provoke attack. If Zimmerman followed and attacked Trayvon Martin, he cannot claim the defense unless he withdrew from the situation or was counter-attacked so viciously he couldn’t retreat and faced a deadly threat.10,11

We crafted Castle Doctrine to prevent abuse. In 2009, I wrote language ensuring deadly force couldn’t be used against invaders fleeing dwellings. Other measures preclude the defense for anyone using deadly force against police, bail bondsmen, or legal inhabitants of a dwelling; by anyone not where they may lawfully be (e.g. burglary); or by those committing felonies.12 Even the “reasonable fear” presumption during home invasion is rebuttable.13

Zimmerman’s grand jury will convene on April 10. If he attacked Martin, he’ll stand trial and SYG likely won’t apply. But if Zimmerman withdrew toward his SUV before being punched and having his head repeatedly slammed into the sidewalk, as witnesses largely corroborate,14, 15 the law worked as intended.

As media feed on Zimmerman, consider cases they haven’t mentioned: Just four weeks into our law, two men broke down the door of a Vance County home containing a 14-year-old boy and his 17-year-old sister. As she called 911, he shot an advancing assailant16. Should that boy waste precious seconds pondering whether his attacker poses a deadly threat? Far from being “flawed,” as some claim, Castle Doctrine saves lives.

_
© 2012 F. Paul Valone. All rights reserved. No part of this publication may be reproduced or transmitted in any form or by any means electronic or mechanical, including photocopying, recording, scanning, digitizing, or any information storage and referral system, without written permission from the publisher. For reprint permission, contact: [email protected]