The “thirty-eight-special,” was a simple lengthening of the .38 Long Colt round that had proved so inadequate against the Moro warriors of the Philippines during the Spanish-American War. Developed in 1898, it was first chambered in the original “Military and Police” K-frame revolvers of S&W, the most produced revolver line in history. The earliest cartridges were charged with black powder, but the recent developments of smokeless propellant were the preferred choice to power their bullets just a year later.

The “.38,” was in itself a misnomer, in that it fires .357” bullets. Leave it to Colt’s nomenclature methodology to measure the case diameter rather than the British method of bore diameter. By the time the round was introduced, it was done as a matter of marketing convenience and continuity. The original loading was a 158-grain soft-lead, round-nosed bullet travelling at about 800 ft/sec. Truth be told, this was little better than the 725 ft/sec of the .38 Long Colt, but there you are.

However, the greater case volume and mostly the K-frame revolver’s design and size made it an immediate favorite of both law enforcement and military in the U.S.

The round dominated LE for nearly 70 years, until the advent of more efficient yet equally reliable semiautomatic pistols in the mid-1980s.
Colt continued to produce their “D-frame” revolvers such as the Police Positive and “I-frame” Officer’s Model for the now ubiquitous cartridge into the 1950s, but it had largely been supplanted by the S&W offering.

The .38 Special is well known for its accuracy, relatively mild recoil, and the variety of loadings available for it. From a 146gr squared-cylindrical “wadcutter” bullet at 600fps, the original 158gr “Police” round nosed lead, later offered in a “high-speed version” by the 1930s clocking roughly 850ft/sec, it has become and will probably remain the single best selling and widely used revolver round in the world.

Starting in the 1930s, some handloading folks decided they needed to soup up the .38’s speed yet further. These higher-pressure loadings were then used in the Smith & Wesson “N-frame” revolvers, and named the “.38/44 Outdoorsman.” This is the forerunner of today’s +P and +P+ loadings, but the cartridge then was more for sporting purposes, small game hunting and the like, versus the social work use the current high pressure rounds are used for today. These developments headed by Daniel B. Wesson, with some assistance from Elmer Keith (above), the late and great gunwriter, eventually produced the equally famous .357 S&W Magnum cartridge, which is another story.

Today, shooters who buy .38s are typically going to be buying a 2” to 4” barreled revolver for home or personal protection use. While the round is not the “one plus ultra” for such use, neither is it exactly a slouch. All the big American ammunition manufacturers, CCI/Speer, Federal, Remington, and Winchester, along with later companies such as Cor-Bon, Glaser, and SIG-Sauer have created computer-designed bullets that greatly increase the .38s ability to stop a threat through controlled expansion and adequate penetration.

The best .38 Special ammunition typically are any of the premium jacketed hollow points from 110gr to 158gr, though many shootists still carry the old “FBI” round, namely the 158gr soft-lead semi-wadcutter hollow point in +P trim, available from Federal and Winchester, the two main suppliers of ammo to LE agencies. One of the beauties of a .38 revolver is the ammunition suite. One has the option to reliably fire greatly varying bullet weights and pressure loadings in the same revolver, from the target wadcutter to the so-called “Treasury Load,” which was a Winchester 110gr +P+ jacketed hollow point round. At close range, a fixed sight revolver such as the S&W Model 10 or Model 36 3” would work fine, but as distances grow, an adjustable sight will aid the serious marksman to target the point of impact accordingly.

While the revolver itself is a reliable platform, it is also typically rather bulky for its power, has a limited ammo capacity, its bore axis is higher than most semi-automatics which causes more felt recoil comparing like pressure/speed loadings, and they are more expensive to build for their manufacturers. They can be much slower to reload too, without much practice or without “speedloaders” that carry a full ammo load released simultaneously by pressing them into the empty cylinder. 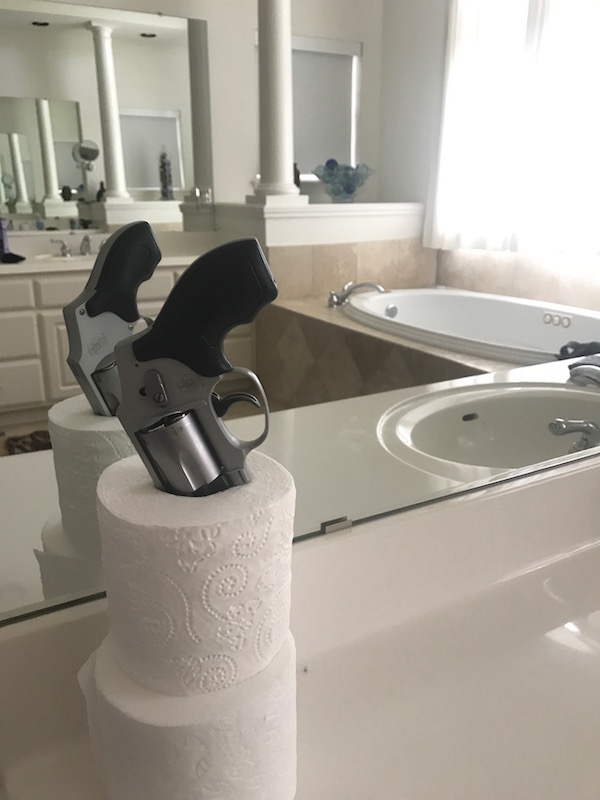 However, the revolver can be easily hidden in either an ankle holster or pocket holster, and can even be fired at very close range though said pocket, a stunt that would likely choke an autoloader for it would have insufficient space to cycle properly. They are also appealing to people who do not wish to learn the manual-of-arms of the autoloader, and valued for their obvious simplicity and at-a-glance confirmation of being in a loaded or unloaded state. Some of the currently popular choices in .38 Special include the Ruger LCR, Smith & Wesson’s Model 36 Chief’s Special and Model 442 Airweight (above), and Taurus’ Model 85 Revolver. All four would suffice as a good back-up arm or even a primary carry arm so long as the shooter is willing to put in the practice with it.

The .38 Special is the revolver equivalent of the 9X19 semiauto pistol round, which is, after all, only three years newer a development. Capable yet not-overpowered, accurate and easy-to-control except in aluminum framed 2” snubnose versions, it remains a solid choice for discrete carry and pleasure shooting days at the local target range. After all, it’s only been that way for one hundred seventeen years!