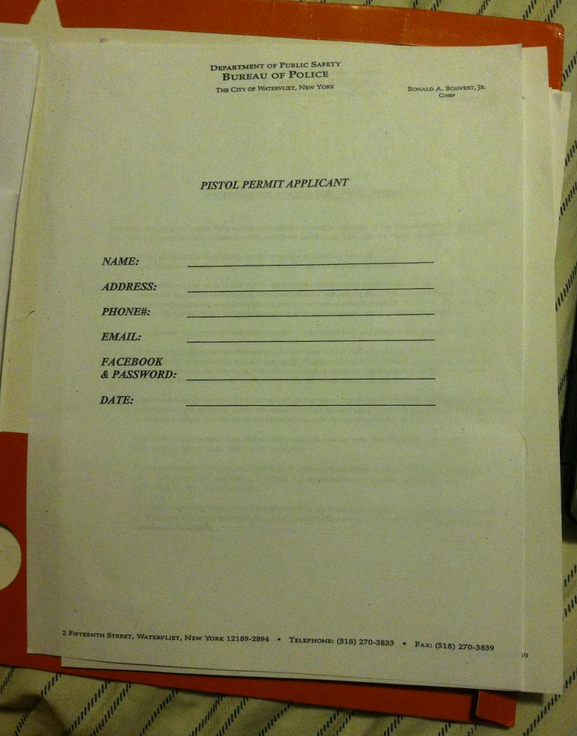 The photo above shows an application for a pistol permit as used by the Watervliet, New York police department. It comes to us from “Mazz,” a member of the nyfirearms.com forum [registration required]. As you can see the app asks applicants for their “Facebook & Password.” Considering the document’s homemade look and the absurdity of the request, I called the Watervliet PD for confirmation and clarification. I got Chief Ron Boisvert . . .

The Chief told TTAG that the sheet shouldn’t have been in the application packet – and won’t be in future. “It’s for internal use only,” he said.

“Pages they’re looked at, friends – anything that reflects on the character of the applicant.” I pointed out that there’s a big difference [in terms of privacy] between viewing a Facebook page as a friend and viewing it as the owner. The Chief wasn’t bothered by the distinction.

When I pointed out that checking someone’s Facebook page (in front of them no less) was unnecessary, unfair and unconstitutional, the Chief said “I’m just the middleman here” and “it is what it is.” He said the information gets sent to a Superior Court judge who makes the final decision. The Facebook search is, in fact, the judiciary’s idea. I mean, requirement.

I asked the Chief what would happen if someone refused to log on to their Facebook account. “I’d just note the fact and send it to the Judges.”

All of which proves the Empire State is still busy trying to see just how far they can get away from the phrase “shall not be infringed.” This isn’t the best example (New York City’s de facto gun ban is better), nor is it the last. But it does show how the Second Amendment protects all the rest. Or not.