The violence in El Cajon, California continues to simmer, especially as many “protesters” turn into rioters once the sun sets. Once more, we saw traffic blockades and violence against motorists, much of it racially motivated. Police made a couple of arrests, but mainly acted to keep the “protest” from becoming a full-blown riot.

CBS News has the story:

El Cajon, CA – Angry protests flared for the third straight night Thursday after a family attorney charged that an unarmed black man was unjustly killed by El Cajon police, and that officials were trying to sway public opinion by only releasing a single, favorable frame from video of the shooting. 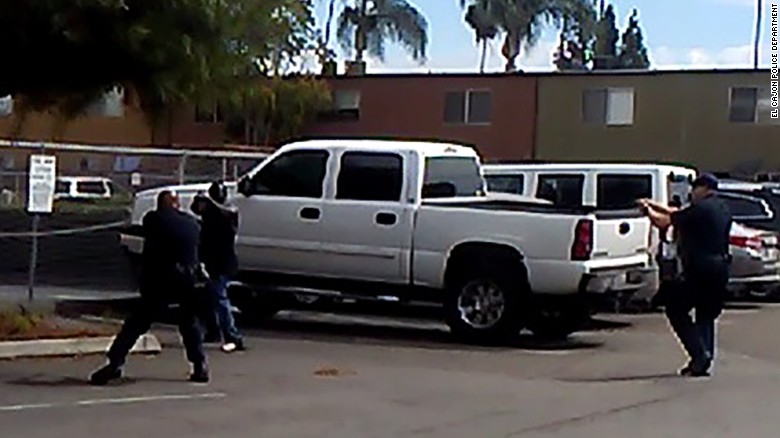 …Olango’s anguished mother said her son was a good, joyful man who suffered a “mental breakdown” over the recent death of his best friend and needed compassion when police encountered him. Pamela Benge said her family had escaped strife-torn Uganda to come to the U.S. for safety and she asked why police didn’t just shock her son with a stun gun or shoot him in the leg.

Where have we heard this before?  “Why don’t you just shoot him in the leg?” “Why not just use a stun gun?”

A better question from the perspective of law and order: Why should we handicap good guys any further when faced with what any reasonable and prudent person would believe to be an imminent and otherwise unavoidable threat of death or great bodily injury?

The evidence we have available to us right now, in the form of that screen grab and police statements, shows a man who has assumed a shooting stance while holding something he drew from his pocket. Given that the man reportedly acted erratically, and ignored repeated police commands, it’s not at all surprising that they fired when he pulled the object from his pocket and assumed a weaver-like stance towards one of the officers.

I’ve read criticisms that one officer fired a TASER while the other fired his handgun. Yes, one cop fired his TASER, probably because that’s all he had in his hand at the critical instant the suspect acted. But the protesters aren’t about learning the nuances of the law of self-defense or looking at things dispassionately. Increasingly they prefer traffic blockades to harass and intimidate motorists.

Black Lives Matter and similar groups are awash in a $100 million in donations from leftist foundations, including $33 million tied to George Soros through his Open Society Foundations and the Center for American Progress. They’ve got paid people working not to calm tensions, but to enflame them further. If you haven’t read up on Self-Defense as a Motorist in a Riotous Attack, you owe it to yourself to do so. The national social justice violence world tour might be coming to your hometown soon. It’s always good to have a plan. And know the law, too. Don’t let yourself or a family member become injured, killed or imprisoned for acting inappropriately in the heat of the moment.