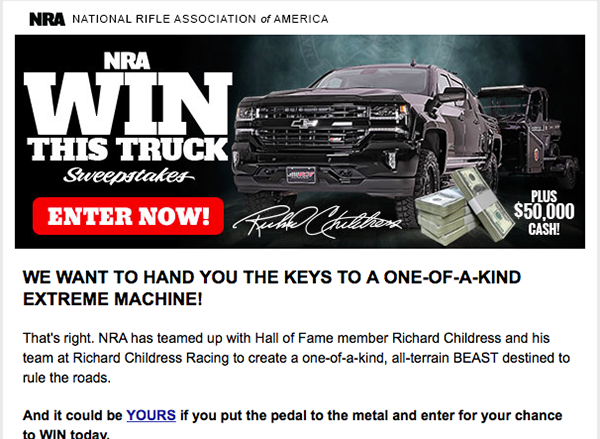 I can’t stand the spam! . . . The NRA Annoyed Me Into Quitting — But I Get Why Some Gun Owners See It as a ‘Necessary Evil’ (link to thetrace.org)

The main reason I left was they were bombarding me with emails and political garbage I had no interest in. So I quit. I had to call them to get myself removed from their lists.

They’re super annoying and aggressive. I was getting emails even after I wasn’t a member anymore, which was infuriating. They just kept bombarding me with more and more … I’m looking at my email right now. If I search “Wayne LaPierre,” I have 29 emails from him between 2009 and 2015, even after I quit. I have 30 emails from Wayne LaPierre that I never asked for.

This was during the Obama administration so it was like, “Obama’s taking away our guns again!” and all this crazy stuff. As we know, Obama is the best gun salesman ever for the NRA. They used him as a boogeyman to sell more guns.

Unnecessary cost, duplication of effort and needless delay is what government does best . . . The Army’s Substandard Ammo Magazine Needs to Go

In January, just two weeks after the Marines officially switched to the polymer Magpul PMAG GEN 3 magazine, Republican senators Joni Ernst, Tom Cotton, Jim Inhofe, David Perdue, and Johnny Isakson wrote a letter to Army chief of staff Mark Milley demanding to know why the Army hadn’t yet made a similar change. The PMAG had “zero magazine-related stoppages through all of the tests,” the senators noted, and it “reduce[s] damage to the chamber face and feed ramps when using M855A1 ammunition.” In addition, it is not affected by extreme temperatures — a vital advantage for military personnel in both the Army and the Marines.

In his response to the letter, General Milley agreed to move forward with more testing of polymer magazines and release the results in the next six to twelve months. But to many, another year of testing seems rather pointless. “I’m just concerned that the Army is going through a lot of testing all over again for a magazine that is already in use in the same rifle in the Marine Corps,” Ernst tells National Review. “We are duplicating what has already been done.” If we had to bet, we’d have guessed that the next caliber for the APX would have been .45. Shows you what we know.

Designed specifically for military and law enforcement operators, the APX has been put through extensive testing and evaluation at the professional end user level. The result is a pistol that delivers superior performance in durability and reliability, ergonomics, trigger, and modularity. Utilizing a removable, serialized chassis frame, the APX can be easily modified with replaceable grip frame housings and is simple to disassemble and maintain. Brits can sleep soundly knowing that the scourge of guns and the violence they inevitably bring have been eliminated from the land of Hope and Glory . . . Smiling killers GUILTY of killing ‘devoted dad’ Carl Campbell in Christmas drive-by shooting

Three smiling killers are facing life in jail for shooting dead a “devoted” dad in an horrific Christmas drive-by attack.

Carl Campbell, 33, died in a hail of bullets after he was ambushed at traffic lights near West Bromwich town centre on December 27 last year.

He died instantly when one of five shots aimed at a Ford Fiesta in which he was travelling ricocheted off the dashboard and hit him in the head. Is .38 Special the best all-around caliber in the history of the world ever? . . . Man kills 820Alabama man kills 820-pound wild hog in front yard with gun

Hogs aren’t unusual in rural south Alabama, but Wade Seago said he’d never seen anything like the 820-pound animal he shot and killed in his front yard.

Seago told al.com that he and his daughter spotted the massive hog in their yard in Samson last week after the family’s pet schnauzer Cruiser started barking.

“Cruiser had this huge hog confused with all of the barking and movement,” Wade said. “It was not a good situation.”

So the man got his .38-caliber handgun and took aim. It took three shots to drop the hog, Seago said, and he later weighed it on scales at a peanut company. A sign reportedly posted outside a lab at the University of Georgia rose to the top of Reddit on Thursday.

The sign reminds students that open-toed shoes, shorts, and loose clothing are not allowed in the lab, as they represent safety hazards that could put them at risk of catching fire or exposing their skin to chemical burns. But as of July 1, firearms are technically permitted. Concealed handgun permits in the United States soared by 1.83 million since last July, setting a record for the fourth consecutive year, according to an analysis released Thursday.

That brings the total number of concealed handgun permit holders in the country to 16.3 million, with some of the biggest increases occurring among women and African-Americans, the Crime Prevention Research Center (CPRC) said.

Concealed handgun permits are now held by some more than 6 percent of American adults, the CPRC analysis found. Outside the restrictive states of California and New York, that figure rises to about 8 percent.