Ronda Rousey: ‘Punks’ Broke Into My House…Stole My Guns

“[The crooks] stole my Olympic rings, stole my guns, stole all my precious jewelry, every headphone in the house, credit cards.” The good news for Rousey … she’s got security cameras at her home and they were quickly able to identify the thieves. “We saw that they were a bunch of kids with skateboards,” Ronda said … “And there’s a famous skate park right across the street cause we’re in Venice.” “So my man’s 6’7” like 260. He like beelines it straight to the skateboard park, finds the guys right away.”

Would you go after the guys who burglarized your house and stole your guns? 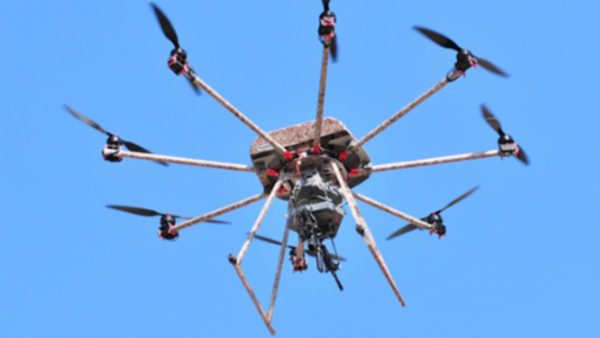 What was the date that SkyNet became self-aware? . . . Israeli Military Buying Drones That Can Hold Machine Guns

The Israeli military is buying drones that can hold machine guns, grenade launchers, and other weapons from a Florida-based startup, according to Defense One. Duke Robotics was co-founded in 2014 by a former Israeli battalion commander, Lt. Col. Raziel “Razi” Atuar, who said he was motivated to develop the small drone, dubbed TIKAD, in order to prevent loss of life in street battles.

Dash-cam video from Ferndale police shows a citizen crash his car to help them arrest a suspect who was fleeing from police last week. It is time for there to be national reciprocity for concealed carry permits, instead of the patchwork of laws governing reciprocity that vary by state. Virginia, where the (baseball) shooting happened, has reciprocity for some states’ concealed carry permits, but if members would have brought their guns back and forth from D.C., they would have been breaking the law. It should never be a crime to be responsibly prepared to defend yourself in any possible situation. Garmin International Inc., a unit of Garmin Ltd. (NASDAQ: GRMN), today announced the Foretrex 601 and Foretrex 701 Ballistic Edition, its newest wrist-mounted GPS navigators for outdoor and tactical use. The Foretrex 601 and Foretrex 701 Ballistic Edition helps users keep their bearings nearly anywhere in the world thanks to the built-in GPS, GLONASS and Galileo satellite system support.

In addition to its high-sensitivity GPS, the new Foretrex 701 Ballistic Edition adds Applied Ballistics Elite® software to calculate aiming solutions for long-range shooters. After a dominant showing at this year’s King of 2 Mile shooting competition, where the Foretrex 701 Ballistic Edition with AB Elite software made its first appearance, the advantages were clear. “Handling the various devices required to spot and engage targets with precision rifle fire can be an overwhelming task. Having your AB fire control strapped to your wrist frees up a hand for other tasks, which enables the shooter to execute more efficiently,” said Bryan Litz, champion shooter and Applied Ballistics Chief Ballistician. From your lips . . . The Second Amendment Issue the Supreme Court Can’t Avoid

“The question is, did I really lose?” Peruta asks. He points out that Trump’s electoral victory was spurred, in significant part, by concern about the future interpretation of the Second Amendment and the makeup of the Supreme Court. It was his case that “Second Amendment people” were watching anxiously as they went to the polls last November. Now, with Trump in the White House and Republican majorities in both chambers of Congress, those gun rights advocates might get their desired outcome, even without waiting for the high court to weigh in.

“Regardless of what happens, there has to be reciprocity,” Peruta says. “Reciprocity means you don’t have to buy five different permits to carry in every state you go through.” National reciprocity legislation—which would give gun owners the right to do in New York and Boston what they can do in Atlanta and St. Louis—has been introduced in both the House and Senate, and Trump has already expressed his support. Is this a great country or what? . . . Alabama roofing company giving away AR-15 with every roof

Digital Roofing Innovations is making quite a splash with its early marketing campaigns. The Decatur-based business has only been around about a year. A July 4 ad promoting the special on Facebook had been shared more than 400 times in its first six hours online.

“Donald Trump says make America great again. I say make America gun again. MAGA!” Owner Zach Blenkinsopp says in the ad, shirtless, wearing cowboy boots, an American flag hat and short star-patterned shorts while holding an AR15. “Some of you might be sitting there saying, ‘Man, this sounds like a gimmick.’ A gimmick you say? Well I’m a gosh darn Navy veteran, active duty eight and a half years. My roofing company’s not a gimmick and this baby’s not either. It’s here to protect you and your family.” The majority of Americans favor stricter gun controls, but gun owners are much more likely to be politically active and to contact public officials about their beliefs, according to a new survey that goes a long way toward explaining the political power of Second Amendment advocates. A man who tried to steal a helicopter at gunpoint outside a flight school in Oregon was fatally shot by police on Monday. The incident began when a man wearing a gray hoodie, with the hood up, approached the Hillsboro Airport’s chain-link fence and climbed over. An observer, who was there with his family to watch the planes, told police, “For a moment, I thought to myself that it was a little warm for the big, thick, gray hoodie with the hood over him,” according to the Oregonian. The man told reporters when the man jumped the fence, he rushed his family into the car and left the scene.

At 11:23 a.m., the man went up to a helicopter with a flight instructor and student inside as it was parked with its rotor spinning at Hillsboro Aero Academy, Lt. Henry Reimann, a Hillsboro police spokesman, told the Oregonian. The man opened the door, pointed a gun at the student and ordered the student out. Taxpayer money well spent . . . Stockton program would pay men not to shoot each other

The city is exploring a couple options in the hopes of curbing the number of violent crimes in the city.

The first option is out of Detroit called Project Greenlight. In this situation, live cameras would be set up inside and outside of businesses in Stockton, and the cameras would be monitored in real-time from the police headquarters.

The second option is more controversial out of the Bay Area. Richmond’s Advance Peace uses taxpayer dollars to pay men with firearm history to not shoot guns.

In exchange, the men can participate in adult fellowship, mentorships and job opportunity programs.

That program has shown some success at decreasing violence, but it’s unclear how sustainable to program can be.

I haven’t shot anyone in weeks. Where do I go to get my check?

Follow-Through (2017) from DucksUnlimited on Vimeo.