Even with an eye on bipartisan yuks the special can’t help but bash the Second Amendment. One “news” segment dubbed “Guns: Guns?” features a fake town hall offering two sides of the gun control debate.

Ned shoots the pro gun control expert to make a clumsy point. He then asks the Second Amendment supporter if his attack changed her mind about gun control. She blurts out, “maybe a good guy with a gun could’ve stopped you?”

The segment’s ideology is suddenly in your face … The spell cast by Helms’ shtick vanishes. Otherwise, we’re treated to one liners that shred every aspect of TV news. It always seems takes something horrendous to make a bureaucracy change . . . Air Force rolls out reporting reforms in wake of Texas church shooting

The new steps come after the Air Force failed to report the criminal background of a former airman to federal authorities, a disclosure that would have prevented him from purchasing firearms before he fatally shot 26 people last month inside a Texas church.

Multiple levels of command now have to confirm that required disclosures have been made to the background check system in all reported incidents, Ms. Wilson said. 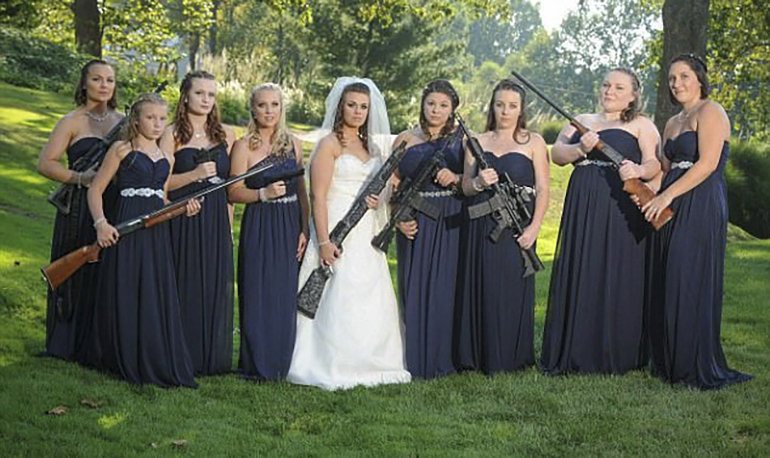 The best part of this is the horror it elicits in our friends across the water . . . A real shotgun wedding! Fans of the second amendment proudly brandish weapons during MARRIAGE ceremonies

These photos give a whole new meaning to the term ‘shotgun wedding’.

A shocking internet gallery shows fans of the second amendment proudly brandishing their weapons on their big day.

While the choice of ceremony might seem odd to most couples, gun-themed weddings appear to be becoming increasingly popular.

Time to Upgrade from Your VHS Era Bipod to the ZRODELTA DLOC-SS Aimtech Warhammer Bipod?

Who doesn’t like watching a great movie? It’s been that way forever and probably all of us have fond memories of watching one on VHS tape. Of course, most of us have moved on from there. It’s not that we don’t like watching movies on our own screens. That will never change. We just have better ways of doing it. When it comes to bipods, we still love the Harris designs for their universal appeal, but the improvements to those designs by ZRODELTA can really pay off. Here we’ll focus on their DLOC-SS Aimtech Warhammer Bipod. ABC sends Shannon a big wet kiss . . . How gun laws have changed in the 5 years since Sandy Hook

Shannon Watts, a mother of five who became a gun control activist in the wake of the shooting at Sandy Hook Elementary School, thought her advocacy work was going to be over shortly after it began.

On Dec. 15, 2012, the day after 20 students and six educators were killed by a shooter in Newtown, Connecticut, she started a Facebook group that eventually became Moms Demand Action for Gun Sense in America.

“I have never been impacted by gun violence personally,” Watts, who lives in Colorado, told ABC News. “I was just incredibly angry after the Sandy Hook shooting because I was seeing pundits on television saying the solution to the horrific tragedy there was arming teachers. And just as an American and as a mom, I knew that wasn’t right.” We all have a “gun” story. Mine is one with roots deep with the National Rifle Association.

I learned about the importance of the NRA mission as a young girl growing up in New York State. One Christmas my freedom loving, NRA proud grandfather gifted all his grandchildren life memberships to our organization. Knowing how important it was to him, I knew it was something I should care about too.

Guns have always been a part of my life. Dad hunted to put food on the table, and I remember him carrying concealed. When I was as young as eight years old, I started hunting and going to the range with my father for our local NRA Silhouette competitions. Eventually, shooting became my sport too as he and I worked and competed in practical shooting matches all over the northeast.