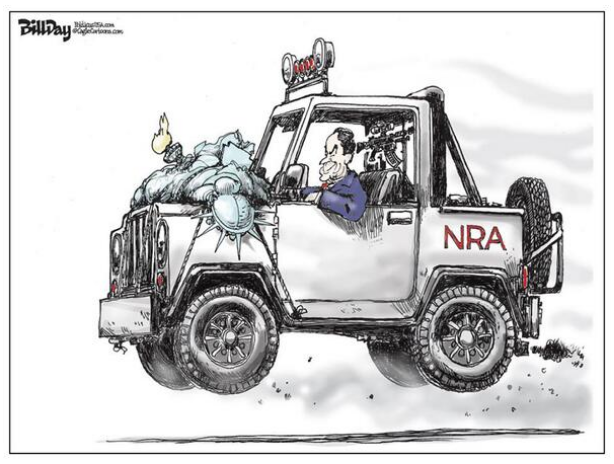 Gun lovers love liberty. Well, unless they work for the ATF. See what I did there? I took a shot (so to speak) at the Bureau of Alcohol, Tobacco, Firearms and Explosives (and Really Big Fires) without calling them a name. OK, sure, I’ve called them “goons” before. A few times. But there’s a difference between the take-no-prisoners rhetoric deployed against gun control advocates by TTAG’s writers and the buckets of bile thrown at pro-gun folk by people who support civilian disarmament. Just lately, I’ve noticed it getting worse . . .

I’m not referring to the image above. That’s bog standard stuff for gun-hating editorial cartoonists; artists who can no more make a living without malicious mischaracterization than a firearms trainer can without mnemonic acronyms. (FWIW) I’m talking about people like Shannon Watts, whose Mothers Demand Action for Gun Sense in America thinks nothing of threatening to “take out” pro-gun pols. And RI State Senator Josh Miller, who told a pro-2A agitator to attempt procreation by himself, with himself. And the Coalition to Stop Gun Violence, who retweeted the above cartoon to its 10.2k followers.

You could say that the antis are growing more frustrated – and thus nastier – as their hopes for a gun-free utopia fade in the face of firearms freedom. Georgia’s recent extension of concealed carry, for example, must really stick in their craw. The Ninth Circuit Court’s Peruta decision, affirming the right of law-abiding Californians to carry handguns in public, has got to leave a mark. Lest we forget, Illinois is no longer the last redoubt of anti-concealed carry fervor.

So no, I don’t think the antis’ increasing hatred springs from the resistance to universal background checks, magazine capacity limits, assault weapon bans, mandatory reporting of stolen firearms or any of their other disarmament dreams. These zealots and anti-gun extremists are not deterred by setbacks. I think their mounting ire’s down to the fact that their stranglehold on the mainstream media is becoming increasingly irrelevant. They can no longer hide the truth about guns.

Before the Internet Age, this video would have never been seen by anyone other than the person who shot it and his immediate circle of friends. As of this writing, over 7k people have viewed it. So far, some 155k watched the RI State Senator’s show his anti-gun debating skills, or lack thereof. That’s not much compared to the 22.5 million people who watch one of the three nightly news programs. But the pro-gun message is out there, somewhere, accessible to all.

Make no mistake. The anti-gunners are aware of the dangers of a free press. The entire gun control “movement” is based on unquestioned acceptance of a simple idea: guns are bad. Anything that can be done to restrict them is good. (Moms Demand Action’s occasional clam that they support the Second Amendment is entirely without substance.) Is it true that guns are bad? Don’t even think about it! Luckily people are . . .

Look at the anti-gun rally guy on the left of the screen at 1:32 into the video. The pro-gun advocate hands him a flyer. The anti-gun handler – the lady who calls our pro-gun guy a parasite – puts her hand out. She fully expects the onlooker to hand the flyer back to her as the others have, without so much as glancing at it. He doesn’t. He reads it. He ignores her outstretched hand and keeps the flyer. There’s your trouble. Well, not your trouble. The trouble faced by the antis. They can’t stop the signal.

According to Gallup (as reported by latimes.com), support for “stricter” gun control rose to 58% in the weeks after the Newtown massacre. By last October, it had fallen to 49%. You might think the drop reflects good old American ADD. I like to think it shows that the fence-straddling populace contemplated the difference between a crazy killer killing kids and responsible gun owners exercising their gun rights without government interference, and changed their minds.

In my recent “interview” with Elliot Fineman, the CEO of the National Gun Victims Action Council tried to filibuster my arguments challenging his belief that any American taking drugs for mental health issues should be denied their natural, civil and Constitutionally protected rights. He couldn’t engage in a proper debate because that’s not what gun control advocates do. They don’t parry. They proselytize. In fact, Elliot Fineman, Shannon Watts, Colin Goddard et al. are so used to preaching to the choir they fail to recognize that the devil’s calling the tune. Point that out and you’re the devil.

You know what gets their proverbial goat? Coherent thought. When the “silver-tongued Devil” starts making sense about armed self-defense and the unconstitutional, impractical, ineffective folly of gun control, when he refuses to let them change the subject, they behave like a cornered animal. They lash out blindly. No holds barred. Without manners or remorse. With pleasure.

In the video above, you can sense the woman’s joy as she calls out “parasite.” You can hear it when gun grabbers and their media minions lace into “the gun lobby” or the “pathetic people who support the NRA.” It’s not that the antis get off on their anger. They really get off on it. Their “you’re too stupid to understand what’s good for you” self-righteous fury creates a positive feedback loop. They’re right, so they’re angry; they’re angry, so they’re right. Even better, it’s all for the children.

I know: spewing hate to eliminate violence is like using violence to eliminate hate. There’s no sense in it – only a misguided sense of mission dressed-up as idealism. (As Bertrand Russell observed, “much that passes as idealism is disguised hatred or disguised love of power.”) The fact that there is opposition to civilian disarmament, that it isn’t composed of ignorant white racist rednecks, that it’s seeping through and around the mainstream media, is slowly dawning on the antis. They’re not happy. They’re “acting out” like never before.

Which suits me just fine. Remember that old playground rhyme: “I’m rubber, you’re glue; whatever you say, bounces off of me and sticks to you?” Like that.