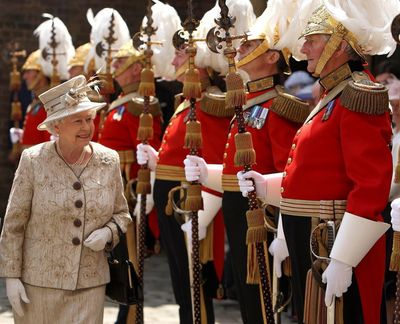 The British Royal Family. Some might say “off with their heads” but I couldn’t possibly comment. I will say this about that: what gives the Royals the right to enjoy the protection of round-the-clock Glocks wielded by tax-payer-funded bodyguards while their subjects are forbidden to own (never mind carry) a handgun for self-defense? Perhaps one thinks the rabble are not responsible enough for armed defense. Yeah? Well Divine Right of Kings this [via clactonandfrintongazette.co.uk] . . .

A Scotland Yard investigation has been launched after a policeman believed to be guarding the home of the Duke and Duchess of Cambridge accidentally discharged a gun while sitting in an unmarked car.

D’oh! But not unprecedented.

In June 2000 a royal protection officer accidentally fired two shots on the royal train while the Queen and Duke of Edinburgh were on board.

As an ironic reward for their exemplary gun safety TTAG hereby bestows  our IGOTD honors on the Royals’ security detail. Good job lads!