Jake Hamby has posted photographs of a small shop-manufactured .50 caliber single shot, scoped rifle. The rifle was captured from ISIS forces in Iraq. Many on the Internets are disparaging the rifle, characterizing it as a “face bomb” waiting to go off. Yes, well . . . It’s a mistake to judge a weapon by its exterior finish. Sure, guns like a pre-1940 commercial Mauser or pre-’70’s Colt are known for their excellent polish and bluing. But if you look at military production models, you’ll find perfectly useful and effective weapons with crude finishes. In fact, Webley put a “war finish” stamp on some of their revolvers — presumably out of embarrassment. The interior of their revolvers was very effective.

You can’t get a better reason for a “war finish” than the conditions ISIS is operating under. I would be willing to test fire it — if I were allowed to disassemble and examine the mechanism first. From an Internet examination, it seems to be a serviceable design.

Don’t discount the ability of the rifle to get rounds downrange with useful accuracy. Most of the needed accuracy would be in the barrel, which may be a standard barrel from another weapon.

If the barrel was made in a shop, that is a significant achievement. It may have been locally produced. ISIS contains decent lathes and milling machines in the territory it has conquered. The tack weld locking the barrel to the receiver is highly unconventional, but it works. 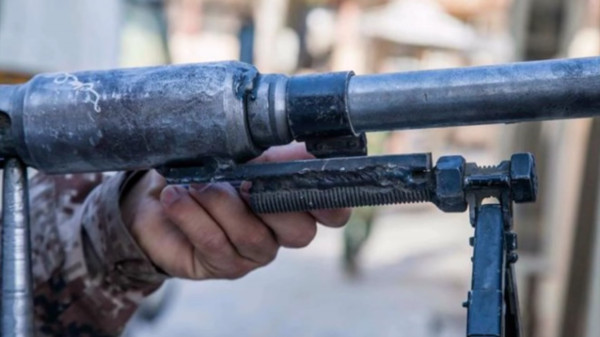 The scope looks to be a PU 3.5×22 Russian military rifle scope. It’s pretty sturdy. It was used as a sniper scope for the Mosin Nagant. I have doubts that it could stand up to the pounding of a .50 BMG single shot. The rifle’s designers tackled this problem with two solutions. First, the mounting system is extremely sturdy and welded directly to the receiver. Integral scope mounting systems are the best way to avoid problems. They have to be reasonably aligned with the bore. A simple bore sighting system used while welding on the mounts would allow for that alignment.

Second, there is the rubber bicycle innertube buffer between the scope and the mount. The oversized turnbuckle bolts used for tightening the mount to the scope use a lot of surface area to grip the scope. Whether the rubber buffer provides enough cushion to keep from battering the scope apart under the recoil of .50 BMG rounds would be a matter tested in practice. Again, a couple of hundred rounds service life is likely enough.

The bipod is adjustable for height and ground irregularities.

Headspacing problems would probably show up on the brass before the rifle would allow brass rupture from case separation. If you examined the fired brass, you could figure out when you would need to adjust the headspace. If not, the horizontal bolt and loading slots vent high pressure gases and molten brass to the sides, away from the face.

The inline, straight stock does much to soak up perceived recoil. The muzzle brake looks effective.

If the barrel is a standard .50 cal, a fixed 3.5 power scope should allow hits on man-sized targets to 800 yards. The scope does not have a rangefinding reticule. The vertical adjustments are calibrated out to 1300 meters for the 7.62×54 cartridge. It wouldn’t be hard to determine the range equivalents for the .50 BMG.  An over the counter laser rangefinder would be a force multiplier for this rifle

This rifle, while of crude finish, can likely fire .50 BMG to good effect. Those who want to outlaw .50 BMG in the United States should take notice. It’s up to us to bring it to their attention.