I was recently forced into a refresher course in scope mount quality when, at five inch-pounds shy of the maximum torque rating, I unexpectedly stripped the cross-bolts on a sixty-dollar Primary Arms Deluxe AR15 Scope Mount (30mm). I had hoped for better from PA.

Having lost confidence in the “deluxe” mount, but still needing to test a Primary Arms 1-6×24 Gen III optic, I began to review the numerous 30mm options out there. Predicting that the optic would be used across a variety of AR rifles and pistols, I narrowed my search to the more reputable, return-to-zero brands and quickly found the replacement I needed. I decided on Warne’s X-SKEL Gen 2 Extended Skeletonized 30mm MSR Mount for several reasons. Most importantly, my previous experiences with their mounts aligned with their reputation for excellent quality and repeatable results at a fair price.

And in my case, I happen to have Warne’s TW1 and TW65 torque wrenches in my range bag. The TW1 makes installing the scope into the rings very simple with its set torque rating. Warne’s TW65, also with a set torque rating, allows for quick and precise mounting of the optic into the desired host firearm. Yes, a quick-detach system is quicker and also doesn’t require tools and it was most certainly a feature I considered. However, competing models with the quick detach feature typically came at increased cost and sometimes weight.

Compared to the Gen 1 X-SKEL, the newer model provides an additional inch of forward cantilever, which is big change, no doubt influenced by Warne’s customers and sponsored shooters. The added cantilever also allows users to set the correct eye relief on scopes with large ocular ends or install a 45-degree offset mount.

Broken down and laid out, the 30mm X-SKEL, CNC machined from 6061 aluminum with steel components, exposes several key features that increase the value of the mount.

And yes, “tactical nut attachment” really is the official term per their packaging. Essentially, the term helps differentiate between the 1/2-inch nut, thumb screws, and quick detach options that are available throughout their line of mounts. Warne’s X-SKEL isn’t a skinny mount – it has purposeful bulk in areas, which helps with strength and stability. To offset the weight of the added material, Warne has skeletonized the mount in several areas such as both top and bottom halves of the scope rings (above) Out of the package, the 30mm MSR X-SKEL tips the scales at a very respectable 6.7-ounces. This equates to 30% reduction over their popular R.A.M.P mount, however this is also because Warne dropped the integrated 45-degree offset picatinny rail from the X-SKEL. One feature that surely sets Warne’s X-SKEL apart from similar mounts is the use of implanted steel thread inserts. You were wondering how their scope ring screws held a max torque rating of 25-inch-pounds, weren’t you? Like the X-SKEL’s scope mount ring screws, its cross-bolts are engineered to prevent them from slipping. While many companies just square-off one side of a round cross bolt, allowing the curved top half to sometimes rotate within the mount, Warne’s steel cross-bolts have a larger top-half with all square edges (above). The simple, yet very reliable, one-piece side clamp mates very well with 1913 rails, ensuring a solid, positive contact across the base of the mount. The cross-bolts are rated at 65-inch-pounds of torque. When I found time to mount the Primary Arms 1-6×24 Gen III in the X-SKEL, I wasn’t yet ready to pull the existing optic off of the test rifle so I used the cross-decking feature of The Device (on Brownell’s) which features a milled, dimensionally accurate M4 upper receiver rail.

Simply zero-out the rail so you have a baseline measurement. If you use a digital protractor like above, be sure it does not become stagnant and turn off automatically, resulting in a lost zero.

While admittedly completely unnecessary; I’m always interested to see which companies take the time and effort to ensure the top of the base and scope rings are level to the rail when mounted so I always take note. As you can see above, all three horizontal faces sit on the same plane as the rail they are mounted to. With proper eye relief pre-calculated, locking the scope into the X-SKEL was a very quick process with the TW1. Unless otherwise explicitly stated by the manufacturer, be sure to use non-permanent (blue) thread locker on your scope ring screws. 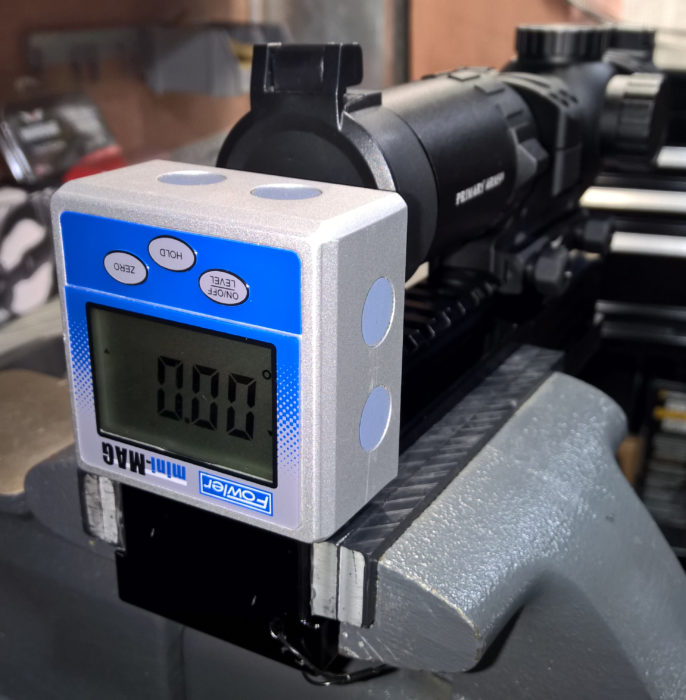 And, if possible, it’s always a good idea to check your foundation after scope mounting to ensure it did not shift during mounting.

Warne’s TW65 quickly loosened the scope from The Device and the scope and mount were ready to be mated with their host weapon for testing, an Aero Precision / Troy Industries MSR in 5.56 NATO. 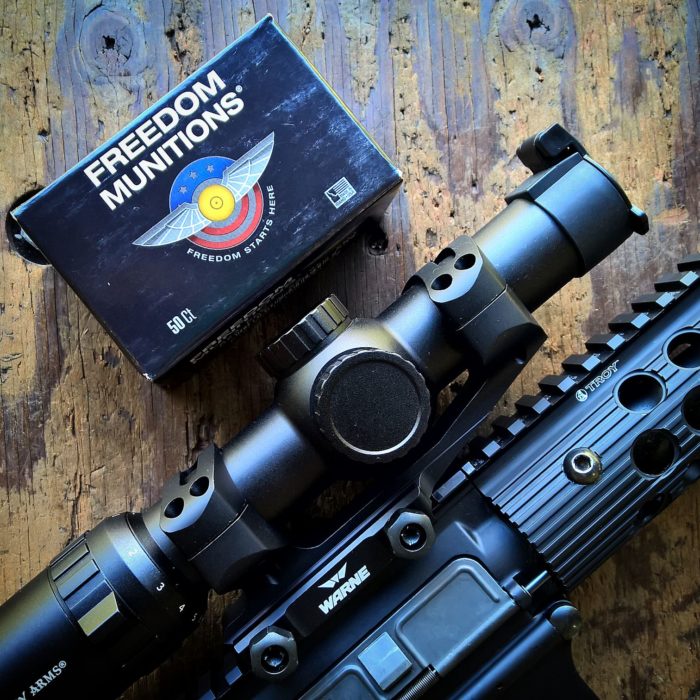 When the time came to swap optics at the range I simply set the pre-mounted scope into the upper receiver’s rail and, holding the cross-bolts to the front the chosen slots, each nut was torqued tight with the TW65.

After loading mags with Freedom Munitions 55-grain .223 Remington FMJ (new, not reman) I started throwing good vibrations through the gun, mount, and scope.

Speaking of FM ammo, a quick note that the coupon code “TTAG” is still valid for 5% off everything on Freedom Munitions website. That includes 23 brands of ammunition, as well as shooting accessories. The X-SKEL mount held strong as I dialed-in the scope at 50 yards. It felt rock-solid while turning the turrets – not even a hint of wiggle, shift, or slide throughout several weeks of use.

Every now and then I checked the cross-bolts and scope ring screws, but never once did I find one that had backed out even a little bit. With the scope’s reticle on point, I was punching baseline groups when another member of the shooting range approached me and inquired as to what I was shooting. After show-and-tell and a peek at the paper target down range the gentleman commented, “Looks like you’ve got her spot-on!”

I nodded and replied, “Well, I suppose it’ll do.” And after a brief pause I grabbed my TW65, loosened the X-SKEL’s hex nuts and added, “Guess I should probably break it now.” Mr. Member took on a horrified, confused look before returning to his shooting position.

After five removals and re-installations of the optic followed by groupings it became clear the X-SKEL most definitely has return-to-zero capability. The comparison above shows an average five-shot group before (left) and after (right) breaking initial zero. Warne Scope Mount’s Gen 2 30mm X-SKEL Skeletonized Extended MSR mount is a top-notch mount for any scope. It delivers repeatable performance on picatinny rail systems, is much lighter than previous models, and works perfectly with Warne’s torque hand tools for easy and quick installation and removal. If you’re in the market for a 30mm extended scope mount with 1913 mounting system, Warne’s X-SKEL mount is definitely worth the modest price tag.

Durability: * * * * *
The X-SKEL is built to take a beating in the field or competition and withstand less-than-idea transportation conditions. Its top-notch finish helps further protect it.

Repeatability: * * * * *
The X-SKEL performed very well through five removal and installation repetitions. No measurable point of impact shift was observed.