Choosing the right optic for your rifle is actually pretty difficult. Not only do you have to consider at what distance you’re likely to engage targets and pick an appropriate magnification. But you also need to decide on reticles, adjustments, whether you want a variable power optic or not. In short, there are tons of options and it gets confusing. Leupold decided to try and narrow the field for the discerning 300 Blackout shooter by producing what — at least on paper — is the absolutely perfect optic. But how does it do in the field? . . . 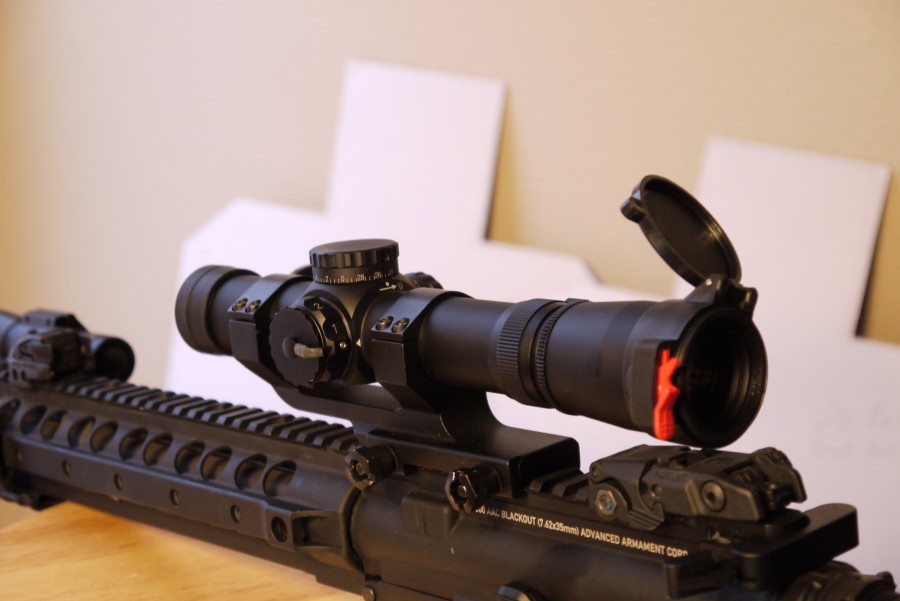 Leupold started with their latest model Mark 4 MR/T 1.5-5x20mm, the M2, which boasts a 30mm tube and their latest incarnation illumination mechanism. Instead of putting the battery compartment on the end of the scope, they mounted it where one would normally expect the parallax knob to go. The windage and elevation knobs are in their usual places though, both sporting 1/2 MoA adjustments (1/2 inch at 100 yards) and screws to allow the knobs to be zeroed.

Speaking of the illumination mechanism, its pretty good. It lights up the main dot and horseshoe pretty well, but it seems to have a tendency to “bleed” around the edges of the other markings. It does this less at lower intensities, though. Instead of some generic design, Leupold has gone for a dedicated 300 BLK reticle. The markings are calibrated for the 300 BLK round with a little assistance from Remington. It has the proper markings for supersonic ammo on the right side and subsonic ammo on the left (the center dot supposedly should be zeroed at 100 yards with supersonic ammo). And, in case you forget which is which, there are some handy pictures at the bottom to remind you.

But this is where we run headlong into the problem with this scope and caliber. For 5.56 NATO, you can assume that the customer is going to be running a 16 inch barrel with a 55 grain round and calculate the ballistics accordingly. But for 300 AAC Blackout, where everything from the barrel length to the bullet weight and velocity are highly variable from one manufacturer to the next, getting a scope to match up with what the bullet’s doing is going to be damn near impossible.

And that brings me to my pet peeve with these kinds of reticles. If you have a standard marking system (like mils or MOA) you can do the math on your own and figure out how high to hold at different distances. But if you have a reticle like this that does the math ahead of time for you, then you’re stuck. And if your ammo doesn’t match up to the markings, you’re really SOL.

So does this reticle match up with the ammo? To find out I brought five flavors of ammunition to the local 1,000 yard range and set to work testing them out. Out to 250 yards, life is grand. For all five varieties (PNW Match, Remington Premier, Remington UMC, Remington subsonic and my own handloads) the markings on the scope matched up with the point of impact for the ammo. Even the subsonic was hitting dead center. But once I moved past 250 to 500 and beyond, I started having issues.

That’s the problem with pre-calculated ballistics. Especially when — no matter how hard I looked — I couldn’t find anywhere that listed exactly what load was being used. There was a cryptic remark that Remington assisted with the ballistics (hence why I tried both of Remington’s supersonic offerings) but they never specified anything else about what they used.

And that, I think, is this particular version of the scope’s fatal flaw. The range markings are good enough to light up some bad guys with suppressive fire, but nowhere near where they need to be to make a precision shot. The glass is great, the mechanics are good, and the illumination is passable, but I’d much rather have the older version of the scope with the Special Purpose Reticle than the new one. Ballistic reticles are nifty, but whether you’re trusting one with your life or your hunting tags, you want it to be accurate. And I can’t verify the accuracy of the reticle.

Feel & Function * * *
The clicks click the proper distance and the knobs and stuff work, but the illumination spilling over the sides of the markings and the fact that I have no idea what ballistics they’re using for the markings make me slightly disappointed.

Overall Quality * * * * *
The scope itself feels well built. I took a tour of Leupold’s factory not too long ago, and the manufacturing quality of these scopes is beyond reproach.

Overall Rating * * *
With this specific reticle, I can’t go above three stars. If they told me somewhere, ANYWHERE, what ammo to use it would have been much higher. But since I have no idea what ammo to use to even begin trying to check out that the reticle matches the actual flight of the bullets I can’t recommend this scope for anything beyond 250 yards.