Double-plus un-good badthink in America’s armpit: NJ Highschooler Suspended for Anti-Gun Control Project – “A Manville, NJ student was suspended and ordered to go under a psychological evaluation after it was found out he was doing an assignment arguing against gun control. Student Frank Harvey was doing a project for class that was on gun control, arguing against it, when he left his flash drive with the project on it in the school library. The flash drive was then found and handed over to the school administrators.” Some thoughts are simply too dangerous to entertain in a government school. An empty holster, and stomach, as Va. Tech gun rights advocate goes on hunger strike – “When Ryan James Martin walks around the Virginia Tech campus, he wears an empty handgun holster at his side as a silent reminder to his fellow students that he is not allowed to bear arms there. Martin, a 22 year-old senior, is an advocate for the Constitution’s second amendment and a vocal critic of the university’s prohibition on carrying firearms around school buildings, dorms and classrooms in Blacksburg, Va. Martin believes the school’s policy is an infringement of his rights and prevents him from being prepared to keep himself and other students safe from harm should an active shooter storm the campus.” 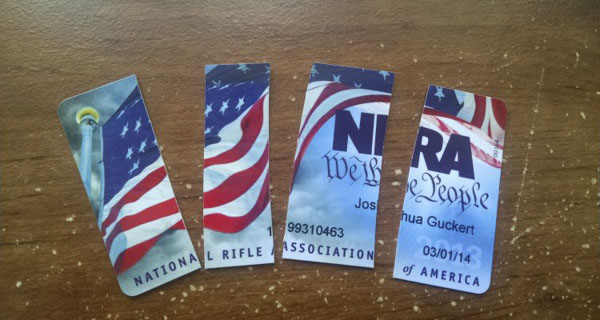 An unhappy Libertarian: NRA No Longer Deserves the Confidence of Gun-Owners – “The National Rifle Association (NRA) has failed in its duties to support American gun-owners and the more general cause of liberty. This first became noticeable early in the 2016 presidential election. In April 2015, the group held its annual convention in Nashville, inviting presidential candidates to speak. However, Rand Paul was not invited, almost exclusively because of his support of the National Association for Gun Rights. This was in spite of Paul having an “A” rating from the NRA. Now months later, the reality seems clearer. On May 20, the group endorsed Donald Trump for president.” D.C. to lift stun-gun ban after constitutional challenge by gun rights advocates – “The District government will not seek to enforce the city’s stun-gun ban against three residents who challenged the law, and court records show city lawmakers are preparing legislation to lift the long-standing prohibition. In a two-page order filed late Monday, the District agreed not to enforce a blanket city prohibition against importing, purchasing, possessing or using Taser-style weapons ‘for lawful self-defense in their residences.’ The suspension affects only three plaintiffs — a conservative blogger, a nurse and an armed-robbery victim — and will halt litigation for 90 days.” One tiny step forward. Castor couple admits to role in converting rifle to machine gun – “A Castor (Louisiana) couple has pleaded guilty to charges related to converting a rifle into a machine gun, U.S. Attorney Stephanie A. Finley said Tuesday in a news release. Michael Deen Reeves, 58, and wife Crissy Lawson Reeves, 37, of Castor, entered the pleas before U.S. District Judge Elizabeth E. Foote. Michael Reeves pleaded guilty to one count of manufacturing an unregistered firearm, and Crissy Reeves pleaded guilty to one count of transferring an unregistered firearm.”