Launch a grenade, plant a tree . . . US Army Asks for Biodegradable Ammo – “The request was made via the Small Business Innovation Research (SBIR) program. Specifically, the DoD wants ‘biodegradable training ammunition loaded with specialized seeds to grow environmentally beneficial plants that eliminate ammunition debris and contaminants.’ The ammunition the DoD wants to replace with biodegradable alternatives includes ‘low velocity 40mm grenades; 60mm, 81mm, and 120mm mortars; shoulder launched munitions; 120mm tank rounds; and 155mm artillery rounds.’ There’s also cartridge cases and sabot petals, which can either lay on the ground or end up buried beneath it.”

Last year’s Windy City murder rate was even worse than you thought . . . Chicago Homicides Even Higher Than Reported –  “The record-setting violence in Chicago is even worse than announced as new evidence shows the city suffered 50 more homicides last year than the numbers publicly reported in the past week. The city posted a decades-high homicide count of 812 in 2016, per the Cook County Medical Examiner’s office. That’s 15% greater than the 762 murders reported by the city’s police department.” Civilian disarmament heaven . . . How Japan has almost eradicated gun crime – “If you want to buy a gun in Japan you need patience and determination. You have to attend an all-day class, take a written exam and pass a shooting-range test with a mark of at least 95%. There are also mental health and drugs tests. Your criminal record is checked and police look for links to extremist groups. Then they check your relatives too – and even your work colleagues. And as well as having the power to deny gun licences, police also have sweeping powers to search and seize weapons. That’s not all. Handguns are banned outright. Only shotguns and air rifles are allowed.” 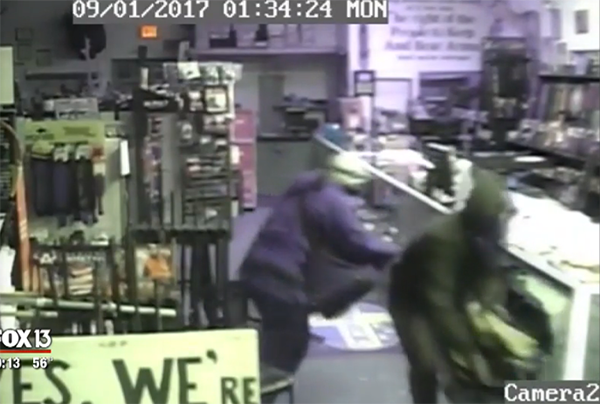 Sheriff blasts gun store after burglary – “‘Gun store owners, you have an ethical and moral obligation to protect your guns when you’re not there,’ said Sheriff Grady Judd. The sheriff said deputies had warned them before. ‘They went into the store without much resistance at all,’ said Judd. ‘These guns all go to the street. They all go to criminals. People like the man who shot an Orlando police officer is going to have those guns.'” Honey, you really shouldn’t have worn such a short skirt around here. They may want to worry about anti-Trumpers, too . . . Police Worry Radical Trump Backers Will Bring Guns To Inauguration – “DC police are increasingly concerned that some of President-elect Donald Trump’s supporters traveling to the nation’s capital for next week’s inauguration will be bringing not just heavy sweaters and down jackets, but firearms too. Police prepare for armed individuals at demonstrations and at the inauguration itself, but have rarely had to deal with any in recent memory: no gun related arrests were made during the 2009 and 2013 inaugurations. But with racial tensions high and coming on the heels of a divisive, sometimes violent presidential campaign, police are wary guns could make an appearance this year.” You know that recent report about .45 being the least effective self defense caliber? . . . WATCH: When an Armed Robber Tries Robbing a Gun Store, Things go Badly for Him – “How stupid do you have to be to even think this is going to go well? This robber apparently thought this would go smoothly. He was fatally shot on the spot.” Click the image above to view the video. OMG! Silencers! OMG! A new absurdity from the gun lobby: The ‘Hearing Protection Act’ (it’s actually about deregulating silencers) – “The gun lobby certainly is adept at promoting counterintuitive (and probably counterproductive) policy positions, such as that the answer to gun violence in America is more guns. Politicians certainly are adept at giving their bills titles that conceal their purpose, like calling a bill that narrows privacy rights and constrains civil liberties the ‘Patriot Act.’ Put these proclivities together, and you get the ‘Hearing Protection Act,’ introduced Monday by Reps. Jeff Duncan (R-S.C.) and John Carter (R-Texas). From the title alone, you’d have no idea that it’s about deregulating the sale of gun silencers.” Culture wars . . . Gun violence in PG-13 movies soars. Are ‘superhero’ movies to blame? – “(T)he omnipresent guns in the latest Star Wars movie also reflect a trend in Hollywood over the past 30 years toward increasing gun violence in superhero/fantasy/comic book-type action flicks aimed at children and teens — a shift that has created confusion about what differentiates a PG-13 movie such as ‘Rogue One’ from an R-rated film. Think characters like Batman, Avengers, X-Men and Transformers. In fact, according to a new analysis, the amount of gun violence in the 30 top-grossing PG-13 movies now exceeds the gun violence in the top R-rated flicks. And it is continuing to rise.” Double plus crimethink . . . Young hunter gets grief at school for shirt with eight-point buck – “Domonique Yatsko harvested her first deer on the last day of youth deer-gun weekend in November. It was an eight-point buck. To celebrate, a picture taken of the 9-year-old and the deer was put on a black sweatshirt. Heidi Yatsko told The Gazette on Thursday that her daughter proudly wore the sweatshirt to school the next day. ‘She was very proud when she took her first deer,’ the mother said. But when Domonique came home from school, Heidi said, she threw the sweatshirt in the garbage. Domonique told her mother she was ‘yelled at’ by her teacher and told to take off the sweatshirt because ‘killing animals is not what we do.’” How safe is your place of work?