The SIG P320 story just got more complicated. According to a suit filed in US District Court on Friday, a Stamford Connecticut police officer was injured when a SIG P320 pistol he dropped discharged when it hit the ground.

According to the complaint filed Aug. 4 in the U.S. District Court for the District of Connecticut, officer Vincent Sheperis dropped his holstered department-issued handgun while loading equipment into the back of his car in January. The gun fired when it hit the pavement, and the bullet entered beneath his left knee and lodged to the side “with the round protruding from his leg.”

Yesterday we reported that online retailer Omaha Outdoors had conducted drop tests on four P320 pistols and found that certain models can, in fact, discharge when dropped.

According to the suit, however, the Sheperis incident wasn’t a simple case of a dropped gun contacting pavement. The suit alleges that the P320 in question was holstered when it was dropped.

12.   Officer Sheperis’s P320 pistol discharged on mere impact with the ground, without the trigger being pulled or even touched, which defendant SIG represented was not possible in marketing materials for the P320

12.   It also discharged while it was fully holstered in a [Safariland] Model 6360 ALS/SLS Mid Ride, Level III Retention Duty Holster, which attaches to, and detaches from, a mid-thigh area mount worn by Special Response Team Members.

13.   Because it was holstered, the trigger was protected from any movement upon impact with the ground, in addition to the protection provided by the pistol’s own trigger guard and internal safeties which failed to prevent the weapon from firing.

14.   At no time before, during or after the incident did Officer Sheperis place his finger on the P320’s trigger or touch the holstered firearm in any manner. 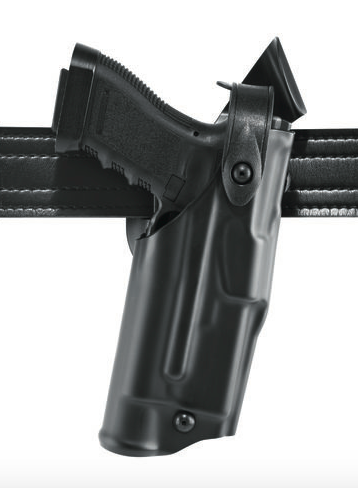 The timing of the suit is noteworthy as it was filed just a few days after reports circulated that the Dallas Police Department had suspended the use of P320 pistols for duty carry.

Sheperis, a 34-year-old member of the department’s Special Response Team, underwent multiple surgeries and is back on light duty, although more surgeries may be required, according to his attorney, Jeffrey Bagnell of Westport.

Sheperis is seeking at least $6 million in punitive and compensatory damages, and is demanding Sig Sauer recall the pistol or include a warning that the gun is not “drop safe” when a round is chambered.

“For it to just go off—it’s kind of horrifying, really,” Bagnell said.

Later today we will publish our own P320 drop test results along along with more information on this situation from SIG SAUER.