Earlier today we posted a piece reassuring readers that they can buy a SIG Brace for their AR pistol without risking ATF blowback. The post clarified a letter sent to Black Aces Tactical by the ATF, regarding their as-yet-unnamed SIG Braced Pro Series 5 short-barrelled shotgun variant (shown above and after the jump). The letter said the shotgun was legal – as long as the owner didn’t shoulder it. That was good enough for Black Aces’ owner and ex-Third Class Petty Officer Eric Lemoine. “We’ll send the gun out with warnings all over the place,” Lemoine told TTAG, “‘not to be shouldered’ will be in big letters and underlined, on the box, on a tag attached to the trigger, everywhere. And we’ll include the ATF letter in the paperwork” Lemoine insists that the warnings are not a legal work-around . . . 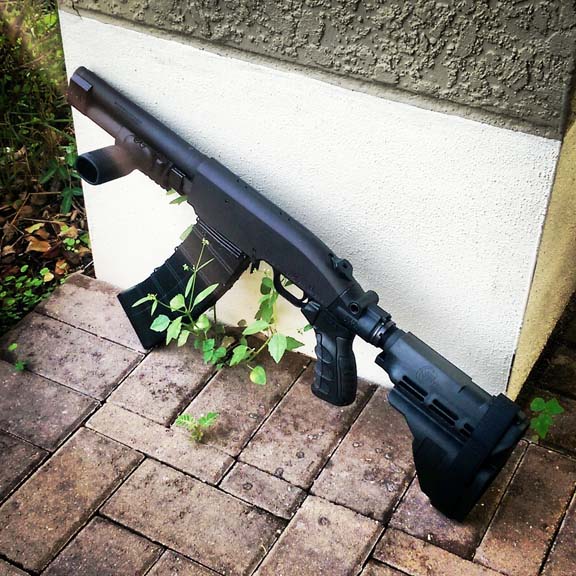 “The shotgun’s got a lot of concussion. It’s designed to be fired from a low ready position . . . You do not want that thing going off next to your face.”

Yes, well, boys will be boys. That said, any boy shouldering the Pro Series 5 with a SIG Brace risks 20 years in prison. (Just sayin’.) Black Aces Tactical hasn’t officially announced the SIG’ed-up shotgun. Lemoine says they’ll introduce the gun at $999. Customers are looking at a four-week wait – as opposed to the six to eight month wait for an AOW (Any Other Weapon) firearm. Unless sales go crazy. What are the odds?