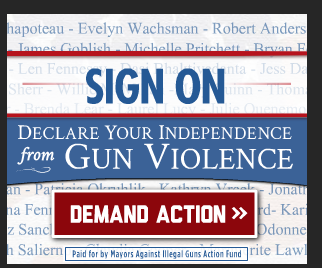 “Moms Demand Action has teamed up with Michael Bloomberg’s Mayors Against Illegal Guns Action Fund, placing an ad on the homepage of Thursday’s USA Today website, calling for signatures to a petition to ‘declare your independence from gun violence,'” politico.com reports. “More than 85,000 people have signed the petition as of Thursday.” Bullshit. MDA was created by a media maven for media mavens, despite the group’s indisputable inability to physically assemble a group larger than a quilting bee. If I were a blogger, I’d demand that Moms Demand Action submit proof of that number. Oh wait. Anyway, there’s another non-group out there using similar tactics (i.e. getting children to wave the bloody shirt) . . .

Next week, members of MomsRising will go to Capitol Hill with their children dressed in cow costumes to deliver small cow toys to Senators with the message that they should not be “cowed” by the gun lobby and to get “moo-ving” on gun policy.

Who dat? Strangely the group’s website and Facebook Page don’t say word one about the people behind their pun-based civilian disarmament campaign. And yet the media eats it up. Go figure.