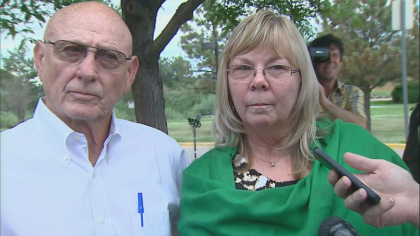 Over at huffingtonpost.com, Lonnie and Sandy Phillips [above], parents of Aurora cinema massacre victim Jessica Ghawi, have penned a post decrying the outcome of their lawsuit against Lucky Gunner for selling spree killer James Holmes “armor piercing” ammunition [their term]. The Phillips lost their suit. The judge awarded the respondents a $203k settlement. TTAG reader DH has this to say about that:

First,  Mr. and Mrs. Phillips, I’m sorry you lost your daughter. No one should have to endure that. You may want to stop reading now . . .

1.  Yes, the reason the judge ruled against you was that your lawsuit was frivolous.  In fact, it was the very kind of lawsuit the law was created to prevent.

2.  If your suit did have merit, then in all fairness you should have also sued, the maker of the car that James Holmes used to drive there, as well as the gas station that sold him the gas, and the refiner.  The City of Aurora facilitated by building the roads he used and you could probably go all the way back to the hospital where he was born, if you want to keep going down that path.

3.  You shock and anger that Lucky Gunner would donate the judgement against you to gun rights groups shouldn’t come as a surprise.  You attacked them in court and tried to impact their livelihood.   Im guessing had you been successful in your suit, you would have donated a portion to gun control groups, including your own, to further assault the rights of Americans who choose to exercise their rights legally.  I find this a bit hypocritical.

4.  The party responsible for taking your daughter was caught, tried and convicted.  James Holmes took her, not Lucky Gunner or any one else through negligence or malice.

Again, I’m very sorry for your tragic loss.  But in this particular instance. you brought this on yourselves.  And while you may play the hapless victim card, you are not.  You were the aggressor, and lost.