You can hear on hot mic (whoops) what Virginia dems think of ”gun nuts” during what he tweeted about (below) today. Have a watch and listen (between seconds :24 and :56):

Gun control advocates: We just want to have a conversation!

Also gun control advocates: Don’t respond and we’ll get out of this.

Dick recently posted this regarding that meeting:

Today, I once again had the privilege to chair the annual Fairfax County Delegation public hearing. I look forward to working with my General Assembly colleagues to deliver sensible progress for our county and communities. pic.twitter.com/Ub7QOlbrZU

And when you open that tweet, you get this notice: So he’s censoring what is easily viewable on his tweet. But you can click “Show more replies” . . . 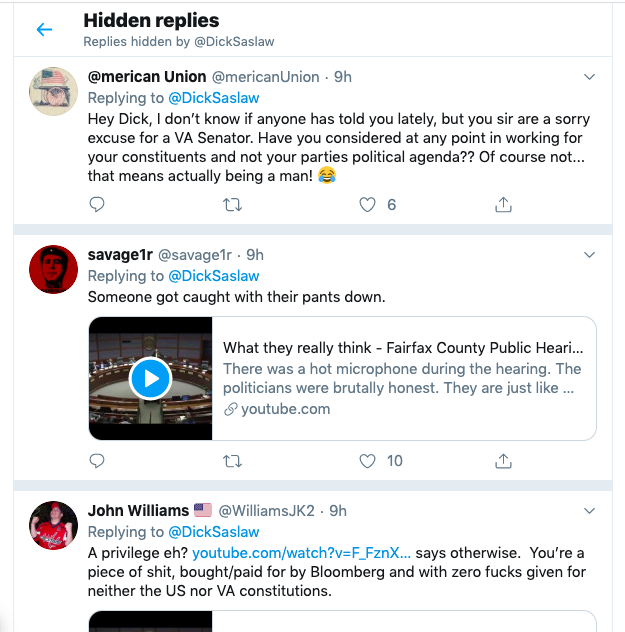 Why is all of this important? Because a federal court has ruled that public officials can’t block critics on social media.

From the Second Amendment champions at the ACLU:

One of the core purposes of the First Amendment is to allow people, regardless of their views, to hold the government accountable through expression. So, if your elected representative has an official Facebook page where she invites comments, can she block you from commenting because you criticize her work?

According to a federal appeals court, the answer is a resounding no.

On Monday, the Fourth Circuit Court of Appeals ruled that the interactive portion of a public official’s Facebook page is a “public forum,” so an official cannot block people from it because of the opinions they hold.

The case arose after the chair of a local board of supervisors in Virginia, Phyllis Randall, briefly blocked a critic from her official Facebook page and deleted a comment he made about her colleagues’ management of public funds.

Virginians, you are being censored by Senator Saslaw. It’s almost as if Virginia Democrats don’t care about the First Amendment any more than they do the Second.

Spoiler alert: they don’t in Illinois either.

In fact, one senator there, who introduced an “assault weapons” registration bill, taunted a constituent who opposed the idea and said she’ll just confiscate them instead.

She likes to block critics on social media, too.

This article was originally published at Mom-At-Arms and is reprinted here with permission.