Today’s Daily Digest is an embarrassment of riches — if you like to read about American citizens working to degrade and destroy your natural, civil and Constitutionally protected right to keep and bear arms. I haven’t seen this amount of anti-gun agitprop since Newtown. That’s despite the fact . . .

that the FBI could have stopped the killer before he attacked. As opposed to gun control, which offers lottery player odds of stopping a criminal, crazy or terrorist by making it more difficult — but not impossible — to get a gun. So here we go . . . 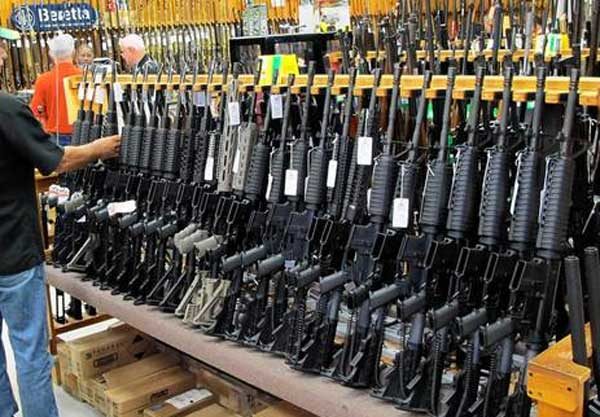 The more bullets a gun can fire rapidly, the more people will die.

Pretty basic stuff. We don’t need to twist elementary logic into a contortion.

Anyone who doesn’t understand this is probably a firearms addict in denial.

Let’s be clear: I’m not anti-gun. I grew up shooting, have owned firearms all my life and enjoyed them. I’m pro-common sense.

There’s absolutely no reason to possess a semiautomatic, military-style rifle with large-capacity ammunition magazines except to kill lots of people within a few minutes.

It’s not a good hunting weapon. And for personal protection, you’re better off with a 12-gauge shotgun or a handgun. Of course, with those weapons at home, you also might shoot a family member or yourself. This is a mental health problem and we’ve got to face the fact that this is an automatic military assault weapon. I want you to know I grew up on a ranch. I have grown up with guns. I have hunted all my life. I hunt with my son still. An AR-15 is not for hunting, it’s for killing. And the question is, should this be a legal weapon in our society?

Just think, all of these children are our children and if we were the parents of one of those children, if we thought that it was not easy to get an assault weapon, we might be thinking that one less child was dead. The fact is we can’t make our schools armed camps. I mean, that’s just not practical and it’s not reflective of our open society. The group Avaaz created the campaign, which features three trucks with billboard-like images splashed across the side. They read, “Slaughtered in school,”  then “And still no gun control?” followed by, “How come, Marco Rubio?” . . .

Rubio also chose a tack similar to President Trump when he labeled as “inexcusable” the FBI’s failure to follow protocols and inform the Miami Field Office after getting a warning that suspected shooter Nikolas Cruz had expressed a desire to kill and had displayed erratic behavior. Rubio called for Congress to initiate its own investigations into the FBI’s protocols for ensuring tips from the public about potential killers are followed through.

“The senator has taken fire across the country for his toothless response to the shooting, calling it ‘inexplicable.’ We call that inexcusable,” she said. Opinion: What if we solve the gun problem like we did with cigarettes? – Market Watch? WTF?

Some people have responded to the idea that guns are “killing machines” with the fact that these killing machines can be used for other enjoyable purposes that don’t involve killing. That’s true. But let’s go back to first principles here because that’s how I think about things, and I think it’s an appropriate way to think about this.

Guns were invented to kill. The first human uses of gun-like instruments were in China and the Middle East in various wars. They evolved over time as weaponry. They are literally designed to kill things. So, for instance, I can use a knife for lots of fun purposes, but at the end of the day it’s designed to cut things. The fact that a knife can be used for other purposes doesn’t change the fact that it’s a tool for cutting things.

Guns can be used for other purposes, but we should stop distracting from the fact that these weapons are designed for one primary purpose: killing Mayor Demands NRA Move Convention from Dallas — Because of the 1963 JFK Assassination – Or something . . .

Gun violence has played a significant part in Dallas’ historical past from the assassination of President John F. Kennedy to the five Dallas Police officers gunned down in July 2016 to the brutal murder of a mother of six children in District 4 this past Christmas. It is time to put the heat on the NRA and demand that they work with elected officials in our country to establish gun laws that protect our children and keep our communities safe.  We have got to take on the NRA. One Simple Step Toward Sane Gun Laws – One simple step towards fascism, actually . . .

Our first step toward sensible gun regulation is simple. Repeal federal laws that ban gun registries and gun tracking. Specifically, we could start by repealing the provisions of the 1986 Firearm Owners Protection Act that block the federal government from creating a gun registry, and make it difficult for states to build their own. Sorry, some of your guns have got to go – When you hear gun control advocates say they’re not coming for your guns, guess what? They are . . .

I’ve heard your arguments against all that I’ve said here, but the body count of innocent people keeps getting higher no matter how many “good guys” have guns. We have more guns than ever before and we’re not safer as a result. Sadly, we don’t have much common ground in this discussion. I will fight until some of those guns you own are gone. I will fight until there’s a much better system in place to ensure that guns don’t get in the hands of people who should never be near one. 5 things that are more complicated than buying a gun in Florida – Did CBS superimpose that fact over a memorial for the victims of mass murder? Classic agitprop. Anyway, I wonder how they feel about making it more difficult for people to exercise their right to vote by, you know, showing an ID. . .

Anyone buying more than 25 pounds of fertilizer is required to register and be screened against a known terrorist list. Yes, fertilizer.

So far, so in line with gun purchases. However, there are restrictions on the amount of fertilizer you can purchase in Florida because it contains ammonium nitrate, which, when mixed with other substances, can become explosive. Oklahoma bomber Timothy McVeigh infamously used large quantities of fertilizer to make his bomb, prompting the federal government to clamp down on the sale of the gardening compounds (15 years later).