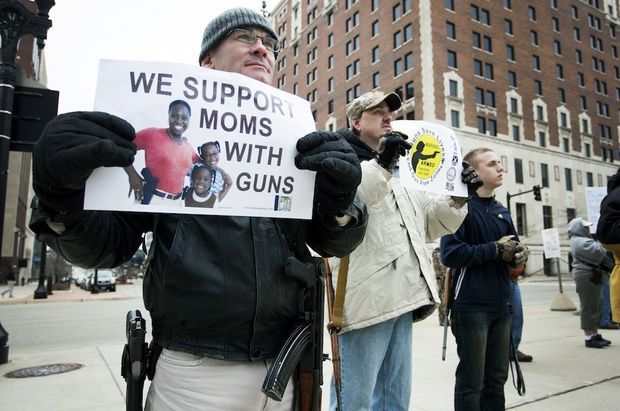 Yesterday was Open Carry Day at the Michigan state capital in Lansing. “’I was watching them out my office window and they were marching around the Capitol with signs and guns. And if they entered the Capitol, they would have to leave their sign outside,’ but not their firearms, said state Rep. Jeremy Moss, D-Southfield, one of the sponsors of the legislation. ‘So there’s a disparity in that we favor the second Amendment over the First Amendment.’” Naturally, he’s proposed banning the guns and allowing the signs inside the building. Allowing both rights, unimpeded, would never occur to a dedicated statist. In marginally better news . . .

These 3 California school districts allow staff to pack guns to work – “Our narrow practice of allowing select, law-abiding employees to securely store and access a firearm in the event of an emergency is a legal and appropriate safety measure given the unfortunate reality of violence in our society today.” Now you know where to send your kids to school in the Golden State.

Arizona House Republicans Beat Back Measure Telling Them To Leave Their Guns At Home – Good. Now how about allowing everyday Arizonans to carry in the capitol, too?

TTAG is a Lucky Gunner affiliate. Please consider supporting the site (without cost to you) by clicking he banner at the top when you buy ammunition. Thank you.