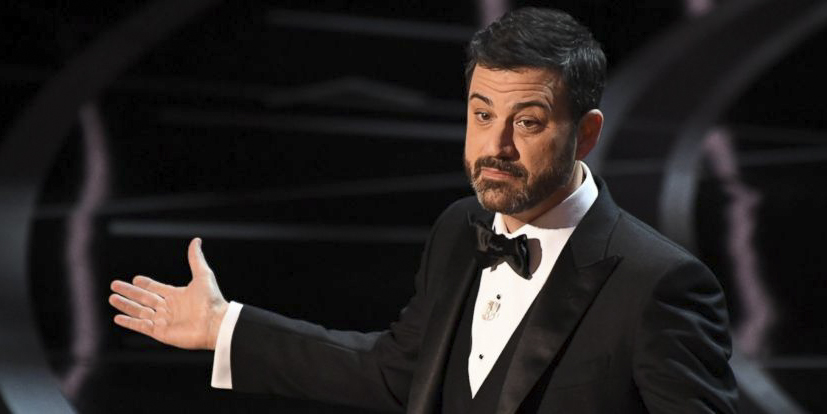 Actors Lectured America (Again) About Gun Control While Men With ‘Assault Weapons’ Protected Them at the Oscars – Let’s thank them for taking time out from raping and harassing each other long enough to impart their wisdom to the rest of us . . .

Another year at the Oscars came and went over the weekend with predictable lectures about gun control from Hollywood’s elites.

During Sunday night’s show, which was rated the lowest in televised Oscar history, everyone from host Jimmy Kimmel to actor and rapper Common took shots at American gun owners and the National Rifle Association. The gun confiscation organization Everytown, funded by former NYC Mayor Michael Bloomberg, was also in tow providing talking points.

“Tell the NRA they’re in God’s way and to the people of Parkland we say asé,” Common rapped from the stage. Broward County Sheriff’s Office Oversaw Concealed-Carry Training for Mosque-Goers – So protecting houses of worship with concealed firearms is OK, but protecting children in schools is an insane idea. Got it.

The Broward County Sheriff’s Office oversaw a training session led by one of its deputies to teach mosque-goers how to carry a concealed weapon.

Sheriff Scott Israel officially oversaw the side job of Deputy Nezar Hamze, a Muslim American, as regional operations director for the Florida chapter of the Council on American-Islamic Relations (CAIR), according to documents obtained by National Review from the Broward County Sheriff’s Office. Israel had a representative sign for him on the form that gave Hamze permission to work for CAIR. New Gun Bill Would Mandate Reporting of Buyers Blocked by Background Check – Common sense gun legislation we can all get behind?

A bipartisan group of senators today unveiled legislation requiring federal authorities to notify state law enforcement officials when a person barred from purchasing a gun attempts to do so.

The NICS Denial Notification Act was introduced by Sens. Pat Toomey (R-Pa.), Chris Coons (D-Del.), Marco Rubio (R-Fla.), and Bill Nelson (D-Fla.), and co-sponsored by Sens. John Cornyn (R-Texas), Tammy Duckworth (D-Ill.), Lindsey Graham (R-S.C.), and Claire McCaskill (D-Mo.). The senators argue that those who fail the background check and violate the law when trying to get a gun — such as convicted felons and domestic abusers — are rarely prosecuted. America’s Gun-Culture Problem — The problem isn’t the guns, it’s you.

For now is the time for tension. Gun owners should feel uncomfortable by the atrocities taking place in American schools. American politics should not be dominated by those Americans who play soldier by owning assault rifles or other tactical weapons, and whose insecurity about their own identity is so pronounced that they need to buy more and more small arms to compensate for that insecurity.

Changing culture is hard, and it’s harder still when organizations like the NRA and the gun manufacturers it serves have a vested interest in convincing Americans to buy more and more firearms on an annual basis. But if America wants to reduce gun deaths and preserve gun rights for future generations, it needs to reverse the cultural shifts in attitudes toward small arms that have taken root in the past 20 years. Alabama Ready for More Gun Control, Sen. Doug Jones Says — Deep red Alabama managed to lose a Senate seat to a Democrat…and this is what happens.

Jones wants tighter background checks for gun sales and to raise the age requirement to purchase a gun from 18 to 21, and he thinks Alabamians are on the same page. The NRA and its allies use jargon to bully gun-control supporters – Stop the gunsplaining! The media don’t like it when you point out the fact that they have no idea what they’re talking about when they talk about guns . . .

The phenomenon isn’t new, but in the weeks since the tragic shooting at Marjory Stoneman Douglas High School in Parkland, Fla., a lot of gun-skeptical liberals are getting a taste of it for the first time: While debating the merits of various gun control proposals, Second Amendment enthusiasts often diminish, or outright dismiss their views if they use imprecise firearms terminology.

Perhaps someone tweets about “assault-style” weapons, only to be told that there’s no such thing. Maybe they’re reprimanded that an AR-15 is neither an assault rifle nor “high-powered.” Or they say something about “machine guns” when they really mean semiautomatic rifles. Or they get sucked into an hours-long Facebook exchange over the difference between the terms clip and magazine.

I Wanted to Be a Good Mom. So I Got a Gun. – The New York Times wanted to seem fair for a femtosecond or two so they found themselves a pro-gun Mom — who thinks due process-free gun violence restraining orders are common ground . . .

Many gun owners insist the answer isn’t a ban, but rather evaluating who can obtain these weapons. President Trump is now reportedly considering the idea of gun restraining orders, which have the ability to quickly take firearms away from those considered dangerous, like the shooter in Parkland. A variation of this law is already on the books in California.

In 2016, 86 of these restraining orders were issued, and 10 were extended past the initial 21-day period they were granted for. Our side insists that people are the problem, not guns, and to make good on that we need to come to the table with ideas on how to keep weapons out of the hands of dangerous individuals who have no business holding them.

This idea . . . isn’t a panacea. But it is a middle ground for gun-rights supporters and gun-control activists to meet. Many supporters of the Second Amendment know something is broken, just as its opponents do, and ideas like Mr. French’s can bring many more to the negotiating table than calling for outright bans on guns or the notion that there are no legislative solutions to the gun violence issue.