May they know the same amount of success in these efforts as they have in trying to push gun control . . . Moms who became gun control activists are now running for office

Gustafson, who lives in Ankeny, Iowa, on the outskirts of Des Moines, says the qualities that come with being a mother – tenacity, problem-solving and persuasion skills — have made her team effective activists and will make her a good legislator.

“We can polite you to death. We are extremely persistent. We don’t take ‘no’ for an answer, but we will bring cookies,” she explained. She said she honed her skills talking to the most hardened NRA supporters and learned not get her feathers ruffled.

“Mothers are used to getting toddlers and teenagers to do things they don’t want to do,” she said. 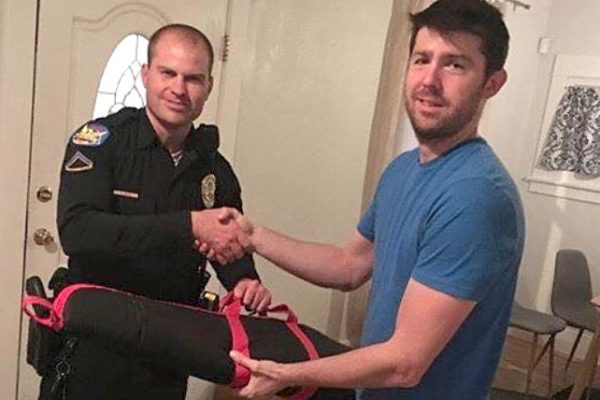 Mike the Gun Guy discovers there’s a big commitment gap between gun controllers and Second Amendment supporters . . . Man Who Turned His Guns In After Las Vegas Should Be A National Story

If only I had a nickel for every time that some GVP (gun violence prevention) advocate or influencer complains about the “power” of the NRA without mentioning the degree to which opposition to the NRA on social media is so tepid and weak. When some deputy sheriff from Podunk makes a statement about how he supports concealed-carry, the NRA shouts out the message from here to kingdom come. But here’s a guy who made a remarkable statement about the risk of legal gun ownership and the GVP community responds to his message with a big yawn. Shouldn’t the Brady Campaign invite Jonathan Pring to come to DC and accept an award? Shouldn’t Gabby and Mark fly out to meet with him? God knows they go everywhere else.

If GVP is ever going to reverse the continued growth of support for gun “rights,” even among people who don’t own guns, their activists must become much more aggressive about using social media to promote their point of view. The video posted by Jonathan Pring showing him giving his guns to the cops should have been the featured post on every GVP Facebook site. And that’s the way you reach out to a wider audience rather than continuing to talk only to folks who already agree with what you say. The Nation argues against itself . . . Almost 4 Million Americans Have Anger-Control Problems and Are Packing a Gun

The NRA calls for better mental-health care as a way of deflecting calls for gun control. But even if more gun owners received treatment for mental-health issues, (Duke University professor of psychiatry Jeffrey) Swanson says that, while his team “did find that many of these individuals would meet criteria for some kind of psychopathology, it didn’t tend to be the kinds of disorders that characterize populations that are involuntarily committed and would thereby lose their gun rights under existing federal law.” Many of these angry gun-owners abused alcohol or drugs, or suffered from depression, anxiety, PTSD, compulsive gambling, and other personality disorders that would not make them ineligible to buy a gun or two—or seven.

And even if more limitations were imposed on people with mental illnesses, it’s important to keep in mind that most mentally ill people aren’t prone to violence—mental illness alone is a bad predictor of gun violence. According to Swanson, the mentally ill are responsible for around 4 percent of violence in this country, “so even if we somehow rid society of mental illness entirely, we’d only reduce the violence by a marginal degree.”

So what’s the point of the article? 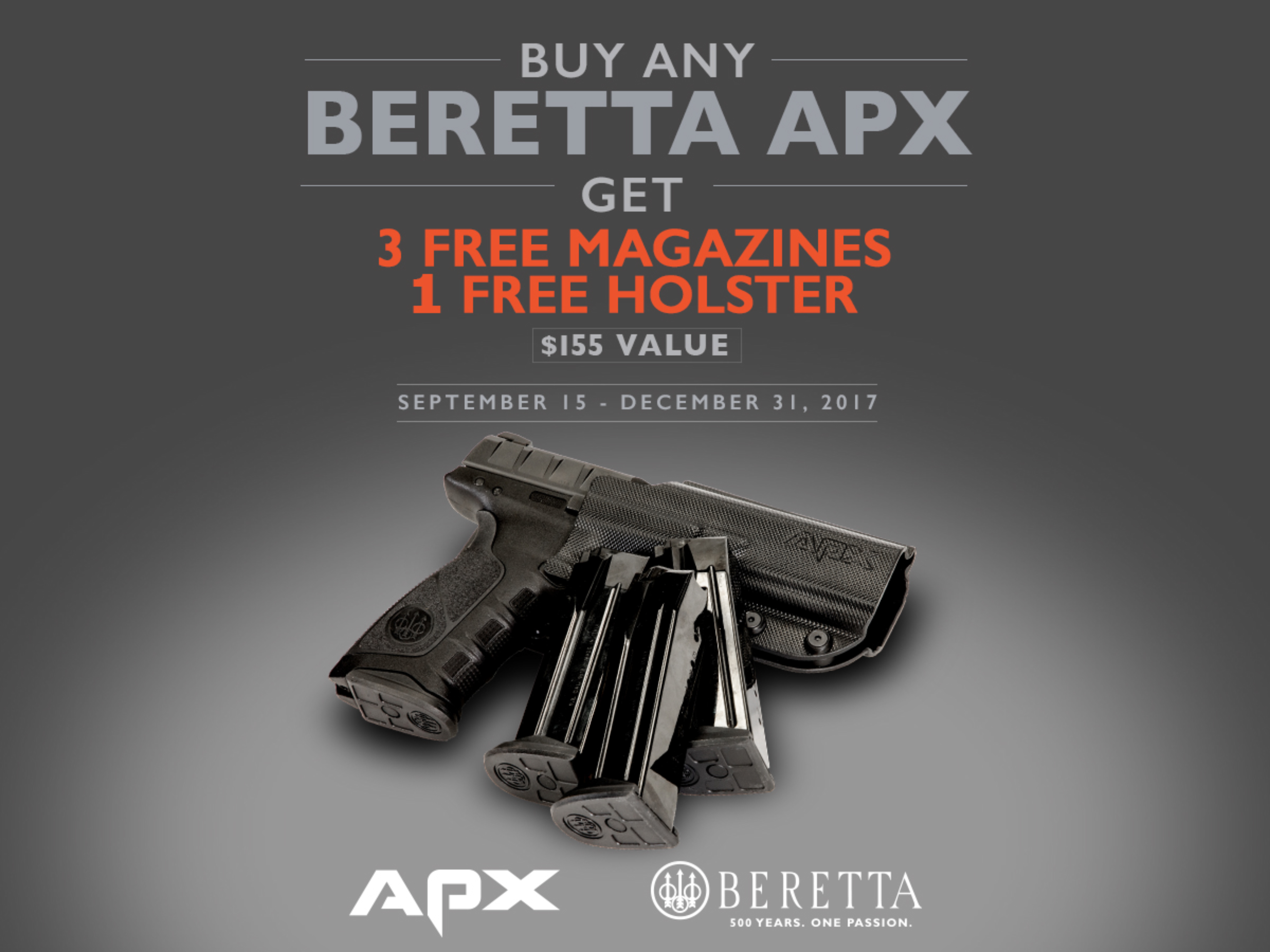 Beretta is offering three free magazines and a free holster with the purchase of any new APX striker fired pistol until December 31, 2017. For details on this promotion visit the online promotion page.

With the APX, Beretta delivers to the civilian market a pistol platform with superior performance in durability, reliability, accuracy and ergonomics. Nearly five years of incorporating both extensive laboratory research and feedback from hundreds of professional end-users ensures the APX is built to accomplish the mission, be it duty related or for personal protection. You can never “buy” a politician, you can only rent one . . . NRA Doesn’t ‘Buy’ Politicians, but Gun Controllers Do

An October 2015 New Yorker article by James Surowiecki came to a similar conclusion. The piece quoted UCLA Law Professor Adam Winkler, who explained why NRA is able to influence politicians without spending as much as other interest groups, stating, “N.R.A. members are politically engaged and politically active. They call and write elected officials, they show up to vote, and they vote based on the gun issue.”

A few of the more honest gun control advocates acknowledge this reality. In 2016, the president of Global Strategy Group, who was hired to consult for gun control group Americans for Responsible Solution, said to Politico, “[NRA’s] money isn’t that big… It’s not what they do. Their power rests in their stupid postcards and their ability to terrorize members on the Hill and have them panicked about their rating.” Details of the incident in Kingsheath Avenue, Knotty Ash, emerged after Paul O’Neill, the driver of the Audi which knocked the pair off the scooter, appeared in the dock at Liverpool Crown Court.

O’Neill, 50, who walks with a stick, pleaded guilty to possessing a firearm with intent to cause fear of violence and dangerous driving on August 20 last year.

Charges of possessing a firearm with intent to endanger life and conspiracy to cause grievous bodily harm were dropped. It’s always been a pipe dream of the left . . . Flawed Idea of Gun Registration & 347 Million Plus Firearms

And the record of registries doesn’t provide hope for their supporters. Canada found that its long-gun registry costs billions of dollars while doing nothing to reduce crime or save lives. A parallel effort at keeping a ballistic database of handguns in Maryland—which is a registry in all but name—also resulted in not one criminal case being solved.

There is also the matter of the number of otherwise law-abiding people who would refuse to participate. Despite the stringency of the NY SAFE Act, including a requirement to tell law-enforcement about the “assault weapons” owned in the state, as Tom King, president of the New York State Rifle and Pistol Association, put it, the registry “still may be law, but the people of New York state have repealed it on their own.”  Of course, it’s only the law abiding who would have to register their weapons. Under the Haynes v. United States (1968) ruling of the Supreme Court, demanding that felons do the same would violate their right against self-incrimination, since they’re not supposed to be in possession of firearms. California lawmakers love gun control. Gov. Jerry Brown signed no less than six different bills designed to restrict gun and ammunition sales in the Golden State last year alone, and a number of the leading candidates to replace him as governor are running on a platform of even more regulation.

There’s not an aspect of legal gun ownership that isn’t in their crosshairs, so to speak.

But at the very same time that Sacramento politicians want to punish legal gun owners, these same lawmakers just passed Senate Bill 620 — which would strip mandatory sentencing enhancements for criminals convicted of committing a felony with a gun.

After all, why waste valuable prison space on somebody who robbed a liquor store with a sawed-off shotgun when we clearly need it for the dangerous lunatics who use the wrong gender pronouns?