In the Pennsylvania countryside in the early 18th century, a uniquely American firearm was born that helped thirteen separate colonies defeat the greatest empire on Earth, form one nation, and span a continent. It is fitting that this new weapon was a conglomerate of ideas and built initially by German immigrants in the north and famously used by Anglo woodsmen in the south who became symbols of American ingenuity, self-sufficiency, and determination. In the years following the Revolutionary War until the wide spread adoption of the percussion system, the long rifle reached its pinnacle in small shops in Pennsylvania, Maryland, and Virginia. Many are outstanding testaments to their skill and true pieces of Americana.

It is in this period that they earned their famous nickname from the men who famously used them: the long hunters who explored the Virginia backcountry known as Kentucky. Though they are more properly known as American long rifles, prior to the War of 1812, Andrew Jackson’s astounding victory over a superior force of British soldiers at New Orleans in 1815 solidified their nickname in our national memory. The song “The Hunters of Kentucky” about the battle contained the famous lines: “But Jackson he was wide awake, and wasn’t scared at trifles, For well he knew what aim we take with our Kentucky rifles.”

Those of you who attended or followed the last RIAC Premiere Auction undoubtedly noticed the wide array of beautiful early American rifles. Many of these rifles came from the extensive Piedmont Collection. Our December Premiere contains another installment from this collection as well as rifles from other collectors. Many of these rifles were built by some of the most talented American artisans of the early republic. Their names are immediately recognizable by those who collect these pieces of art: John Armstrong, Jacob Dickert, Simon Lauck, John Moll, John Noll, John Rupp, George Schreyer, Frederick and Jacob Sell, Peter White, and many more. Each of these pieces is truly a masterpiece and several contain incredibly rare attributes. The Kentucky’s roots came from two other firearms in the early 18th century: the shorter, larger caliber German Jaeger rifles brought from the Old World to the New by German immigrants and the long smoothbore fowling pieces and trade guns manufactured primarily in England and Western Europe and imported in large numbers for the fur trade. Why exactly these two forms were married has continually been debated. What is clear is that fowling pieces and muskets were not well suited for taking game at considerable distances, and their larger bores meant they used a greater amount of lead and powder, which were more destructive to pelts and meat. This also meant that a hunter, be they Native or Euro-American, had to carry more weight in ammunition and had to get closer to their targets.

The Kentucky not only improved on those issues, but its long, rifled barrel also offered other advantages: the extended barrel combined with blade and notch sights provided a long sighting plane which allowed hunters to more fully utilize their rifle’s potential accuracy and also had the added benefit of providing more time for the slow burning black powder to combust and thus maximized power even while firing smaller, lighter balls. An experienced rifleman could hit a man or deer sized target reliably at 200 yards or more.

By the time unrest was growing in the colonies in the latter part of the 18th century, gunsmiths were producing a firearm that was found nowhere else in the world. Once the first shots were fired at Lexington and Concord, the American woodsman and his long rifle rose to the challenge. Many fought in local militias, but the Continental Congress also approved ten rifle units during the war including Daniel Morgan’s famous riflemen. They harassed British soldiers and targeted officers from outside effective musket range to remove key leaders from the battlefield and damage enemy morale. Morgan’s men later defeated the infamous Banastre Tarleton at the Battle of the Cowpens.

In 1780, the “over the mountain men bested a Loyalist militia armed with smoothbore muskets by picking them off at range at the Battle of Kings Mountain and turned the tide of the southern campaign against Lord Cornwallis. George Rogers Clark led a group of Kentucky militia and seized the isolated settlements in Illinois justifying the American’s claim to the vast swath of territory between the Appalachians and the Mississippi River. At this stage, long rifles were still fairly plain and typically had wooden patch boxes, but his younger brother William carried a Golden Age rifle during his famous exploration of the Louisiana Purchase with Meriwether Lewis and the Corps of Discovery. Thus, while the majority of American soldiers during the Revolution were armed with smoothbore long arms, small groups of riflemen used their advanced weapons and prowess to make considerable contributions to the cause. Among the wide array of beautiful long rifles in our upcoming auction is a fine, silver inlaid rifle built by Simon Lauck. He and his brother Peter both fought with Morgan’s Provisional Rifle Corps and were gunsmiths in Winchester, Virginia after the war. It is a classic example of a rifle built during the Kentucky rifle’s Golden Age. Rifles from this era are favored by collectors due to the unique nature of each rifle and the variety of regional variations. Aside from a few makers who preferred to focus on perfecting the nuances of their designs like John Armstrong, most used many variations of styles taught to them while apprenticed to a master. They in turn passed on their own variations on to the next generation of apprentices. This led to what we now think of as the “schools” based roughly in Lehigh Valley, Lancaster, York, Lebanon, Chambersburg, and may other locales based on shared attributes and lineages.

Gunmakers were influenced by one another especially in specific areas but also adapted art forms from Europe. The carving and patch boxes, for instance, follow European trends in terms of rococo and baroque scrolls. Note the incredible variety in patch box designs on these rifles and all the little details in carving, inlays, and little components. While there were tremendous variations, also note the consistencies such as the fixed blade and notch sights and the beautiful, full length, curly maple stocks.

One area of variation among individual rifles is the variety of inlays. Many included patriotic motifs such as eagles and some contain important, but largely long forgotten, revolutionary era symbols. Such is the case with the rare rattlesnake designs on the Jacob Dickert and George Schreyer rifles. Like the long rifle itself, the use of the rattlesnake as a symbol of the American ethos well pre-dates the idea of a separate American nation. In fact, one of the first known uses of the symbol was in Benjamin Franklin’s famous “Join or Die” cartoon from 1754 calling upon the colonies to unite, with the support of Great Britain, to defeat the French in the Seven Years War (French and Indian War), a conflict started in part by a young British officer by the name of George Washington. Franklin’s cartoon came to represent the need for unity among the colonies in the American Revolution as well. Rattlesnakes are only found in the Americas and were numerous in many parts of the colonies. Though they do not attack unprovoked, rattlesnakes defend themselves with deadly force when they need to defend themselves. This was the image the Founding Fathers wanted to present to the world in Jefferson’s Declaration of Independence. Americans were not breaking from England needlessly; they were defending themselves against attacks on their lives and freedoms. Rattlesnakes also had another attribute that 18th century Americans knew well. As “American Guesser” wrote in 1775:

‘Tis curious and amazing to observe how distinct and independent of each other the rattles of this animal are, and yet how firmly they are united together, so as never to be separated but by breaking them to pieces. One of those rattles singly, is incapable of producing sound, but the ringing of thirteen together, is sufficient to alarm the boldest man living.”

Though this symbol was very important in the colonial era and for the young American republic, very few rifles have been found that incorporate the design, especially as boldly as these two examples by Dickert and Schreyer. The snake patch box designs of course relate to the Gadsden Flag and First Navy Jack used during the war, and Dickert’s is also similar to the design utilized on early Virginia Manufactory rifles. 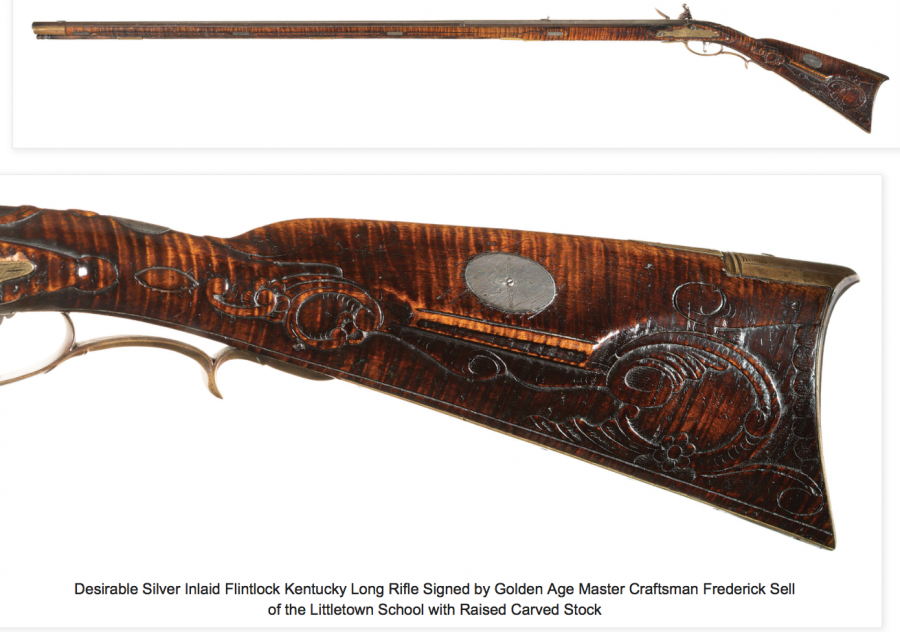 The Frederick Sell rifle is another good example of the paradox of both unity in overall design through the use of consistent motifs and basic configurations and yet the individuality of the combination of carving and engraving on each rifle. Sell was considered by influential Kentucky rifle scholar Joe Kindig, Jr. as “one of the great masters of Kentucky rifle making” and was part of one of the most influential gunsmithing families during the Golden Age. His greatness comes from the fact that he developed his tremendous skill set while working underneath at least three earlier accomplished masters: George Eister, John Lechner, and Adam Ernst. His presumed father, Jacob Sell, was among the most talented makers of the prior generation, and Frederick’s brother who was also named Jacob (often referred to as Jacob the Younger) was also a gifted maker in his own right.  Sell adopted the best aspects of the designs of each of the men under whom he worked. Thus, he created his own style and his own variations while keeping his designs tied to the past and reflected the American ideal of balancing community with individualism. Peter White is also a great example of someone that was part of a family line of gunmakers that pre-dates the United States and continued well after our independence was secured by victory in the War of 1812. He is the son of either Nicholas or John White who were both gunsmiths during the fight for independence, and at least one of his sons continued to build rifles after his death in 1834. One of the interesting aspects of White’s rifle is that the lock appears to have been built by him. Most gunmakers used locks imported from Europe or produced by dedicated lockmakers in the cities. This rifle is also noticeably slender relative to others of the style and era.

By the time of White’s death, the long rifle and the flintlock system had peaked and were beginning to be replaced by shorter, larger bore rifles. The percussion system and the spread of industry also helped shift firearms production away from individually built masterpieces. The Hawken brothers’ “Plains” or “Mountain” rifle style relatively quickly became the preferred design as the frontier pushed ever further past the Mississippi. Nonetheless, the long rifle persisted, and its legacy continued to influence American firearms for generations. In fact, long rifles have been in essentially continuous production by American gunmakers from the early 18th century into the present day. One look at the Contemporary Long Rifle Association is all it takes to attest the fact that the art of building the first truly American firearm by hand is still alive and will be for generations to come. 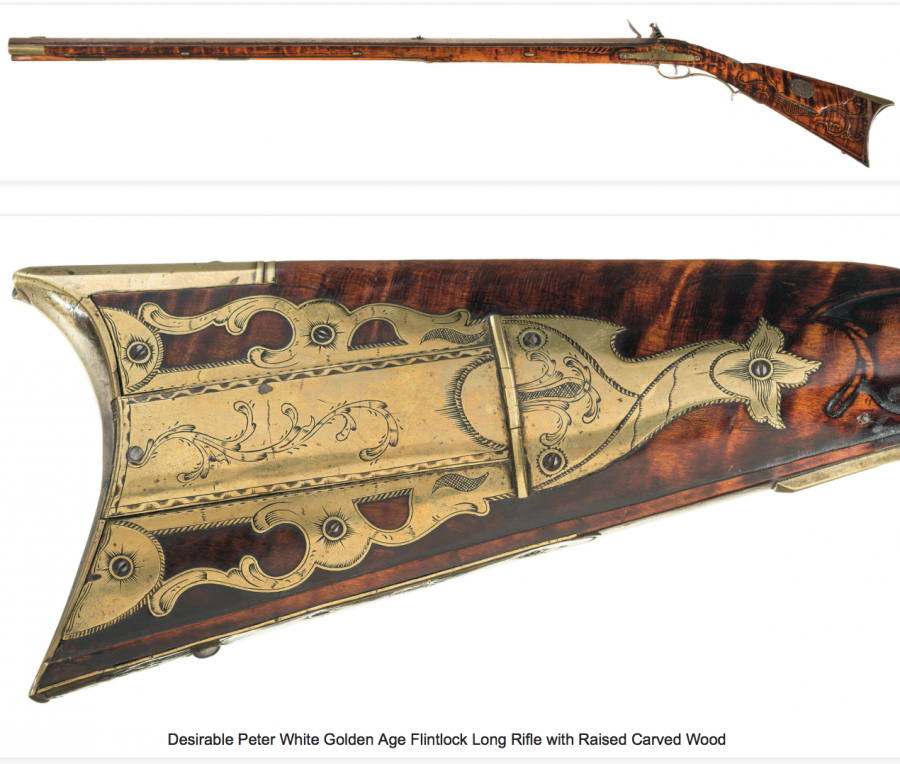 This discussion has hardly scratched the surface of all of the beautiful rifles in our upcoming auction. For more information see AmericanLongrifles.org, KentuckyRifleAssociation.org, KentuckyRifleFoundation.org, or the many detailed books including Joe Kindig, Jr.’s classic Thoughts on The Kentucky Rifle in It’s Golden Age and Merrill Lindsay’s The Kentucky Rifle both of which contain pictures and discussions of several of the rifles in the upcoming auction. Do not miss your opportunity to see these rifles first hand and please join us for our Premiere Firearms Auction December 4th, 5th, and 6th.