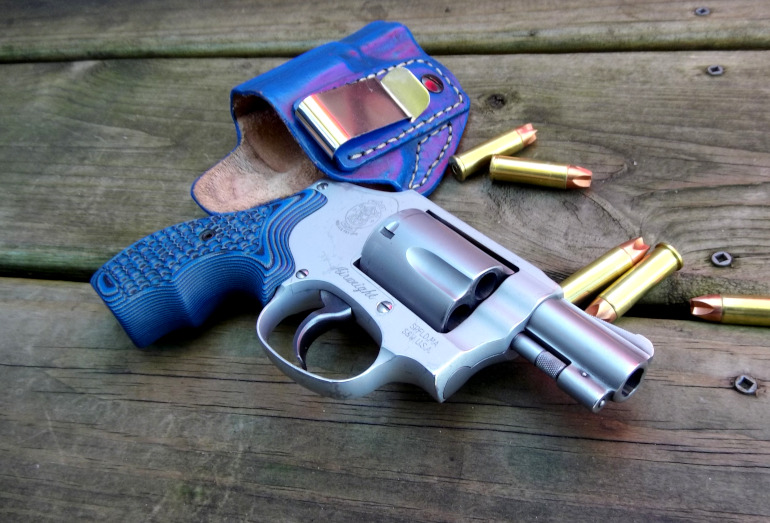 Handgun service life is something that’s often misunderstood. A handgun is, like any tool, just a man-made object that has moving parts. While not as simple as an inclined plane, handguns are relatively easy to grasp. In this article we will be looking at what service life is and what it means to the average shooter.

For the purposes of this article we will be looking at a couple different ideas about service life. The first thing we’re going to look at is normal carry wear. The common carry gun is a friend that spends most of its life in a pocket or a holster and sleeps in the nightstand. It will typically be cared for years, but isn’t often pretty or nice to look at. Most carry guns that are well used have what we creatively call ‘carry wear’.

Wear is a natural part of handling any object. Any concealed carry gun that is in constant contact with holsters, body oil and sweat, natural humidity, and powder residue will inevitably begin to deteriorate. The act of firing is also hard on guns. Every shot taken and every time the slide is pulled results in microscopic wear.

Cleaning is another hazardous time for a firearm. Aggressive cleaning methods are responsible for more gun wear than almost any other activity they are used for. Even if a gun is well maintained, it will still wear on some level, even if it is just the surface finishes.

Cosmetic wear is extremely common. This results from constant holstering and drawing, rubbing against clothing and belts, being dropped or dragged, and just plain being around. Cosmetic wear is usually just on the surface, but it is a big deal to some people, even in their self-defense gun. I’ve heard it time and again that ‘the finish goes, the gun goes’, but this is folly.

I once owned a GLOCK 19 that was almost silver from use and carry. It went everywhere with me and looked like trash, but it worked every time. I do not see cosmetic wear as a real issue when it comes to service life. Just like a cordless drill, my carry gun is a tool with a job. As long as it functions, it gets to hang around.

Malfunctions in an otherwise reliable gun are an indicator that some parts are on their way out the door. Most problems with a gun can be solved by replacing parts like a firing pin or recoil spring. It isn’t common that the whole gun crap the bed at once unless you actually blow it up somehow. Accuracy and reliability go first in an aging gun, but these issues can usually be solved by replacing a few springs or replacing the barrel.

For many people, a semi-automatic gun just isn’t worth the repairs. A GLOCK 19 can be found today for about $400 used. If you pay full price for a Gen 5 G19, you’re looking at about $550 depending on where you buy it. The semi-automatic G19 will easily last 30,000 rounds without touching a thing on it.

Even then, all you’ll probably have to do is change the recoil spring, which takes about two seconds. The barrel is not likely to lose accuracy much at all during that span of rounds if you use non-abrasive cleaning methods. By the time such a high round count is hit, many people just sell the gun and buy a new one instead of paying parts replacement.

If you balk at a person firing 30,000 rounds, know that number can be reached in just a couple of seasons of shooting for dedicated competition pistol shooters. I asked a number of competition guys I know in my area about their round counts, and most fired about 25,000-50,000 in two seasons of matches and practice. Low end, that’s about 250 rounds a week over two seasons, which isn’t a crazy number.

Even if a person fired 250 rounds a month, they would still be putting 3,000 rounds a year on their gun. Combined with the holster wear and general abuse through regular concealed carry, many people never end up putting 10,000 rounds through a gun before they decide it has reached the end of its service life, despite the fact that most guns will last far beyond that.

My competition friends end up with ‘frankenguns’, which are often the result of a factory gun being slowly taken over by aftermarket parts. As a recoil spring or barrel wears and reaches the end of its service life, they replace it with a competition grade version and so on until they have replaced most of the gun. One guy I knew bought a new frame to replace the old one on his G34 and found that he was able to assemble a complete factory G34 from all the parts he had replaced over time. (In my opinion, he now has the same gun in two locations. I am curious as to what fellow students of metaphysics will have to say in the comments about this one. Look into the ‘Ship of Theseus’ if you’re curious about this.)

A good case of wear and abuse is the story of my Smith & Wesson Model 642. I got the gun new from a local sports store about three years ago and I’ve carried it every day since. I estimate that this gun has seen about 15,000 rounds since I bought it. Most of these were cheap lead reloads that I crank out by the thousand every month or so, but it does regularly see factory +P loads as well.

The finish of the gun went first. The even grey color wore off in most places. The edges on the gun are highly polished from my pockets, backpack, holster, and general handling. The springs have never been replaced, nor has any part except the grips, but those were installed almost from day one. I have noticed that the gun’s accuracy has not changed in all this time. It still shoots like it did out of the box, but the trigger is noticeably smoother than a factory-new gun.

Despite the fact that it has seen more use and abuse than most pocket snubbies ever do, it is still kicking and is in my pocket as I write this. If I disregard the finish wear, there is nothing at all wrong with the gun mechanically. I may be do for an internal cleaning soon, but that’s about it. I’ve had only two failures to fire in the entire time I’ve spent pulling the trigger on the 642 and they were in reloads. I am very confident that it will go bang when I need it to.

So when would I consider replacing my little blue gun? I don’t know, to be honest. I have not had a problem with it yet and I consider three years/5,000 rounds a year to be too short a time to retire it. But I know guys who have shelved or sold their G43 (or Sig Sauer or Beretta or Ruger or Remington) after only two years of what I consider light use and bought new pistols. While they may tire out a spring, I believe it to be safe to say that most people will never successfully wear a handgun out. It is my opinion that most people simply tire of their handguns and want something new, thus ending a particular gun’s service life.