Today is the fifth anniversary of the Sandy Hook Elementary School shooting, a signal event in America’s relationship with firearms and the right to keep and bear arms. That unimaginably horrific crime was both the result and cause of many failures. It happened because of failures of complacency, of security, of law enforcement and, maybe most of all, failures of parenting. And the massacre of 26 students and teachers touched off innumerable follow-on failures of hubris, of conceit, of self-importance and of political pomposity.

But one thing that didn’t fail — a factor that no reasonable observer can blame for what happened that day in Newtown — was the nation’s gun control laws. Connecticut already had one of the strictest gun control regimes in the nation prior to Sandy Hook. The rifle Adam Lanza used was purchased, legally, by his mother in full compliance with all of the applicable laws from a federally licensed dealer after undergoing the Brady Bill’s background checks as required by law.

What the Brady Bill’s drafters couldn’t foresee — what no gun control law will ever be able to proscribe or prevent — was a severely mentally disturbed, long-neglected, basement-dwelling shut-in stealing his mother’s rifle, shooting her in the head and then committing mass murder in a neighborhood grade school.

Not that any of that will prevent those who push for Second Amendment restrictions from using the example of Sandy Hook as an opportunity to call for further limitations and constraints on Americans’ gun rights. It’s just too juicy an opportunity — to both tug at heartstrings and tsk-tsk at the supposedly ineluctable power of the “gun lobby” — for the Civilian Disarmament Industrial Complex and their complicit media cheerleaders to ignore. Here are just a few examples: 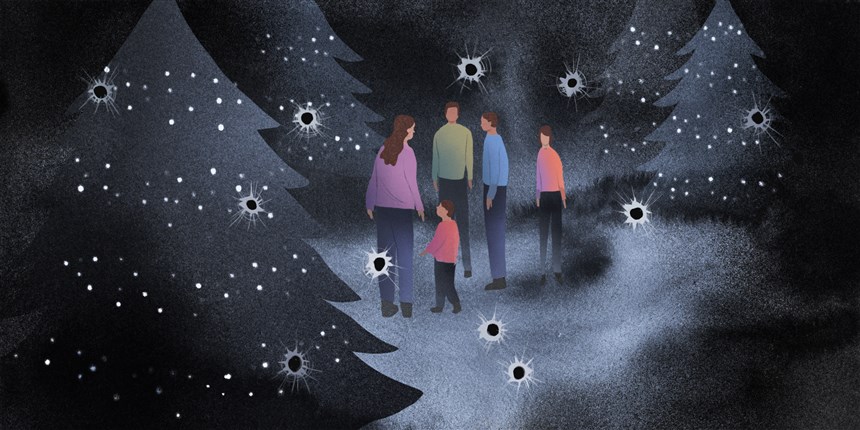 Five years after my sister died at Sandy Hook, the gun lobby is working to make us less safe

I’ve become intimately aware of our nation’s gun laws. I’ve met other survivors of gun violence as part of the Everytown Survivor Network and shared my story with members of Congress, urging them to take action to close the gaping loopholes in our nation’s gun laws. I remember the disappointment and outrage when legislation in Congress to close the background check loophole failed to become law in 2013. But I’ve learned that change happens over time and since 2012, a groundswell of Americans has gotten more engaged in the fight for gun safety.

Still, it’s astonishing to me to learn that last week — just days before we mark five years since the day Vicki was shot and killed in her classroom — gun lobby-backed members of in the House voted in favor of legislation that would gut our states’ gun laws. The gun lobby’s number one priority — known as “concealed carry reciprocity” — would override the standards that states have set for who can carry hidden, loaded guns in public. It would put all of our communities at risk — forcing each state to accept the concealed carry standards of every other state, letting people with dangerous histories, no training or even no concealed carry permits to carry concealed handguns across the country. The Oklahoma chapter of Moms Demand Action for Gun Sense in America gathered Wednesday night to remember those killed in the Sandy Hook massacre five years ago.

The event, held at the Charles Schusterman Jewish Community Center, is one of more than 200 events taking place across the country.

In the five years since Sandy Hook, Moms Demand Action volunteers — along with survivors of gun violence and other gun violence prevention advocates — have fought to change America’s gun laws.

“Twenty children and six staff members were going to bed early so they could get up early and get to school but they didn’t know it would be there last time to go to school,” said Allison Ikley-Freeman, Oklahoma Senator-Elect for District 37. 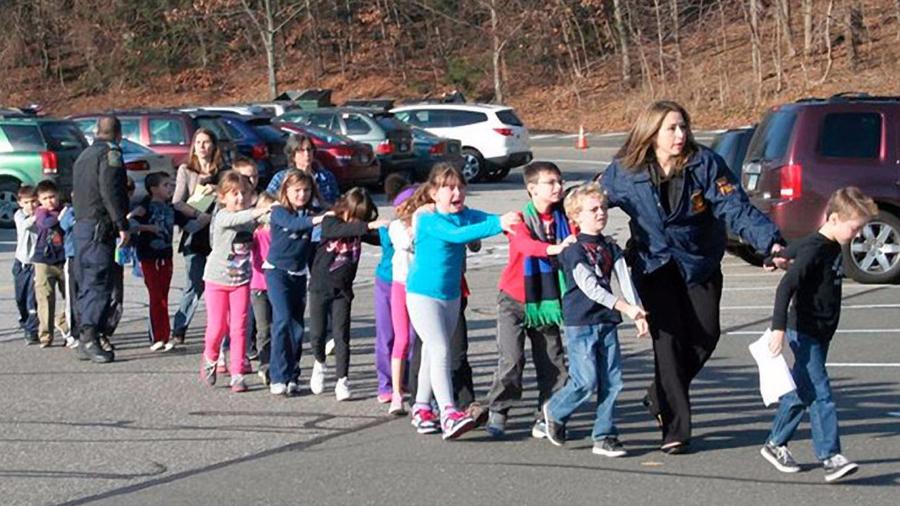 The line between increased gun sales and accidental shootings is by no means a direct one. But the research strongly suggests that the behavior of gun owners and gun buyers in the wake of the Sandy Hook shooting contributed to a rise in accidental gun deaths.

The study’s authors — health economists from Wellesley College and from the National Bureau of Economic Research in Massachusetts — used several measures to gauge Americans’ increased “gun exposure” in the wake of Sandy Hook.

They saw a spike in presumptive gun sales, gleaned from a spike in the background checks required for most sales. They also tallied increases in Google searches about gun-buying and gun-cleaning. That’s evidence, they suggest, that gun owners were bringing existing guns out of storage and that both established and prospective gun owners were preparing to bring a new firearm into the home. 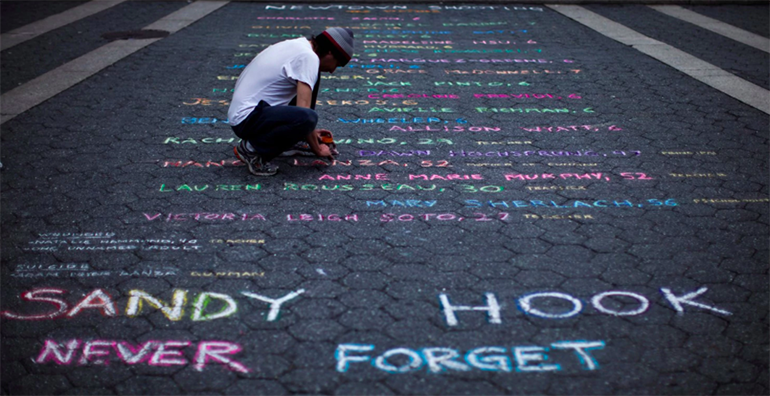 Sandy Hook was five years ago. Congress has still done nothing.

Sandy Hook, at the time, was the country’s second-deadliest mass shooting in modern history. It was seen as a defining event that would finally lead to some sensible gun control. But not even the horror of elementary school children being slaughtered was sufficient to get action from a Congress in the thrall of the National Rifle Association. A ban on assault weapons was defeated, and Republican lawmakers blocked even modest legislation to improve background checks.

Five years later — after a series of mass shootings (including two deadlier than Sandy Hook) — that failure continues, and the gun lobby has become more emboldened. Witness the House’s passage of legislation allowing people, including those with dangerous backgrounds, to carry concealed guns across state lines. Newtown Is ‘Still So Raw,’ 5 Years After Sandy Hook Shooting

The shooting punctured the sense of security that blanketed Newtown, a quiet and bucolic New England community, and stunned a country that could not comprehend an act as depraved as mowing down 6- and 7-year-old children. That day, an emotional President Barack Obama dabbed his eyes as he addressed the nation.

The shock waves have, by now, faded to something more subtle. Yet they still ripple through the town, stirring concentric circles of anguish, leaving people with varying degrees of pain and differing sets of struggles. The victims’ relatives are at the core. Beyond them are the teachers and students who witnessed the carnage and chaos that day; the police officers, emergency workers and doctors who responded to it; and then an entire community.

“It’s almost impossible to ask the question, ‘How is the town doing?’ It depends entirely on who you ask,” said David Wheeler, whose 6-year-old son, Benjamin, was killed. “One of the things an event like this does — it doesn’t change you, it simply heightens who you already are. There are beautiful, meaningful, thoughtful and very kind gestures at every turn, from people you know well and people you don’t know at all.” Over the course of the past five years, (Connecticut Senator Chris) Murphy has been outspoken in his calls for gun safety. In the last 12 months alone, he has sponsored one piece of federal legislation and co-sponsored nine other bills related to guns.

But federal legislation is not where gun control advocates have seen the most success. He pointed to state-level laws, electing politicians who support tightened gun laws, and ballot referendums as meaningful ways that changes have been made.

Referendums and ballot initiatives were what led to major changes in certain states, with all but one gun regulation-related measure passing. After the tragedy at Sandy Hook Elementary five years ago today, the one thing I thought nobody would be fighting about was a common-sense solution to gun violence. I wondered then if my own sons would be safe in their schools as they grew up in a country in love with guns. Surely, I thought, this tragedy has to result in some reasonable new laws to prevent further senseless mass shootings.

How wrong I was. In April of 2013, four months after the Newtown shooting that claimed the lives of 20 children and 6 adults, the U.S. Senate rejected a bill to expand background checks on firearms sales. Most Americans supported this bill. It didn’t matter. Ashley (Cech’s) plan of becoming a language teacher was put on hold and she turned her attention to gun safety. “This issue became incredibly urgent for me and I knew that I needed to focus my energy on being a part of the solution of ending gun violence in America.” Ashley now works with Everytown for Gun Safety, the largest gun violence prevention organisation in the country.

Yvonne worries about her, as a mother, working such an intense job, but describes her daughter’s “unbelievable passion”.

“She is approaching it from a very intellectual point of view and she’s very supportive of people’s rights,” Yvonne says. “I am very, very proud of Ashley”.

The family have become single issue voters now, Ashley says. If a candidate doesn’t have a strong stance on gun violence prevention, “they don’t get our vote”.