I see a lot of products. Some of them suck. Most of them are a solid “meh.” Very few of these “revolutionary products” are as valuable as their inventors think they are. Alas, I’m a bit jaded. At the very least, extremely skeptical. It is with this attitude that I first approached Ryker USA’s FIST Grip. If you share this dubious approach to firearms “innovations,” you’ll scan and re-scan every bit of this article. Please do. For the rest of you, I’ll save you some time . . .

The FIST grip works. But before I explain how it works, a little history . . . Ron Holmes (above) is a 20-year Marine veteran who served with Force Recon and Marine Special Operations. Ron developed the FIST Grip to combat the wear and tear on his body inflicted by training and deployment. After he had elbows rebuilt, he found that wearing his full kit on the firing line made his support arm tingle and go numb.

[I know how that feels. I remember wearing my complete combat load, 65 lbs. (without my 40 lbs. aide bag), spending days doing drills or on the range. I was beat, my left shoulder would ache, hurting all the way down to my fingertips. It didn’t get better as I got older.]

Generally speaking, it’s tiring holding a rifle up for a long time. Ron designed the FAST Grip to reduce that challenge for our fighting men and women and, of course, you. The FIST Grip is a polymer forward grip that attaches to any rifle or shotgun rail section, on the side, vertically. The grip portion is not a straight stick, or a triangle hand stop. It’s an oblong shaped knobbish kind of thing that fits in your hand. It doesn’t sit flush with the rail, it stands proud a few inches.

The end result: your supporting hand reaches much more straight forward from your shoulder, making a vertical fist. It’s exactly like having a good, two-handed high grip on a pistol. Your support hand is farther forward of your firing hand, and to the side a bit. The first firearm I fitted was the FIST Grip: the new Smith and Wesson M&P15 with Crimson Trace and LinQ (review pending). I shot the simple standing Mozambique drills in normal day clothes at the 25 and 50 yard mark, both with and without the FIST grip.

The timer revealed a small advantage with the FIST Grip installed. A four percent improvement over the overage of 50 rounds. Then I started shooting targets both walking forward and horizontally (two targets, four-round strings). The time advantage grew slightly. For the next 200 rounds I shot 15 rounds strings while moving and shooting at different targets.

I didn’t feel any difference in the recoil. If you’d have asked me if there was any time savings with the FIST Grip, I would’ve said no. But the timer told the tale. The strings shot with the FIST Grip in situ were 11 percent faster. If the game is life and death, 11 percent is non-trivial. 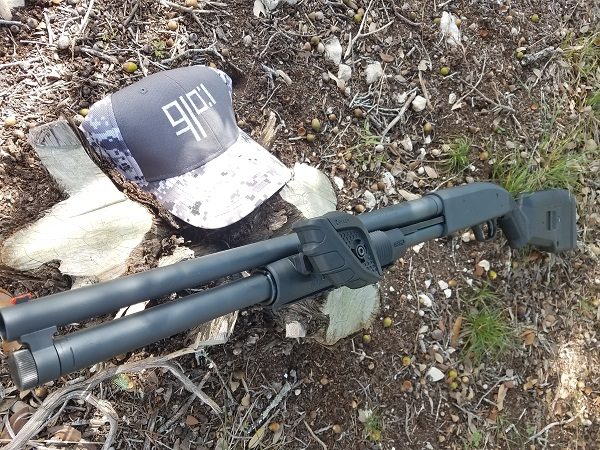 The next day,  I did the exact same drill with S&W M&P10 in .308 (review also pending). The advantage grew to 17 percent. The heavier the recoil, the faster I shot the gun. So I mounted the FIST Grip to the rail section on the side of my Mossberg 500s 12 gauge shotguns.

Mounting the FIST Grip to the pump action itself made racking the gun quicker than racking the Mossie using normal under-the-barrel-hold. You rack the shotgun like making little rabbit punches forward and back. It’s crazy fast. So the FIST Grip enables faster shooting and shotgun administration. But that wasn’t its primary purpose.

When a soldier wears Interceptor Body Armor (IBA) or Improved Outer Tactical Vest (IOTV) he has to use his shoulder to push the armor out of the way, to get their support hand over the rifle’s handguard. That’s why you see a lot of soldiers holding the gun at the magazine well; they can’t reach out to the rifle and still square up on the target to move forward, or at least not for long.

So I donned my IBA and full IOTV and put a FIST-equipped shotgun to the test. It worked as advertised. Not having to fight my gear kept me in a better firing position, more mobile, and less tired. On a long course, I saw anywhere from a 30 to 45 percent increase in my total speed during the string of fire. The FIST Grip works. How much it works depends on weapon and armor. Fair enough.But that’s not all that’s important. My first concern was that something at the end of my muzzle sticking out sideways would catch on stuff.

In two weeks of shooting with the FIST Grip installed on multiple platforms, with slings and way too much gear on me, it didn’t catch on anything. Now that I think of it, my old forward grip didn’t either through years of use and plenty of combat. The FIST Grip sticks out much less than the forward grip did, so I don’t really see it as a major concern.

My next big concern: reliability. The FIST Grip is light, weighing in at only 3.25oz. Ryker USA tells me that the exact polymer blend is proprietary, but it is “very close to the majority of polymer gun components, and will perform very similarly in feel, strength and durability as a result.”  I pressed it up against a pallet staked into the ground and leaned into it with all my weight and fired off the Mossy one round at a time with it for a full magazine. It didn’t break.  Good enough. 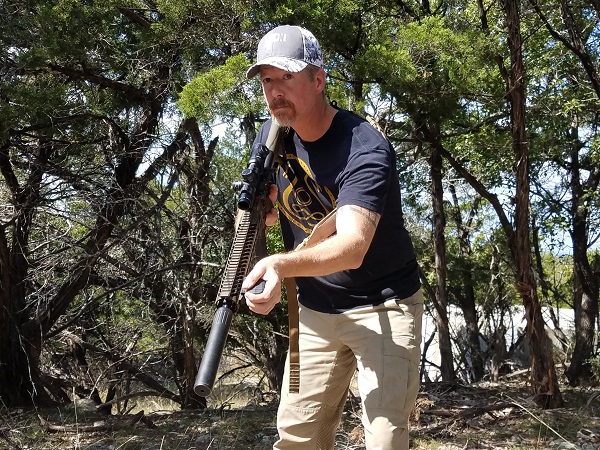 During the long strings of fire with the M&P ARs I found a final benefit: the FIST Grip moves your hand away from the heat of the gas block. (Although I have a few AKs, none of them have any rails on them.)

The FIST Grip looks different. It looks weird. But there’s no doubt that this is one of the rare products that lived up to the hype.

Overall * * * * *
The FIST Grip helped me shoot faster, move easier and tire more slowly.  Its simple design is elegant in function and solves more problems than it was created to fix. It’s a heck of a thing.