I still remember coming of age as a shooter when the polymer revolution happened. I went from shooting K-Frame S&W Revolvers and Beretta Wonder-Nines to those crazy Austrian Polymer Pistols that everyone thought wouldn’t catch on. It really was an interesting time as the polymer gun did, in fact, catch on.

But GLOCK wasn’t the first with a polymer frame and it wasn’t the last.

First up was HK’s Tactical Staple Gun, the VP70Z. I did a whole article on its history already, so I won’t go into extreme detail. But HK beat GLOCK to the punch by a decade with the first commercially available polymer framed striker fired pistol. It was a complete failure on the market. The gun had some great ideas on paper and an overall good design, but it needed to be refined and the biggest and most glaring issue with the VP70Z was the trigger. HK kept it in production until the late 1980s and by then there were far better choices out on the market. Yup, GLOCK might have been beaten by HK. But GLOCK got it right. The gun actually functioned and felt like a gun, not like a 1960s Buck Rogers branded toy blaster. The trigger was far better than anything HK offered at the time and it was affordable.

It was GLOCK that got the polymer frame striker fired gun noticed. GLOCK, through their aggressive advertising and even more aggressive sales tactics with American law Enforcement, secured their market place for twenty years.

The collapse of new pistol development by the enactment of the Clinton Assault Weapons Ban in 1994 sure also helped GLOCK keep that market hold since any new competitor had to rely solely on police and military contracts.

But that didn’t stop an upstart from Croatia from dipping their toes in the US market in 1999. 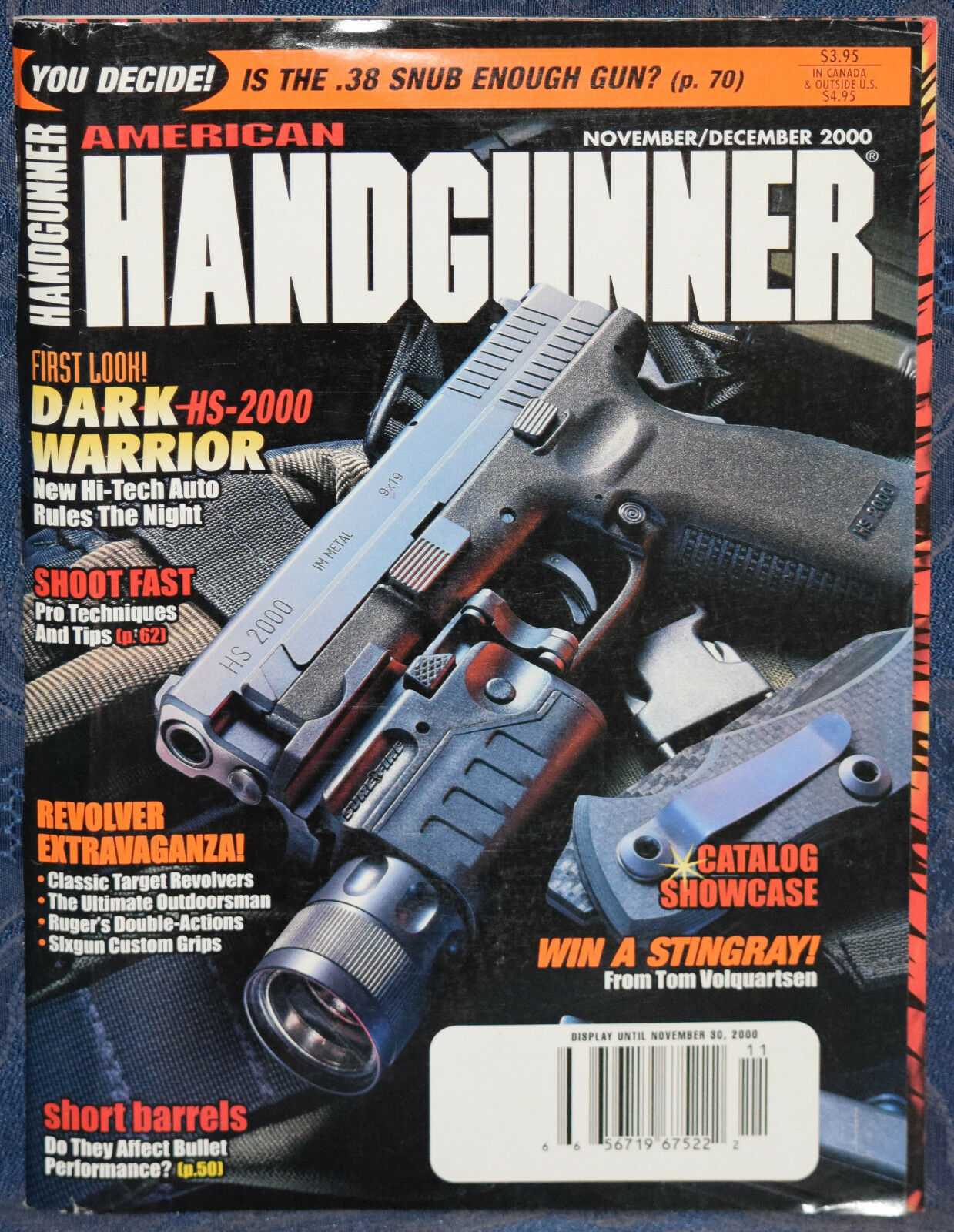 Yes, it was that long ago that what we now know as the Springfield Armory XD originally hit the market. Made by IM Metal (who would later change their name to HS Produkt) and originally sold as the HS2000. This pistol was touted as the “GLOCK killer.” Others tried in the 1990s like S&W with their Sigma, FN with their Forty-Nine, and CZ with their CZ-110, just to name a few.

They all were commercial flops and didn’t secure government contracts. The Sigma was the only one that lingered on since Big Blue was just being crushed in the police market. They were losing market share left and right to GLOCK, HK, SIG, and Beretta.

Anyway, when the HS2000 was introduced to the US in late 1999 it sold well as a sleeper hit. It had one thing going for it that the other guns, except GLOCK, didn’t: it could use pre-ban magazines. The stash of pre-ban 17rd and 15rd mags (available at inflated prices) were a big factor that kept GLOCK popular throughout the AWB, and the HS2000 benefitted from a similar advantage.

In the HS2000’s case, one could purchase the plentiful Beretta 92 magazine, cut a new magazine catch into it, and you had 15rd mags for your post-ban produced pistol.

So enough with the stroll down memory lane, lets get to the guns! When field stripping, the HK is the odd one of this bunch. The GLOCK and HS2000 are similar in takedown, because they’re similar in mechanical function whereas the VP70Z is a clear outlier. The GLOCK and HS2000 shoot from a locked breeched design while the HK is direct blowback.

On ergonomics and grip shape design, you can see the evolution into what would eventually become the industry standard. The magazines for all three guns are well built and reliable. The HK holds 18rds, the GLOCK holds 17rds, and the HS200 holds 15rds with its original magazine. When Springfield Armory got the marketing rights, HS Produkt increased it to 16rds. The sights are different, too. The HK has a fixed front sight while the HS2000 has a drift adjustable front sight. The GLOCK has the standard plastic sights that everyone would ditch for a set of night sights. So with those sights, how are they in terms of accuracy? I did a five shot string with each gun at 25 yards doing a two handed combat hold. I think the targets speak for themselves. Even with the odd front sight and horrible trigger (which I slightly upgraded with a replacement striker spring from Wolff Spring) the HK was capable of minute of bad guy. The HS2000 is factory; I haven’t done a single thing to the gun other than shoot it and clean it. You can see that it shot the tightest group. The GLOCK shot like a GLOCK. Nothing to write about. This gun is bone stock and it is what you’d expect from a GLOCK. Combat accurate for bad guy distances.

So about this GLOCK, it is a new production P80; it isn’t a legit retro original. But it fits the niche for me. I started shooting with a real Gen 1 GLOCK back in the day, but as the newer generations would come out I’d sell my guns and upgrade.

But I’ve had an itch for a Gen 1 or Gen 2 GLOCK, and with the 2020 panic buying the prices on the original used GLOCKs skyrocketed. Luckily for me, one of my usual haunts, Red Hills Arms in Tallahassee, FL had the Lipsey’s exclusive GLOCK P80 in stock. They always have cool stuff, like the Gryojet Rocket Pistol I reviewed.

I figured a brand new Gen 1 pattern GLOCK for under $500 ain’t a bad deal, especially since legit Gen 1 GLOCKs are orbiting close to $1,000 these days. I’m using my original pre-ban mags in it and even still have the original Gen 1 spare parts that I had saved. Like I said, I remember when GLOCK was really the only player with a polymer frame striker fired design. I recall going to Trail Glades Range in Miami, FL and whipping out a Gen 2 GLOCK 17 and pre-ban 17rd mags while other shooters had S&W Model 686s or automatics like 1911s and Ruger P90s.

The idea of having a gun that light in weight with that many rounds on tap was earth shattering. Folks would always ask to shoot the GLOCK and I’d always say yes, of course.

Guns like the HK were oddities. Even with the larger (then average of the time) capacity, the gun was overlooked and it languished on store shelves. Even when HK was blowing them out for cheap. The trigger was always the biggest complaint.

But when the HS2000 hit the scene, it really was the first gun to chip away at GLOCK’s stranglehold on the market. Here you had an affordable pistol that was well made and came with a decent trigger, too. Mags weren’t that much of an issue due to the fact you could easily modify pre-ban Beretta 92 mags for it, which was a big selling point. The darn thing was also under $350 new.

Today, the market has evolved to being predominantly nothing but polymer frame striker fired guns. SIG, HK, FN, Beretta, S&W, Ruger, CZ, Walther, Steyr and many more all make ’em in one flavor or another.

But there really was a time when guns like these were the odd ones.

The three guns shown here are starting to get to where they might be viewed as outdated, even the GLOCK P80. It is a remake of the Gen 1 guns. But you know what, I still carry all three guns for self-defense. Yes, even the tactical staple gun from HK. They’re all capable and like I said, even the HK is minute of bad guy accurate with all of its faults. It’ll do its job if I do mine.

So don’t worry about playing catch up with the neighbors and about what’s the latest tacticool whizbang. If you have something like what I wrote about today, it is still capable and useful.