We’ve covered the “evil incarnate” initial reaction to the National Rifle Association’s (NRA) post-Sandy Hook slaughter press conference. To say that NRA Veep Wayne LaPierre’s suggestion of armed guards in every U.S. school has been received less than enthusiastically by the left-leaning media would be like saying that Gal Erez looks good with a rifle. My inbox is over-flowing with links to commentary ranging from antagonistic to personally threatening. And “news” stories suffused with opposition to “guns in schools” that somehow always end with a negative quote. Here’s a sampling of the coverage . . . “This vision, straight out of the Wild West, is farcical. There are 132,000 elementary and secondary schools and 6,700 colleges in the nation to protect. Despite the NRA’s promise to train a volunteer militia, its members won’t have the judgment of police in making split-second decisions about when to shoot or back off. The NRA’s solution would probably result in more students killed in accidental shootings.” – The NRA’s extremist fantasy [via bostonglobe.com] “To stop determined shooters from killing children anywhere, Dodge said, ‘we’d have to put fences up around our school parking lots, and we’d probably have to do the same around shopping malls and parks and everywhere kids go.’

That is not necessarily a bad idea, said Quinn of the school police officers’ association, who suggested there should be more police everywhere children congregate. ‘The way things are going now, it sure as heck couldn’t hurt,’ he said.

But Dodge argued for a different path — one that looks at school safety as a consequence of the larger problems with violence in America. ‘Isn’t it more straightforward to just get rid of the guns?'” – Arming Teachers, School Cops Could Cause More Harm Than Good, Experts Say [via huffingtonpost.com] “‘Is this the answer? That America should become an armed camp?’ said Feinstein, who is sponsoring legislation to reinstate a ban on assault weapons. ‘I don’t think so, and I don’t think that’s the American dream.’

Sen. Richard Blumenthal, D-Conn., said if the NRA wants to be part of the national conversation about gun violence, it’s not doing itself any favors. ‘The NRA today in its approach will be irrelevant,’ he said, ‘because it can’t be a credible and constructive participant in this debate if it says the only acceptable solution is armed guards in schools.'” Democrats Slam NRA’s Response To School Shooting [via npr.org] 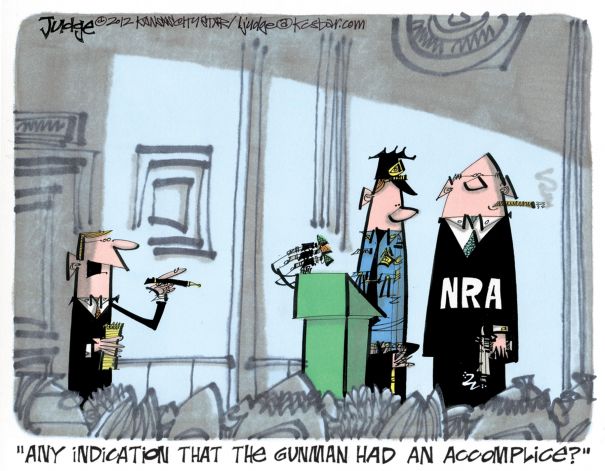 “Ernest Logan, president of the Council of School Supervisors and Administrators, called the N.R.A.’s plan ‘unbelievable and cynical.’

He said placing armed guards within schools would ‘expose our children to far greater risk from gun violence than the very small risk they now face.’ Officials in some districts that use armed security officers stressed that it was only part of a broader strategy aimed at reducing the risk of violence.

But Ben Kiser, superintendent of schools in Gloucester County, Va., where the district already has four police officers assigned to patrol schools, said it was just as important to provide mental health services to help struggling children and families.

‘What I’m afraid of,’ said Mr. Kiser, who is also president of the Virginia Association of School Superintendents, ‘is that we’re often quick to find that one perceived panacea and that’s where we spend our focus.’

In Newtown, Conn., the N.R.A.’s call for arming school guards generated considerable debate among parents and residents on Friday — much of it negative. Suzy DeYoung, a parenting coach who has one child in the local school system, said she thought many parents in town and around the country would object to bringing more guns onto school campuses.” N.R.A. Envisions ‘a Good Guy With a Gun’ in Every School [via nytimes.com] 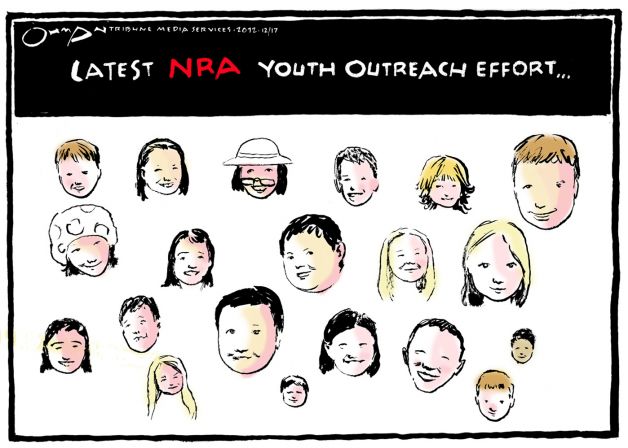 “The growing outrage against the organization extends beyond school officials — even state Republican politicians are weary of eliminating school gun-free zones. Senate Minority Leader John McKinney (R), whose district includes Sandy Hook Elementary School, called the proposal ‘ill-timed.’ ‘I also don’t think his idea of undoing or repealing gun-free school zones is a good idea at all,’ he said. ‘I’ve always understood, and believe, that our Second Amendment is an integral part of our Constitution, and people should have the right to bear arms … but I think we should have a fair conversation in this country about what the limits to those rights are.’

Schools across the state are enacting greater security measures, but more guns aren’t on the agenda. Instead, districts are focusing on adding interior classroom door locks, expanding swipe-card access and requiring staff to wear photo identification.

Tom Moore, assistant superintendent for administration for West Hartford schools, told the Hartford Courant that his district ‘won’t be taking our advice on how to keep kids safe from the president of the NRA.’ He added, ‘I come from a family of hunters; I have four brothers who are hunters and members of the NRA. All I’ll be asking for for Christmas, after hearing Wayne LaPierre essentially blame school officials for the shootings, is for [my brothers] to resign from the NRA.'” Connecticut School Officials Blast NRA’s Reaction To Newtown [via thinkprogress.org]