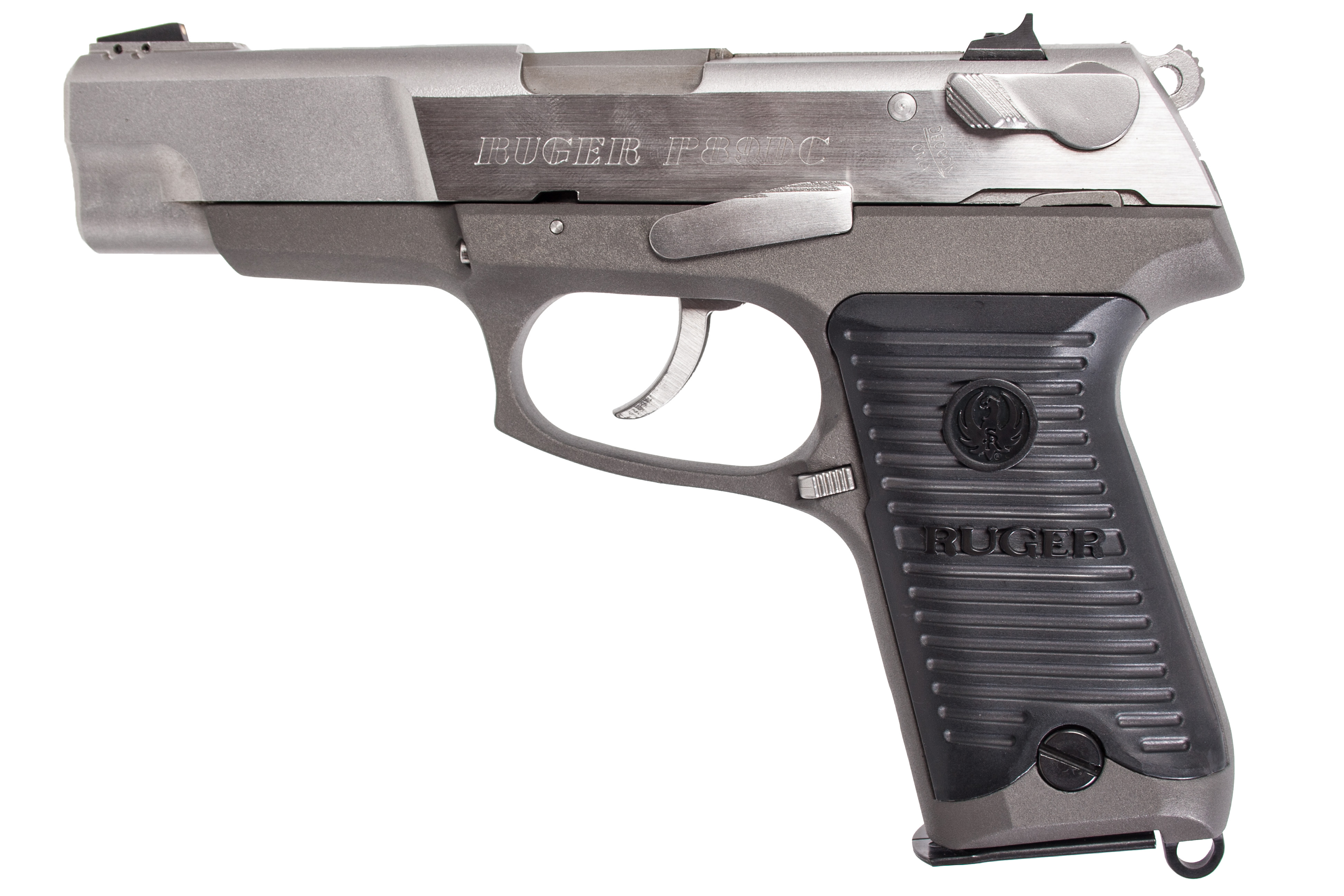 Surely designed to withstand doomsday, the exterior of the store is blood red cinder blocks. The windows are barred and it’s located just on the other side of the tracks from our sleepy, happy town.

In bright yellow paint, “Don’t be a Victim” and “Second is our Right” is scribed on the exterior leaving little to imagine just what lies inside. “Not a place you want to bring the family,” reads the only online review I found.

The stale smell of cigarettes welcomes you at the door. A mishmash of metal shelving containing God knows what from the store’s isles, contents having sat untouched so long that a thick layer of dust outlines their positions.

A Macho Man Randy Savage cardboard cutout is superimposed with Obama’s face. The eyes are painted red with devil horns. “I Sux” is in written in the duct-taped speech bubble that’s attached. The effigy blocks the main isle, forcing one to wander around before entering the heart of this beast.

An impressive collection of half empty plastic soda bottles intermixed with remnants of spent chewing tobacco adorn the countertops and all spaces originally designed for office equipment or supplies. This is Ol’ Pappy’s Pawn and Gun.

An Ol’ Pappy’s employee, semi-auto pistol strapped to his hip, takes a long inventory of his rifle-placing handiwork as he blatantly ignores my arrival. Moving up and down the row, he slightly adjusts each gun’s barrel to the left or right, perfecting this long barreled gun sanctuary.

The glass pistol display case sits in front of the rifle wall, the top almost opaque from years of nicotine. It contains a hodgepodge of handguns organized by what I can only guess to be luck.

I try not to make eye contact with the gruff long-haired fellow behind the case while doing my best impersonation of a regular.

In all honesty, I’m not a typical gun enthusiast. I voted for Obama both times. I’ll choose vegetarian quesadillas over a steak dinner and I like my beer locally brewed and served in the appropriate glassware.

As I scan the display counter, I quickly spot an opening next to a customer who is intently taking aim at various points throughout the store with a snub-nose revolver and I step in beside. Squinting hard through the foggy glass, I get my first look at the goods inside.

“What-er-ya out for?” the gruff long haired fellow slides over and barks at me, obviously trying his best to seem inviting and interested.

“Don’t you usually ask what are you in for?” I reply, head down hoping he would pick up on the prison joke and break the ice. I felt his stare before he replied a stern “no” creating a wall of tension all of the bowie knifes in the place could not cut.

“Umm. I’m just checking out what you guys have. Interested in a XD 9mm…have one?” I mutter, finally lifting my head to make eye contact. In my countless hours of online research, I had decided that was the pistol for me.

“No,” he says immediately, turning to walk down to the other end of the display to help another customer.

Phased and shaken, but not completely deterred, I stick my hands in my pockets and bend down to get a better look at their inventory. Black, gray, blue, pink…every color is represented. Revolvers next to striker-fired, next to guns with hammers.

As I carefully scan the case, I start to wonder how it came to be that each particular gun is now here. Where did these guns come from? How far have they travelled? What is their story? How many are family heirlooms pawned in times of hardship?

Contemplating the pistols’ origins, one catches my eye. It’s stainless steel with a full-size alloy frame and a hammer. A paper tag stringed to the trigger guard states, ‘$299 – Comes with box and 2 mags.’ I try to look past it, but am consumed by the gun’s presence. All other pistols in the case disappear.

Enamored, I stand up straight and look for the gruff, long-haired fellow and muster, “HEY… I’d like to check this one out.”

I think that’s what you should say. Or do I take a number and wait? The gruff long-haired fellow at the end of the counter perks up and is now headed my way, leaving his other customer mid-sentence.

“Oh, the P right there?” he inquires. Pulling a deluge of keys from his pocket, he instantly fingers the correct one, unlocks the back of the case and pulls the gun from its temporary glass holding cell.

“This is a great piece and ain’t gonna last long here.” He cycles the slide a few times and locks it back. Handing it over to me without emotion, a stone cold stare.

Now I can count the number of times I’ve handled a gun on one hand. Spending countless hours online reading everything every pro and vet has to say on what caliber is best for the beginner, the best gun for my money, stopping power and so on made me believe I was a true gun pro. But when push comes to shove, I’m helpless. This is new ground, a new frontier and I am diving in head first.

I take the pistol from him like a new parent taking their newborn from the doctor for the first time. Scared and unsure, I hold the cold piece of steel in my hands, admiring the raw power it exudes, pretending to know what I’m looking for or at.

It seems like what a gun should be. Heavy, made of metal, with a trigger, a barrel and someplace to hold on. Without cycling the slide, checking the sights, internals or gripping it like it was hot, I offer the gun back to the gruff long-haired fellow behind the counter, still cradling it like a newborn baby.

“Cool, thanks.” I say. Nervous, I could feel myself starting to break a sweat.

“You know, this ain’t gonna last in here,” he says, yet again, looking at me and cycling the slide, outwardly confused about my interaction with the pistol.

“These P’s are pretty sought after and in this condition, you just ain’t gonna find another like this.” He places the pistol on top of the case and shrugs off the awkwardness of the situation I just created.

Now I’m running on full auto-pilot, just pure emotion and adrenaline. Without a thought I put my hands back in my pockets and bend back down to take another gander at the inventory behind the foggy glass, not looking at anything in particular, not really sure what I am doing.

I calculate what my next move should be. Run out the door? Inquire about purchasing? Look at a few more guns?

Finally, I make my move. Quickly coming to a full attention, locking eyes with this gruff long-haired pawn shop denizen used gun salesman, I state with authority, “I’ll take it.”

Wait, what? I just said I’ll take it. What caliber is it? How does it work? How old is it? Who even makes this thing? Before I fully realize what I just did, he fires back.

“Good choice, you ain’t gonna find another like this,” confirming my decision like a true used article salesman and now wearing a shit-eating smirk.

Returning from a blackout state due to the insane rush of adrenaline, I have a pen in my hand putting my John Hancock on the 4473 form. Passing over driver’s license along with the 4473, the gruff long-haired fellow gathers the documents and stuffs them in between a few of the spit bottles. The he grabs the pistol from the top of the counter.

“NICS gonna be a minute,” he states with his back to me then heads off to the stockroom.

Standing still and in full recovery from the adrenaline debacle gun purchase, eyes glued to the gruff long-haired salesmen, I can see him fiddling in the back and snickering with his cohort. A combination of smoker’s cough, laughs and snorts ensues from the back room.

Breaking my stare, a few gentlemen come wandering from behind the shelves of preowned junk, take a half-assed glance around the main store then quickly file right back out from where they came in.

Looking around again, I notice another customer at the end of the store who is intently stripping down an AK he’s been gawking at since my arrival, pulling tools from the shelves to aid his endeavor. Above him a bright red sign with white lettering reads, “DO NOT FIELD STRIP WEAPONS.”

Suddenly an Ol’ Pappy’s employee taps me on the shoulder, reaching from behind the case.

“The guy helping me out said that Nick was going to be a minute.”

“No shit. My name’s not Nick, it’s Jay-Jay and Ol’ Pappy, he owns this place. Been running it 22 years. He was referring to the background check, it’s called a NICS.” He starts to break a smile

“Let me guess, you ain’t never been around here?” he asks, now full-on giddy.

“No, Jay-Jay. I’ve never been in the store. In fact, this is the first gun I’ve ever purchased,” I say, feeling rather trusting at this point.

“Huh, Ol’ Pappy back there said he got a stranger. Guess that’s you,” he says. “Well, Garrett, background’s good, let me double in with Ol’ Pappy and we’ll get you all squared up.”

Jay-Jay then heads back to the stockroom. A few minutes pass by before both Jay-Jay and Ol’ Pappy appear from the back room, Pappy carrying a black plastic case. They walk right up to me, both with smiles like Christmas morning. Ol’ Pappy puts the case in front of me, turns around and grabs small a red, green and white box and places it beside the black case.

I turn the case to face me and notice the top of the cases is molded with the name “RUGER.” Popping it open, the gun sits neatly inside, one magazine in the pistol now, with the other magazine sitting perfectly in its molded holding spot. Next to it is a factory magazine loader. There’s not a scratch on any of it, and hiding in the top cover is an owner’s manual.

I take the pistol out of the case and have another good look. “Ruger P89DC” is neatly etched into the stainless slide. Flipping the pistol over I notice “9mm x 19” is stamped into the barrel. Well, I’ve got that part figured out. Feeling lucky I look over at Ol’ Pappy and Jay-Jay.

“You know, this is the first gun that I’ve ever purchased or owned.”

“Oh, we know. Ain’t but get a stranger in here about twice a year,” Ol’ Pappy fires right back. Both of them let out a laugh.

“We appreciate not having to do the price dance. Saves us a lot of time,” Jay-Jay pipes in.

“For your commitment to fair pricing standard set forth by this establishment, here’s a half box of plinking ammo to get you started.” Ol’ Pappy takes the pistol from my hands, places it back into the box, takes the tag off the trigger guard and closes the box.

Almost in unison Jay-Jay holds open a plastic, “Thank you for Shopping” bag for Ol’ Pappy to load. Ol’ Pappy places my new pistol and the small green, red and white box of ammo inside. He knots up the bag handles and offers it over to me.