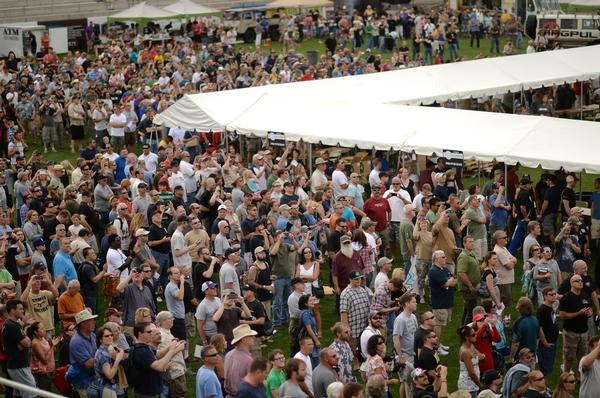 Tonight, the lights go out in Colorado. The state’s shiny new 15-round limit on magazine capacity goes into effect at midnight. That means that Colorado citizens will no longer be able to buy standard capacity magazines for their rifles and handguns. As a final act of defiance before they leave the state, Magpul sponsored a rally in Denver that drew massive crowds in support of the Second Amendment and in opposition to the recently passed laws, with the line to get into the place stretching for a half a mile. Oh, and they gave away free magazines, too . . .

Gun-owners and gun-lovers converged on Infinity Park on Saturday afternoon in a last-minute protest against a new Colorado law banning the sale of magazines of more than 15 rounds.

“You are in the Vatican of liberty, the Luxembourg of freedom,” Glendale Mayor Mike Dunfon told the crowd at the beginning of the rally.

Organizers say some 5,000 people attended the “Farewell to Arms Freedom” festival, which was hosted by Free Colorado, a nonprofit group that advocates for firearms rights.

The first 1,500 people were given a free magazine, and the remainder were sold at a deep discount. The mags arrived part-way through the event via helicopter, which I’m told was quite the spectacle.

The effort to repeal these new laws is already underway in Colorado, with two successful recall efforts already under gun owners’ belts for the most visible gun control advocates in the legislature. But it’s too late to save Magpul from leaving the state, they’ve already set up their new manufacturing facilities and are churning out parts elsewhere.