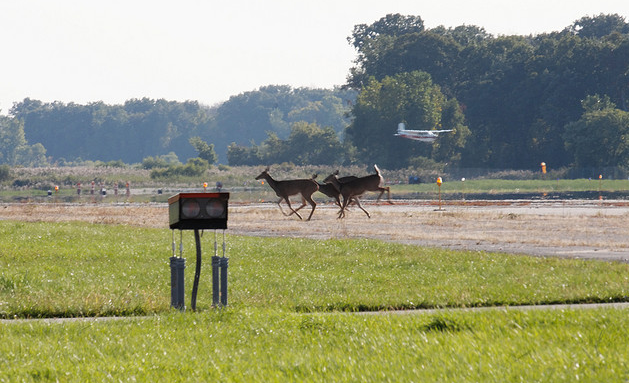 If you think hitting a deer with your car is bad, imagine whacking into something rangiferine in an airplane. True story [via nhregister.com]: “The Sept. 20 deer strike at Tweed [Airport in Connecticut, not shown], in which the deer ended up in at least two pieces some 400 feet apart, according to Tweed’s incident report, was like none of the others. It happened at 2:02 p.m. as a Lear Jet owned by Fox Flight of Toronto, Canada, was taking off on what essentially was a medical transport flight with five people on board. Airport Manager Lori Hoffman-Soares, who was outside with Assistant Airport Manager Diane Jackson, saw the Lear Jet cut power and animal debris fly in the air. She told an investigator she saw another animal running into a wooded area west of the main runway.” And then . . .

The captain, Eoin Teevan, reported that the plane was traveling about 100 knots — about 115 mph — on the main runway when he saw two deer to the right of the aircraft. The pilot moved the plane to the left and slammed on the brakes to try to avoid them. One deer struck and dented the right wing. It also damaged the right main landing gear and landing light, the report said.

The U.S. Department of Agriculture, which has long worked with Tweed staff to reduce threats from birds, has increased its efforts there since the Sept. 20 deer strike, in which the deer was the only casualty. The department is using loud, firework-like explosives to scare critters out of thinking it’s an acceptable habitat, and even using sharpshooters to selectively remove deer from the property, which straddles the New Haven/East Haven line.

Even? Yes, even. Here’s how wtnh.com describes the firearms aspect of the airport’s deer control program: “Federal agriculture officials are going to extraordinary lengths, including the use of shotguns, to get deer off runways at Tweed New Haven Regional Airport.”

I guess the percussion cap gun accompanying the article is the acceptable face of the firearms program. I wonder what shotgun they use to help the Hunters for the Hungry program.