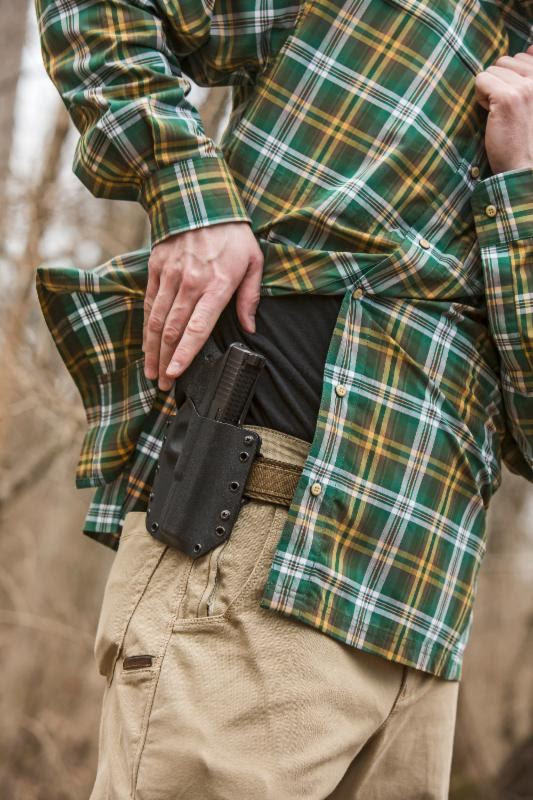 I own a pair of Vertx Phantom pants. Aside from the fact that they’re about as soft as a turtle shell, they’re a GD miracle. The trouser’s panels circulate air through your legs, into your private parts — and beyond! Bottom line: the pants laugh at the Texas summer heat; they’re better even than shorts (which allow the blazing sun onto your skin). But I’m not as enamored with Vertx’s new long sleeved Speed Concealed Carry Shirt.

The way to make those under-the-fake-buttons lower poppers pop during a defensive gun use: wear the shirt untucked, grab the weighted end and rip the shirt open, throwing the tail backwards as you grab the gun. While the in-shirt weight is a definite bonus, it’s still not a done deal — especially if you’re using an inside-the-waistband holster and the shirt’s tucked in (not depicted in the press release image below).

I reckon pulling a standard untucked shirt up with your support hand is just as fast and more secure; you don’t have to worry about the weighted shirt tail returning to base before you secure your firearm. Alternatively, you can hook your thumb under your untucked shirt tail with your gun hand to gain gun access. Which is best performed with a shirt or (even better) T-shirt that’s slightly too large

That’s based on personal, anecdotal evidence. It’s time for a proper test. Meanwhile, the 37.5 Active Particle Technology does keep you dry, as advertised. Cincinnati, Ohio (August 2016) – Vertx, a leader in low profile apparel and gear for the prepared professional, presents its Speed Concealed Carry Shirt with 37.5 Technology, available in both short and long sleeve.

“The Vertx Speed Concealed Carry Shirt was designed with the prepared professional in mind. From the 37.5 infused fabric which keeps your body dry and at its optimal temperature to the concealed carry functionality; this shirt is designed to look great and function when needed,” said Darrell Morrow, Vice President of Vertx. “The details and technology of this shirt truly set it apart from others like it in the market.” The Speed Concealed Carry Shirt allows for a smoother sweep-to-weapon, while maintaining a low profile in large or small crowds.

It features a small inner pocket at the bottom of the shirt that you can weigh down to allow the shirt to sweep away as you reach for your firearm. In addition, it has two eyelet grommets on the hem and placket for adding a rigid item like weed-eater cord to give the shirt a rigid base. A rigid weighted base allows for an even faster and smoother pistol draw.

The Speed Concealed Carry Shirt has faux buttons that actually snap so the wearer no longer has to worry about losing buttons when drawing a weapon. It has a vented back yoke with mesh lining for increased air circulation and keeps the wearer from stretching the back of the shirt out when presenting a firearm. Vertx is a premier tactical and outdoor brand for the modern day prepared professional. Vertx designs world-class apparel, bags and packs that are created by best-in-class designers to combine a low visual profile with superior functionality. Since its inception in 2009, Vertx has earned trust among the nation’s top operators for exceptional performance, fit and durability. Vertx is a brand of Fechheimer, a Berkshire Hathaway Company. For more information, visit www.vertx.com.