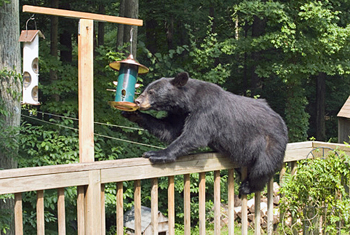 Last week, the New Jersey Fish and Game Council approved a 45-page Black Bear Management Policy, which recommended holding a six-day black bear hunt this December. northjersey.com reports that “It would be the third hunt in seven years.” As we all know, that’s not the end of it. New York’s recent gubernatorial race was run on the basis of each candidate’s position vis a vis Garden State ursine policy, apparently . . .

Actually, given the controversy that any hunt generates in New Jersey, the real power to decide the matter will be wielded by Governor Christie, the Republican who campaigned for election last year promising to support bear hunts.

He defeated Democrat Jon S. Corzine, who thwarted any hunt in his four years in office, not so much on the merits of the matter but simply because he thought it uncivilized. He called for more study of non-lethal management techniques.

Writer James Ahearn is clearly pro-hunt. Here’s his rationale—which is entirely undermined by the headline writer, who places it under the headline “final solution.”

There are 29 states with sufficient numbers of bears to have a policy on managing them. All 29 employ hunting as their chief or sole management tool. All allow shotguns, muzzleloaders and archery.

The Fish and Game Council considers the 2003 and 2005 New Jersey bear hunts to have been successful. The target “harvests” of bears were achieved, 328 bears in 2003 and 298 two years later. No hunters were injured, and there were no incidents of trespassing or other complaints.

Each time, hunters spent an estimated $1 million on equipment, supplies, gas, food and lodging. If a bear permit had been charged by the state, similar to those for deer and turkeys, the state would have collected about $280,000.