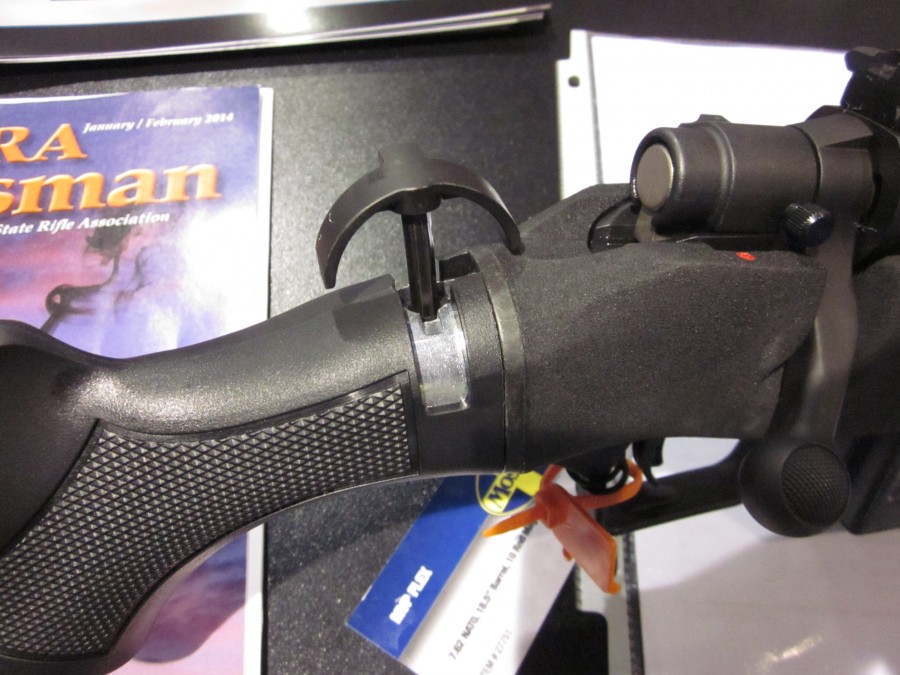 Look closely at the receiver which that FLEX buttstock is (mostly) attached to. That’s not your grandfather’s Mossberg 500: it’s an MVP bolt-action rifle in .308 Winchester. It also takes M-14 mags (which is awesome BTW) but it’s not the only Mossberg model that’s getting the FLEX treatment . . .

Mossberg floated their FLEX modular hardware system about two years ago, and I have to confess that I was initially skeptical. I didn’t think any quick-detach stock mounting system would ever stand up to 12-gauge shotgun recoil without wobbling and creaking and, well, flexing until it drove me mad. After several hundred rounds of testing, I had to conclude that I was I wrong. Way wrong; the FLEX stock setup has been solid as a rock. TTAG’s readers seemed to agree with my conclusion, and chose the 500 FLEX as the Reader’s Choice Shotgun Of The Year. Mossberg has been paying attention to the success of the FLEX system, and now they’re FLEXing just about everything in their catalog.

The ‘Just In Case’ Model 500 comes in an airtight, buryable PVC pipe just like it always did, but its ‘cruiser’ style pistol grip is now FLEXworthy. You can stuff a standard FLEX buttstock into the PVC storage pipe along with the pistol grip and change the gun’s entire philosophy of use. The FLEX system offers so many buttstock lengths and options that it’s an obvious choice for setting up smaller shooters. Our 12-gauge FLEX 500 test gun was easily configured to a weight and pull length that made it fit my petite teenage daughter, but as a responsible parent there was no way I was going to let an 80-pound shooter touch off a lightweight 12-gauge shotgun. If I’d had a 20-gauge FLEX, we would have been out busting clays months ago.

Mossberg read my mind, and the first new FLEX shotgun they showed us was the Model 500 in 20 gauge. It uses the same standard FLEX buttstocks and fore-ends as the 12-gauge version, and the same barrels as any 20-gauge Model 500. It’s a great choice for smaller-statured women as well as for young shooters, because the gun can grow with them. If your young son grows and wants to move up to a 12-gauge, you can buy a 12-gauge FLEX and use your existing stock and fore-end. Most of Mossberg’s MVP lineup of bolt-action centerfires has been FLEXed as well, including the .308 version shown here. Joe tested the 5.56mm MVP Predator about a year ago, and has since used it to send innumerable Oregon ground squirrels and coyotes to the Great High Desert In The Sky. Both Predator and Varmint 5.56 and 7.62 MVPs are offered with the FLEX treatment, although obviously you won’t need any FLEX fore-ends for them. The one MVP that can’t use FLEX buttstocks is the military/police oriented MVP Patrol. Light-kicking 20 gauge FLEXes were a no-brainer and centerfire bolt-action FLEXes were a pleasant surprise. Mossberg’s Linda Powell really blew us away, however, with the final FLEX surpise: this .22 FLEX 702 semi-automatic.

The FLEX buttstock makes this the perfect choice for young shooters, and it also turns this (let’s face it) pedestrian .22 autoloader into a totally bitchin’ takedown rifle for camping or truck-gun duty. The 702 FLEX was kept under such tight wraps that even Mo own Director Of Media Relations only learned about it here at the show. The Ruger 10/.22 Takedown and Marlin Papoose have just got some competition. Unlike those two takedown .22s, you can still fire the Mossberg 702 Flex when it’s broken down if you have to.

Most of the guns in the Mossberg catalog are now available as FLEX models, and I say this is a bloody good thing. Nearly any Model 500 can now be a convertible, scaleable takedown shotgun, and almost every MVP rifle offers similar portability and versatility.

What didn’t Mossberg FLEX? It’s actually kind of a short list. You can’t FLEX an AR-platform rifle because of the buffer tube (AR’s are modular enough already) and you also can’t FLEX the Model 930 because the autoloading shotgun’s recoil spring rides within the wrist and buttstock. Basically everything else in the catalog, with only a few exceptions, will be takedown guns that can switch buttstocks across calibers and model numbers.